Thanks to everyone who joined us at last month’s ALL STARS event! For those who couldn’t attend, here are the “Lost in Translation” stories you missed – and for more photos from the talented Art Montes, check out this album on our Facebook page! 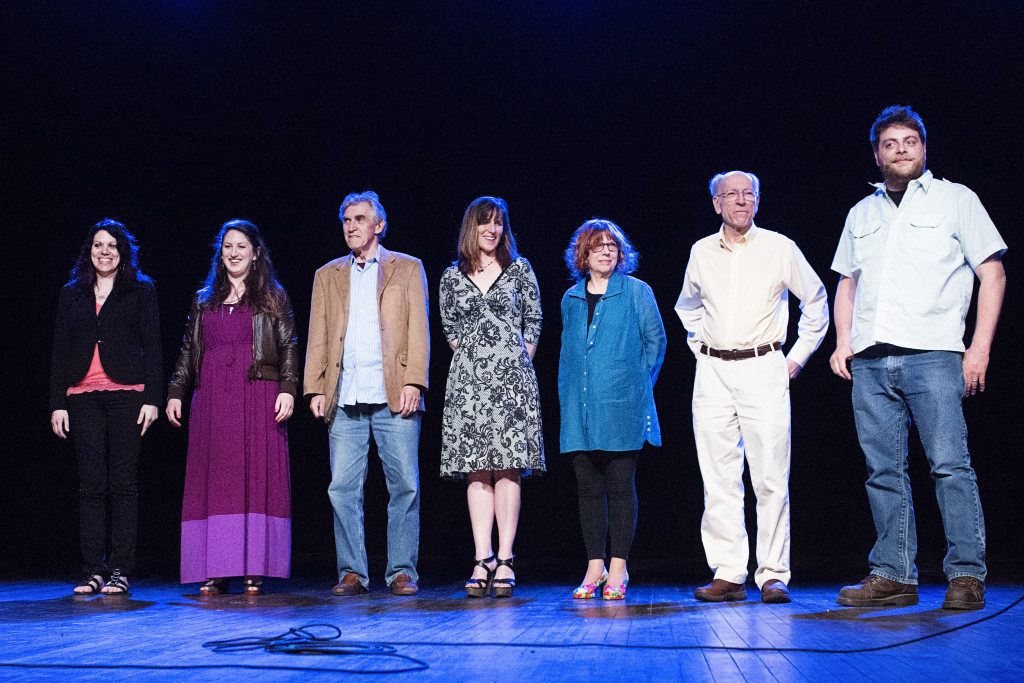 Carl ‘Quittin Time’ Fuerst kicked off the show with an account of his very first summer camp experience: his mother dropped him off with a garbage bag full of his belongings and no sense of direction. After failing miserably to find inspiration during “free time” – aside from testing all of the water fountains – Carl decided to stick with helping the two, very Italian, old ladies who reminded him of his Grandma. Despite, or perhaps in spite of, a thick language barrier, the two women quickly put him in charge of manning the center and taking care of the animals. Out of that blossomed Carl’s ability to step outside his comfort zone, leading him to be the man he is today.Molly Snyder shared the story of her love and need for religion from a very young age, noting that she wanted to be an “epicopalian” though her parents were retired from faith. From her first religion, Girl Scouts, through a series of interesting explorations, including the Grateful Dead and the Easy Bake Koven, Molly gained a lot of insights and uncovered truths. Yet, when she really needed it, faith seemed to desert her, so Molly finally settled on a more universal religion. Ironically, her husband’s divorce attorney offered the deep compassion that led to Molly declaring, “People are my religion.”

Rich Christensen told the most touching story about his parents’ love and the dots he connected to finally understand the big picture. Five days after Rich was born, his mother received the telegram stating that his father had been shot down mid-flight for the third time while serving; he was missing in action. For four weeks, Rich’s then-twenty-one-year-old mother waited, not knowing whether her husband was dead or alive. Rich pointed out to a hushed audience that his father’s survival made both of his parents aware that every single day is a gift, an awareness that they passed on to him.

Becca Segal told the story of how her “pieces of self” were put to the test as she left her “very Jewish” hometown to explore the world. Following high school, Becca found herself having to, for the first time, defend her Jewish heritage. After some viciously anti-Semitic responses in France, Becca grew to be less proud of some of the “pieces” that make her who she is. However, her pride was reinforced when she stumbled across a traditionalist synagogue in France, where the Rabbi questioned her intensely about couscous and she fell in love very briefly with a very religious man. Getting lost in her own culture ultimately helped Becca find herself.

For Dave Hendrickson, once again the audience favorite, young adulthood came in the form of a Savage shotgun he received on his thirteenth birthday. His father, a carpenter and good hunter, wanted to ensure that his son didn’t grow up to be a cream puff – any man who willingly wears a bowtie, works in an office, and plays golf – like the in-laws. After months of practicing on glass bottles, it was decided that Dave was good enough to really go hunting. And as he stood aiming at the squirrel that his father had picked out, struggling to find the words to explain that he just couldn’t do it, the most unexpected thing happened: Dave’s father said “aw, that one is kinda small,” and in turn gave Dave permission to be himself. Jennifer Evenson’s story bordered on nightmarish as she recounted her efforts to find a roommate speedily due to financial problems. And, where else would she have gone to find this roommate but craigslist? One after another, increasingly strange people replied to the online ad, and with increasing alarm, Jennifer changed her requirements in the post. From posting that she was SERIOUS about not wanting a date, to noting that she would do a background check, Jennifer seemed to endure it all. But, for every nightmare there has to be a happy ending, and this one came in the form of a normal, law-abiding, and clean female who rented the room.

Lady Linda, the Ruler of Times Cinema, was back and as intense as ever. Ms. Cieslik described, with incredible detail, her traumatic ordeal at defibrillation training. After signing up for the volunteer defib class, upon making it very clear that she was not signing up to do CPR, Linda showed up to class only to find that CPR was the least of her concerns. Working with dummies that may or may not have had traces of her colleagues’ saliva seemed like child’s play when Linda realized that she would have to strip completely the person on whom she would have to perform the defibrillation. This, of course, brought an onslaught of mental images that Linda can’t erase to this day.

All in all, it was a lovely end to our forth season. Thanks to all the audience members who joined us as well as all the volunteers who made it happen!

See you in the fall!