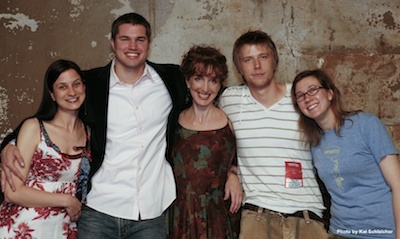 Ex Fabula was born in October 2009 when the 5 founders – Adam Weise, Amy Schleicher, Leah Delaney, Matt Sabljak, and Megan McGee – met for lunch at Maharaja Restaurant and discussed starting a storytelling series in Milwaukee. We agreed that true, personal stories have a unique power to create connections between individuals, and we hoped to magnify that power through live events to provide meaningful local experiences. The fledgling organization was christened “Ex Fabula” – from the Latin for “from stories.”

Six weeks later, Ex Fabula debuted at Art Bar, where a crowd of 65 gathered to hear stories on the theme “Beginnings”. Increasingly large crowds caused us to seek larger venues and the enthusiastic embrace from the community showed that we had tapped into a strong need. In our first season, we hosted 7 storytelling events at 7 different locations across 5 distinct Milwaukee neighborhoods.

During our second season, our monthly event series alternated between Riverwest and BayView neighborhoods. We also introduced a new annual event, the Ex Fabula Spectacular; for this special noncompetitive event the Ex Fabula volunteers select individuals from past events who were not Audience Favorites but whose stories were especially compelling – and invite them to take the stage and share new, longer stories.At the end of our second season we kicked off the Terminal Milwaukee project, a seven event series that explored and celebrated the diversity of Milwaukee’s neighborhoods.

During parts of our third and fourth seasons, we completed a 6 month residency at the John Michael Kohler Arts Center in Sheboygan. This residency allowed us to further develop our workshop curriculum and as well as experiment with Spanish language programming.

In January 2014, midway through our fifth season, we hired Megan McGee as Executive Director – our first full time employee. This allowed us to expand our programming in several ways. In response to requests, we began offering storytelling workshops for the general public and to community groups. We also created the Ex Fabula membership program and held the first Secret Fabula event.

Over the next seasons, inclusivity became a special focus for Ex Fabula. We partnered with organizations all over the city to present workshops and StorySlams. We kicked off a pilot of the Puente Project in Season 6  and expanded the program in Season 7 in order to present the first English <> Spanish Bilingual StorySlam in the United States. We added the Ex Fabula Fellowship in Season 7 and the Equal Access Project in Season 8. These Community Collaborations enabled us to serve individuals from every zip code in the city and to increase the diversity of our storytellers, volunteers, and audiences.

As our programming grew in response to requests from the community, so did our small staff. At the start of Season 8, Public Ally Carolina Mulvey-Videla started a 10-month term as Community Connector. We said goodbye to Carolina at the end of season 9, and brought on our second ally Sam Woods, who served with us until the end of season 10. This role is now being filled by Michaela Lacy, who joined us in Season 11 and will be doing a fellow year up through season 12. The summer prior to Season 9, Kennita Hickman joined the staff as Event Producer. In season 11, we welcomed Alea Mchatten to our team as our Event Producer when Kennita took an excellent position at Imagine MKE. We also brought on our amazing Marketing Guru Nicole Acosta, as well as additional storytelling coaches, many who started as workshop assistants in order to gain experience and then gradually took on more responsibility.

Along the way, we’ve been recognized for our efforts. For example, we received a 2020 MANDI award for the Deaf StorySlam we presented in partnership with Milwaukee Public Library and the Deaf community.

Our newest project, is our Brave Space Project that was introduced in season 10. This project allows us to host workshops that operate as affinity spaces for folks of shared identities. Through this we have had the opportunity to hear stories from Fathers Of Color, Veterans, Black Professionals and more! This project is growing every year and we look forward to continue to do the work to connect Milwaukee through real stories.

Be sure to stay tuned for more stories and conversations!