It’s that time of year again when Ex Fabula concludes another great season with an ALL STARS show! On Wednesday, May 14th Ex Fabula’s ALL STARS show at Turner Hall Ballroom featured the Audience Favorite storytellers from the past season. This time, they told new tales on the theme “Nitty Gritty.” Emcee Leah Delaney led us through the evening with fun facts about the ALL STARS and by reading audience UltraShorts. 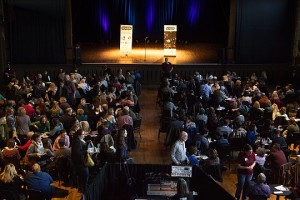 All Stars at Turner Hall. Photo by Art Montes.

First ALL STAR to the stage was Alecia Altstaetter, who told us about an “un-endearing” phase in middle school and how she survived. Next, Jennifer Hoepner shared how through learning family history, she grew to understand her mom. Then, Aims McGuinness shared a story of a foreign exchange trip to France, dental floss, and why “I don’t know” isn’t always the best answer.

After a brief intermission, we heard from our next round of ALL STARS. First up, Rick Karlson revealed what saved him on a night when adolescent mischief took a frightening turn.  Then, Molly Snyder recalled questions her second-grade son asked, including one that made life pretty awkward. The last teller was Brooke Maroldi, who told of her now-elderly mother’s fabrications about meeting famous people, and why a little make-believe can be a good thing.

After listening to the storytellers, we were treated to a Spoken Word performance by special guest Bobby Drake who told truths about expecting more and pursuing dreams. Bobby Drake is a Nominee of the 14th Independent Music Awards in the Spoken Word category for his album “Hands Down.” 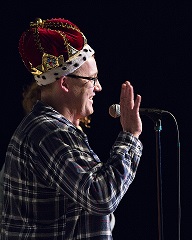 Once the audience votes were tallied, the winner was announced: Aims McGuinness! Congratulations Aims on being the Season Six Audience Favorite! We would like to thank special guest Bobby Drake and all of the night’s tellers, and everyone who shared a story on stage this season. Thanks to Turner Hall for being such a great host. We would also like to express how grateful we are to all of our volunteers, members, and sponsors for making this season possible! Stay tuned for Ex Fabula events happening this summer, and we look forward to seeing you at our first StorySlam of Season Seven in September!