Skip to content
Home/Recaps/Change of Heart Recap
Previous Next

When February arrives, it will be impossible to escape the talk about matters of the heart. Before the Valentine’s flood begins, we gathered for the first story slam of 2017: Change of Heart. On Tuesday, January 10th, we met at Sugar Maple to talk about the sweet and sticky situations that arise during a change of heart.

We started with a rare treat – a triple team of storytellers. Russ and Kery Kafka and their daughter Meghan Koven shared their (mis)adventures during a rafting trip through the grand canyon. 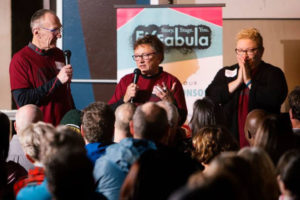 Though Kery was excited at first, 8 days of grueling hikes, rafting in 48-degree water, and relieving themselves in buckets convinced her she never wanted to see another rock.

Rob Harrington’s story also involved a trip: studying abroad in Salzburg in 1991. Playing soccer abroad tested his endurance, but by the end of the week he was holding his own and the coach invited him to join the team. By that time Rob had had a change of heart. His true calling, he decided, was in Prague with a cold beer.

Carly Kroll went third, introducing us to her friend Charlie, the Canadian goose. Carly raised Charlie from the egg and taught him to fly, but eventually he left and started a family. Though at first she was bitter about losing the friend she had loved, eventually she realized it was his time to spread his wings and fly. 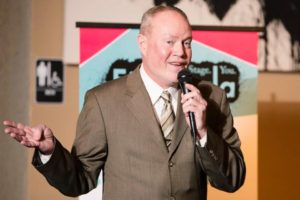 New teller Tom Jones brought us the story of his friend Wilbert. Wilbert, an 18-year-old black man, managed to change the heart of his governor, the infamous segregationist Orval Faubus. Over a 2-hour conversation, Wilbert convinced the governor Faubus to write him a recommendation letter.

Tom Matthews also had a goal at age 18: becoming a garbage man. The summer after high school his dream came true. His first day was not what he expected, however, and his dream soon changed.

The last new teller was Sierra Bass, a local spoken word artist. She hated performing without her team, but had a change of heart when her solo performance inspired an audience member to find their own voice. 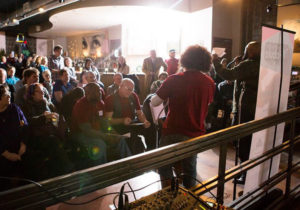 Bill Stevens told next. His doctor wouldn’t schedule a hip surgery in case Bill had a change of heart and skipped it. On top of that, they kept him laughing so hard through his cortisone shot that he never saw the needle.

Sue Blaustein went next with story of her grandfather, a successful gynecologist. His life started to unravel when he was arrested for falsifying birth records. He would assist women with unwanted pregnancies by putting their babies up for adoption – but his career ended after one of them had a change of heart.

Catherine Miller finished the night with her personal journey to come out as bi-polar. She never liked hiding the truth, but seeing friends turn away from her because of her identity left scars. These days however, she’s had a change of heart and decided to “go for it.”

After a night full of heart, the audience spoke and named 2017’s first winner: Tom Matthews. We are grateful to our season sponsors, volunteers, members, event sponsor Lulu Café and Bar and event host Sugar Maple for a fantastic event. We hope to see you on January 28th for the New Year Spectacular!