The road from the John Michael Kohler Arts Center to Turner Hall is long, but we finally returned to Milwaukee this past Thursday to open our 2012-13 season. The event went off without a hitch thanks to the tireless crew at Turner Hall and the generous support from 91.7 WMSE, 89.7 WUWM, Transfer Pizzeria & Café, and YELP! But of course, the evening wouldn’t have been worthwhile without you, the lovely audience, for whom we share these true and personal stories.

The theme for the evening was “Game On.” An ironic choice for our non-competitive story spectacular, but what the heck. The storytellers were hand-selected crowd favorites from years past, and boy did they bring their game. Luckily, everyone was a winner that night.

Tracy Lehrmann knocked out the crowd in the first round with her story about finding the will to fight after a harrowing encounter with an intruder in her apartment. Left with a glorious rage, she took up sparring with an inspiring and relentless coach, and eventually fought her way to the Golden Glove Boxing Championship. “Leave it all in the ring,” her coach told her before the match, “Don’t take any of it home with you.” After a cathartic fight that went to decision, she moved on but her story reminds us that true heart is found in the ability to endure tremendous amounts of pain and then keep going. And on Thursday night, Tracy, who will henceforth be known as the Queen of the Dramatic Pause, left it all on stage. She didn’t take any of it home.

Andrew Larsen took up the stage and brought us into the elaborate and perhaps misunderstood world of live role-playing games. His story revealed the unexpected joy that can come when our plans and actions have unintended consequences. As game-master, the player tasked with inventing the story of the game, Andrew led his compatriots on a two-year quest through his created universe based off a twist on traditional superhero mythology. Before the epochal battle was fought, a player struck a secret deal to kill-off his character (albeit for a self-serving end). Like a Russian chess wizard, Andrew constructed the players’ movements through the battle and forced a sacrifice that resulted in an unexpected display of compassion. Indeed, we live most fully through the characters we create, in games or in life, and find purpose in power of a story to bring out the best in us.

“When does a dream begin?” asked Evelyn Prevenas of the crowd. For Evelyn, it began 20 years ago when her son asked if she’d come along to watch him attempt a parachute jump. This seemingly innocuous event planted a seed in Evelyn’s mind that sprouted 12 years later. After again witnessing the glee on her son’s face following another successful dive, Evelyn made up her mind to take a leap of her own. The next year she found herself on the rattling tin floor of a Cessna climbing the sky, filled with the fear of all 10,000 feet between her and the ground below, and decided that chickening-out simply wasn’t an option. Well, six more jumps followed and Evelyn has since lead groups from the local senior center jump and even the mayor of Sheboygan (not the one in all the headlines). If you have a dream, large or small, even some scary like skydiving or challenging as a marathon, step out of your comfort zone and take the leap. You’ll never regret it.

Our next storyteller, Tom Dillon, was inspired by Churchill’s old chestnut, “If you find yourself in Hell… keep going.” Tom took that advice to heart when he found himself in his own personal hell: St. Sebastian’s Catholic School. He endured the taunts of his classmates until grade 5 before joining the basketball team to turn things around. Now Tom was no stranger to competitive sports… he also bowled in a league with his Aunt. And he made it three practices before coach announced that their games would be played at the very same time as his bowling league. His mother, not the most tactful woman, summarized his dilemma for him: “Who are you going to let down?” In case anyone has forgotten the sublime cruelty of children, the only thing worse than telling your classmates with a face full of tears that you’re quitting the team is having your mother do it for you. We can only hope the he and his aunt won the league that year. 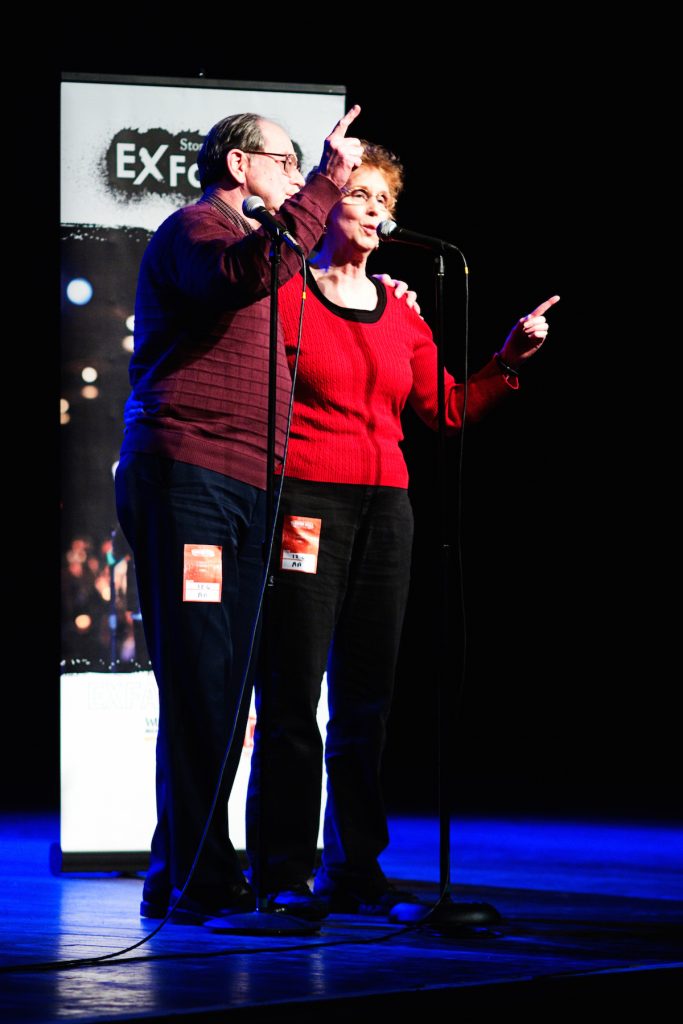 Frank & Mary Koczan brought back the fight to the second half with their story about fighting The Man. After finding the perfect home in lovely little Haven, WI, their dreams were dashed when they heard on the wind about the new neighbor coming to town: a nuclear power plant. Newcomers to the game of environmental advocacy, they were roused by the upcoming birth of their first child and utilized their talents as music teachers to write the movement’s protest anthems. Shivering in the night, they led a chorus to the tune of Rosin the Bow, “Power plants need water for cooling / And that’s why their future is stark / Just who do they think they’ll be fooling / When Lake Michigan glows in the dark.” The next year, with their newborn child in their arms, they celebrated the announcement that the WI Power & Light were scrapping their plans and the town of Haven would never face the dangers of a nuclear catastrophe.

Somewhere floating around Milwaukee is an esoteric scrabble cheat-sheet. Vowel dumps, obscure “Q” words, and a host of two-letter gems. Katy Richter tracked down the underground scrabble club leader guarding the list and decided she wouldn’t leave until she had a copy of her own. Now, underground scrabble is not your grandmother’s Sunday afternoon board game. After accidentally challenging the group’s self-proclaimed master “Bob” (whose cocky attitude made him more of a “Richard”) and crushing him, she was roped into match, after match, after match. Luckily, she made a daring escape during a scheduled bathroom break (that’s right, scheduled), but was still invited back the next month. They couldn’t get their game on without her. 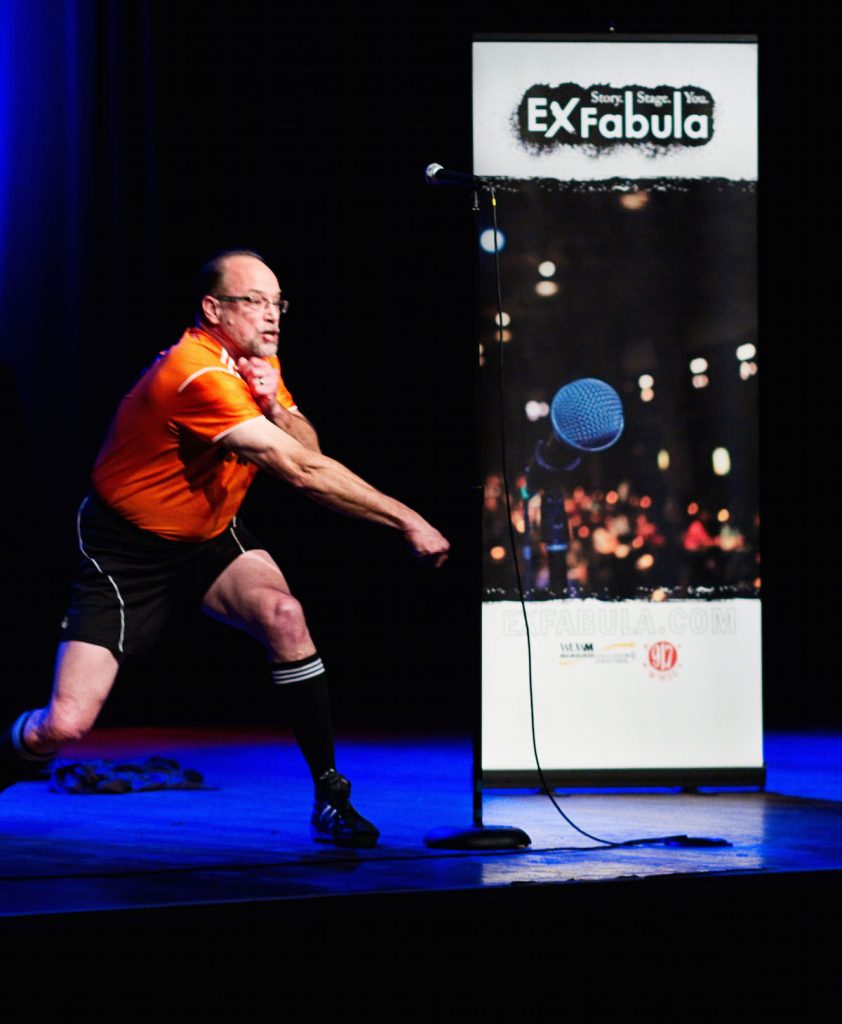 Proudly donning his orange and black soccer kit, Tom Strini rounded off the evening with a moving collection of vignettes revealing how his athletic history has threaded his career with luck and chance. From his first ratty flannel uniform sponsored by “Comet Cleaners” to the princely polyester pinstripes sponsored by the local barbershop, he grew up in love with the magic of sports. But in high school, when his Dad wouldn’t cough-up the $10 insurance coverage for the football team, Tom took his drive to another passion: the theater. After all, you didn’t need special insurance to act in Oklahoma! This turn of events blossomed into a 27-year career as Music and Dance critic for Milwaukee’s own Journal Sentinel. Over the years, Tom has never given up the thrill of competing on the pitch, reminding us that we are often more ourselves during our days off than our days on. 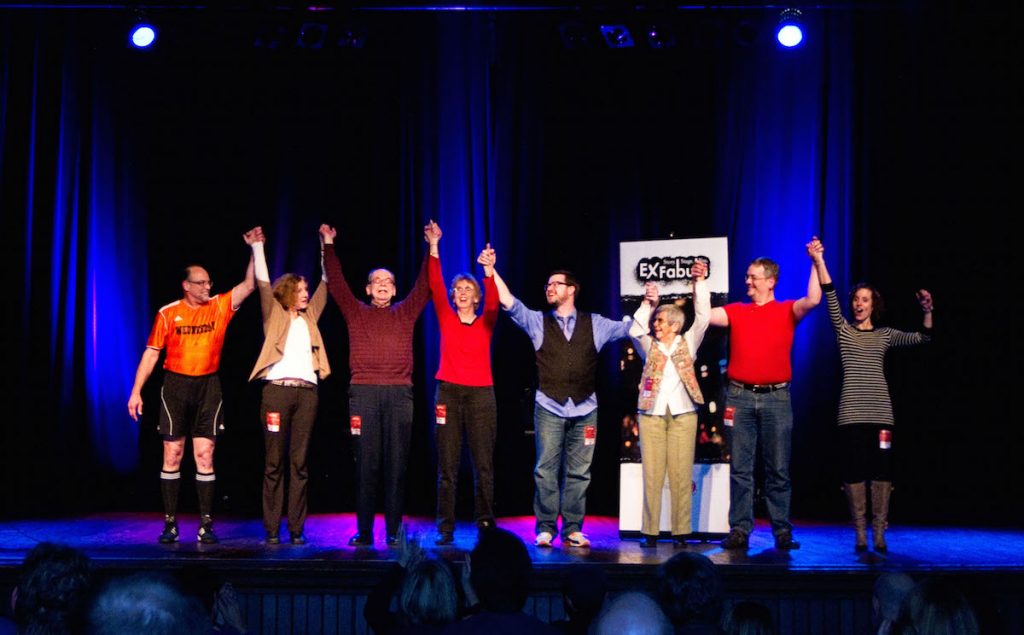 If you want to be part of Ex Fabula, let us know! We have loads of chances to volunteer ranging from helping to run the live shows to working on one of the committees that keep things copacetic in between shows.  Also, be sure to stop in for our next show at The Times Cinema in Washington Heights on January, 15 for stories on the theme “Do Over.”