Our latest StorySlam event, “Eutopia,” drew a full house at Anodyne Coffee Roasting Co.’s Bruce St. location on November 4th. While both “eutopia” and “utopia” are pronounced the same in American English, their derivations in Greek differ; “utopia” is likened to “no place” while “eutopia” means a “good place.” The theme of tonight’s competitive slam asked audience members to describe their own Eutopia. 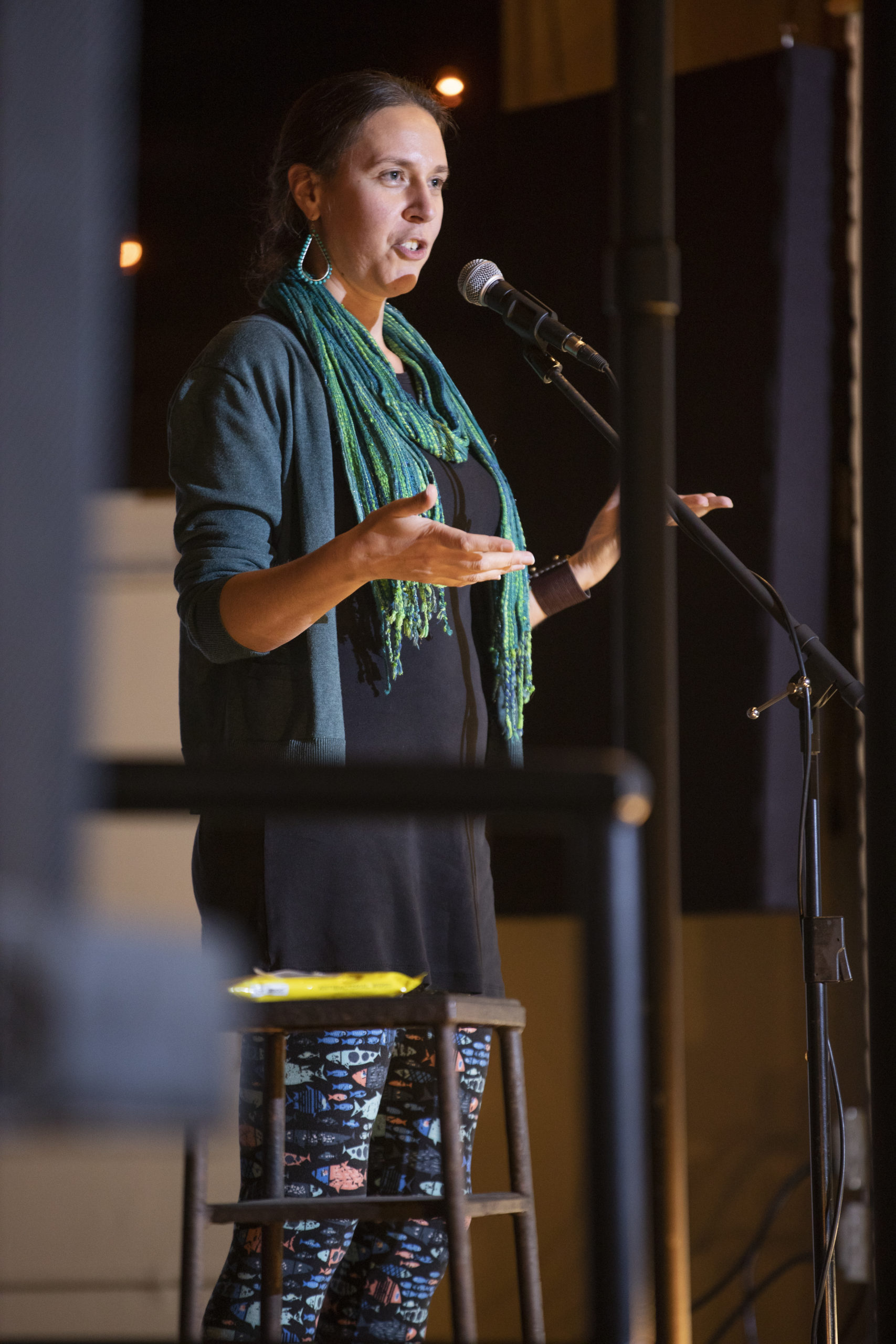 Our first teller of the night, Leah Anderson, joined “Weight Watchers” at age 11. She spent years miserably restricting her diet, paranoid about her weight & appearance. Some years later, she found herself diagnosed with breast cancer. She was aware of the risk of weight gain resulting from chemotherapy and radiation. Her concern over this triggered a fresh round of extreme caloric restriction, leaving her with barely enough energy to function, much less thrive. Leah recounted the emotional moment when her daughter asked her when she was “going to stop dieting.” At that instant, she resolved to eat for energy and listen to what her body was telling her from that point on.

Jim Winship seems to have a million and one stories under his belt. He told about his career as a professor of social work and how this work formed the basis for his life’s passion. He has traveled to El Salvador at least 26 times throughout his tenure and continues to visit regularly while working on a documentary about his efforts to improve the lives of the people he has met along the way. El Salvador is one of the most underprivileged countries on the planet, and doing what he can to not only help but to bring that knowledge back here to educate others has become Jim’s Eutopia. 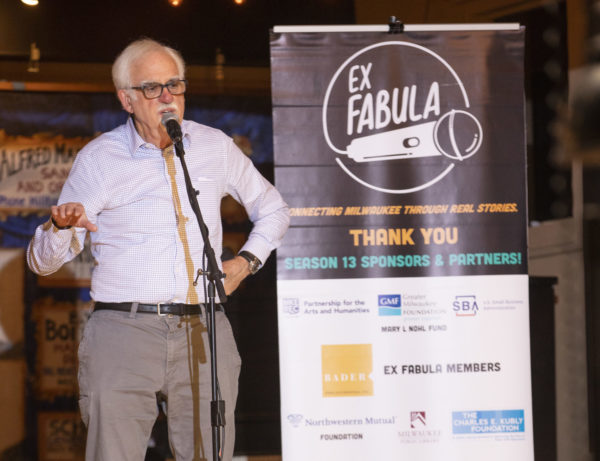 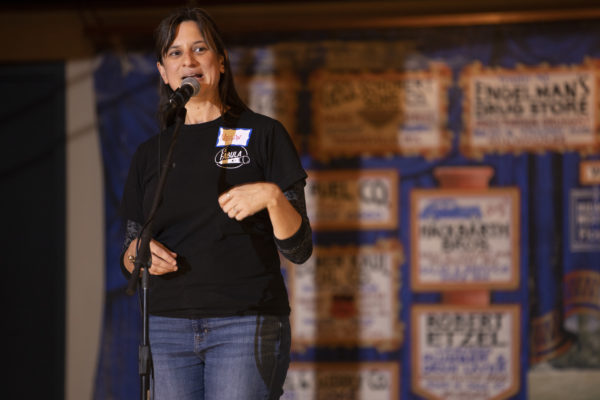 Megan McGee, Executive Director at Ex Fabula, spoke of her journey with the organization from its inception. Megan recalls a previous StorySlam evening where the team was severely understaffed. She was covering for multiple people in order to keep the event moving when, amid this chaos, with a teller on stage, she hears someone bust out the “N-word.” It became damage control- ‘where did we go wrong, did I do something wrong, how do we prevent this in the future, did I hear all of that correctly?’

Not every event can always be a eutopia or go off without a hitch, but Megan encourages white people to continue to do the work, be aware, and put in the time.

Kelly Shafer, a first-time storyteller, began by explaining that she had been hardwired to just “get through life.” After her two close brothers moved to opposite sides of the country and her dearest dog passed away, it left her feeling isolated and depressed, living with her parents with whom she had never been close. This wasn’t her first battle with depression or suicidal ideation, so when Kelly’s thoughts began spiraling, it scared her, so she checked herself into a hospital. She found her stay challenging but also full of humor. While before, she often looked for a eutopia and safety in others, this experience taught her that she needed to find it within herself and become her own safe haven. 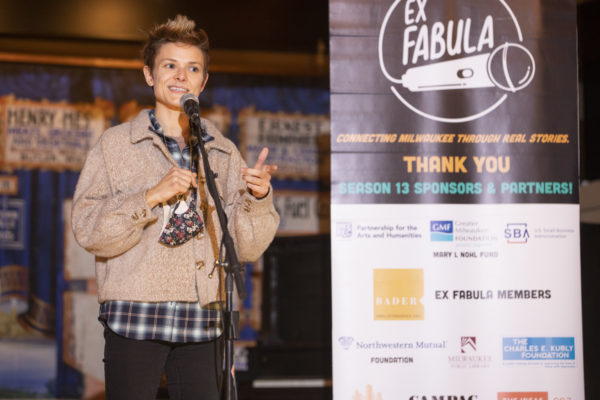 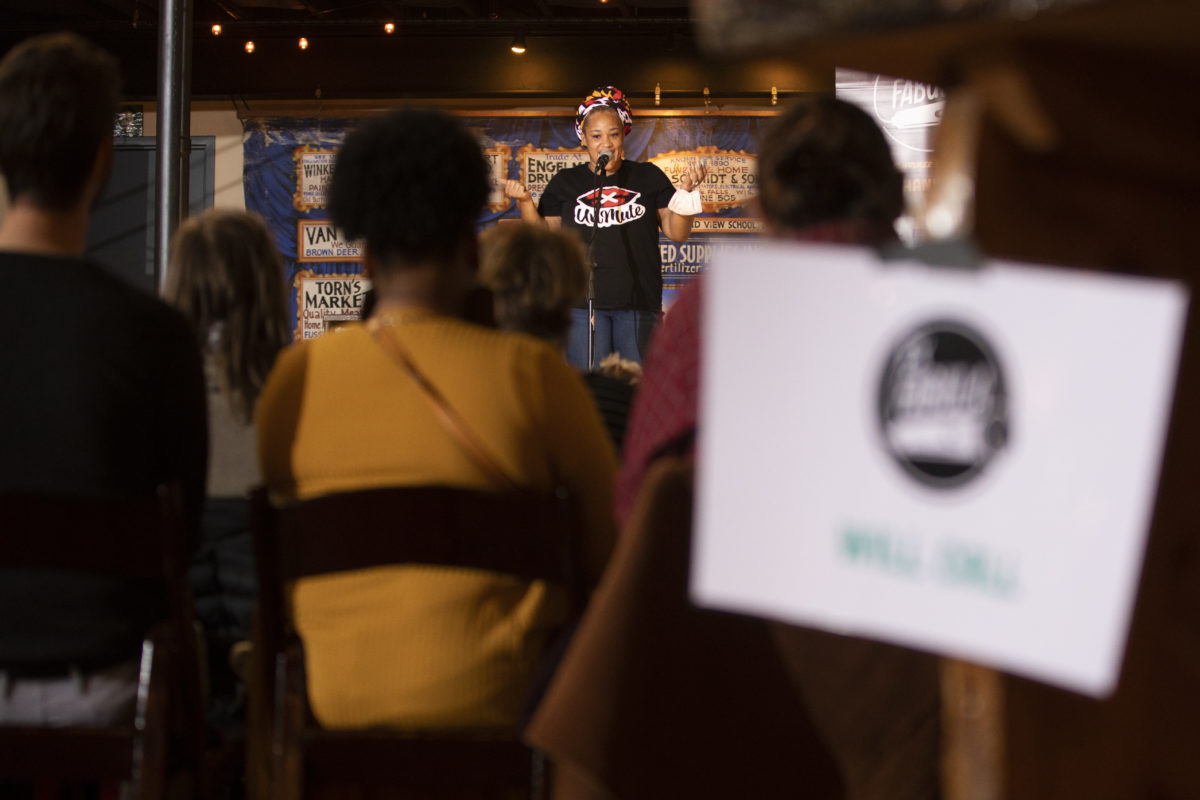 Nubian Star had children after many years of not wanting to become a mother because of her experiences with her own mother. Still, she found herself pregnant, and then that child was followed by three more! When the Covid pandemic rolled around, and virtual learning was in full swing, she found she had been thrust into a more trying and tedious job than she’d ever anticipated. Life was filled to the brim with chaos, and that was on a good day. She was tired. She didn’t know how to navigate or even teach half of what her children were expected to learn, and her job was around-the-clock, seemingly without end. Yet as time went on and she was able to take a step back, she found that it wasn’t just her children who had learned a plethora of new life strategies. She now eloquently refers to herself as the “Domestic Goddess.” While she finds the eutopia in her children, she also found it tonight, at Anodyne, where it was her first night away from children since pre-pandemic.

Murali Vedula was a man who’d worked all his younger years and is now well into his retirement. He’d always wanted to take a stab at the piano, especially since his last son had moved out. There’d always been one in the living room… collecting dust. “Why not?” Murali pondered. So one day, there he was, white-knuckling the steering wheel, on his way to his very first lesson. Unable to interpret a lick of written music, he steadily practiced and learned. Soon he found he could play all sorts of tunes and was shocked at what he could accomplish. His Eutopia, he found, was retaining that child-like wonder and harboring that curious enthusiasm. You really can teach an old dog new tricks! 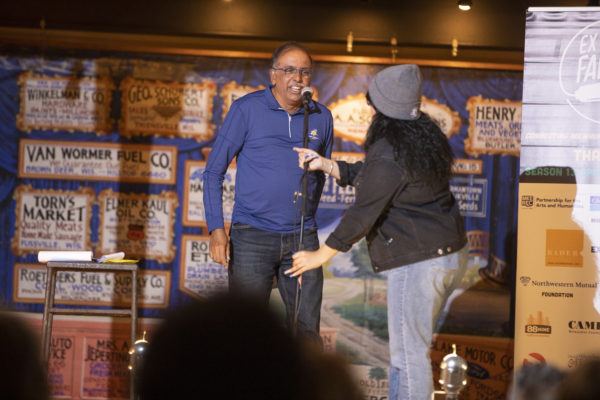 Amanda Fahrendorf was a Riverwest Food Pantry veteran, braving it daily throughout the pandemic, choosing to forgo visits with family for months at a time so that she could help those in greater need. She recalled a specific time when the pantry was about to close for the night. She saw this woman roll up in a van. The driver painfully detailed her story as the sole breadwinner of the family. At one point, she looked in the rearview mirror and, with a deep sigh, described what a mess she was in. She wasn’t sure how she could feed everyone. Amanda realized that she too was a mess, barely holding it together to keep the pantry open. And although both women were in a state of grief from similar yet unique experiences, at that moment, Amanda realized the benefit of her sacrifice; that was her Eutopia.

The 8th teller of the night, Rhoan Garnett, is originally from the Virgin Islands but traveled to Maine for college. His college experience was full of challenges, and after he completed his doctorate, he came to Milwaukee in order to help other kids from poverty or violence-stricken backgrounds navigate the US University experience. Rowan’s Eutopia assists others in the same position he once found himself in. 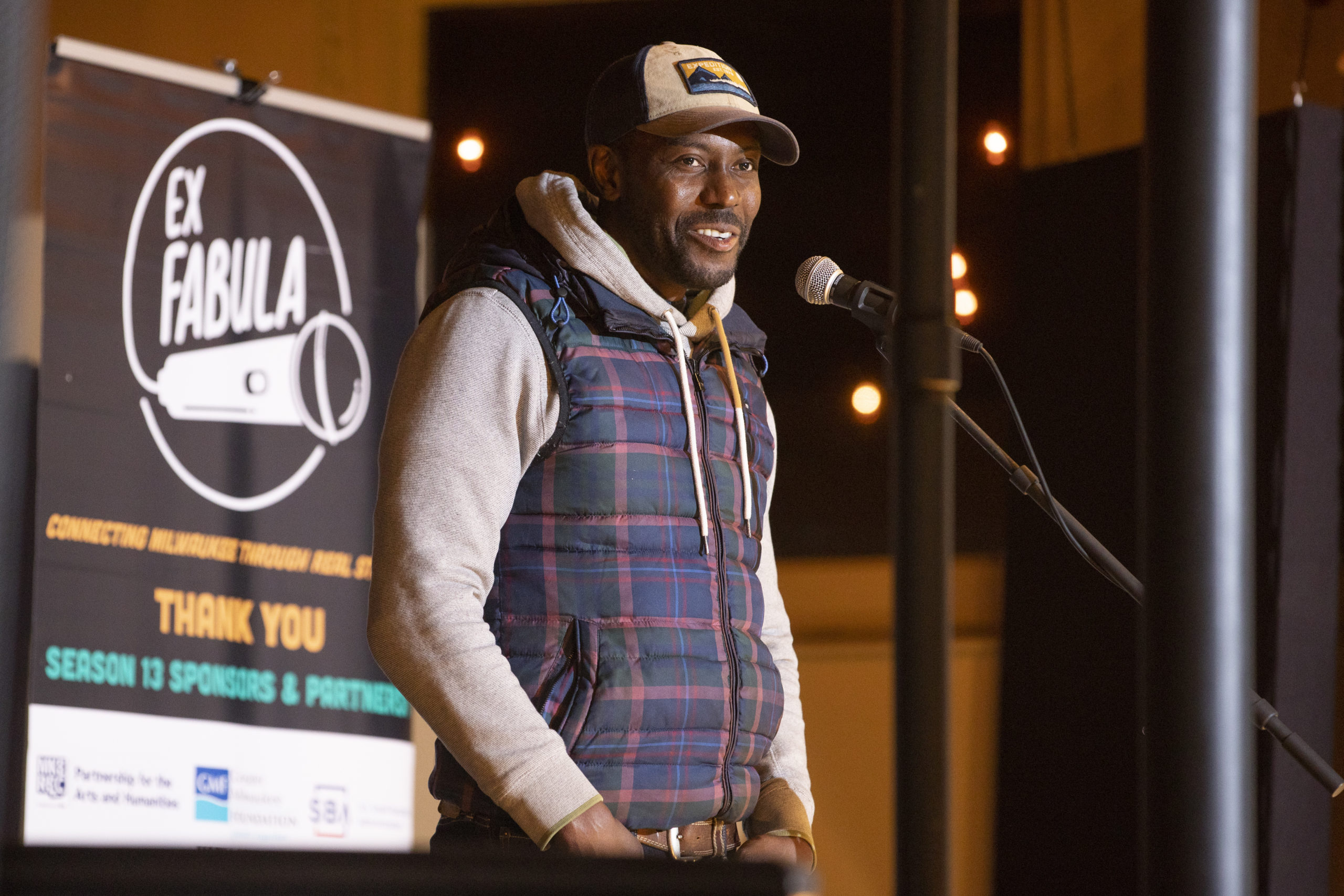 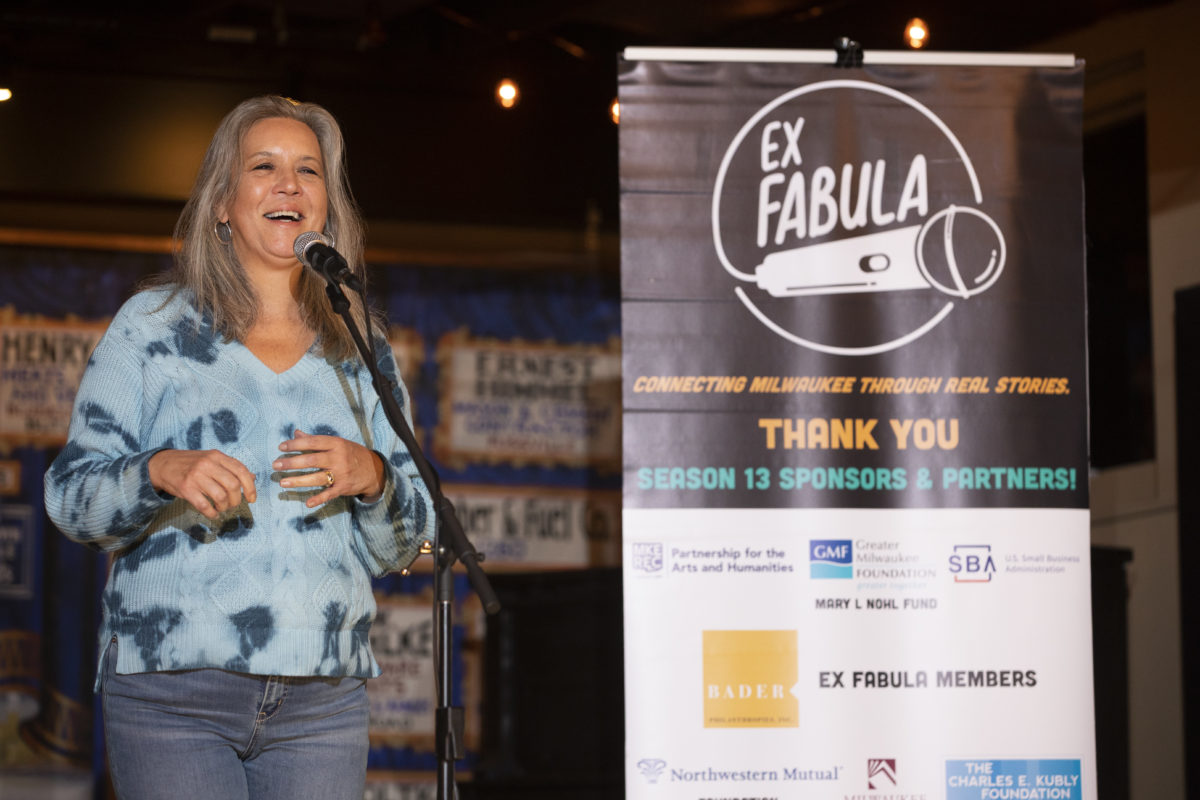 Elaine Maly, a seasoned storyteller, began her story with an invitation from a friend to attend an all-women music festival set in the backwoods of Michigan. “Just please, no drugs or lesbian sex!” were her husband’s only requests. Elaine was pleasantly surprised to find it was so much more than a raging lesbian sex festival. The grounds were jam-packed with thousands upon thousands of people from different walks of life, of different ages, looks, and afflictions. Everyone was required to work various shifts, whether on-stage, in the kitchen, or otherwise. Elaine explained that this festival was exceedingly spiritual. The overwhelming sense of safety was a luxury she’d never known; that was Elaine’s Eutopia.

The final storyteller of the night was Nicole Irland, with a story of her obsession with to-do lists. Growing up in a less-than-ideal environment, Nicole began a love affair with to-do lists to gain a sense of control. She began to find that she wasn’t satisfied unless every to-do list task could be fulfilled, and only then would more opportunities seemingly appear before her eyes. This became a problem that inevitably spiraled. Recently Nicole has experienced some spontaneity and a sense of freedom in letting go. She wondered how she could go on living in this controlled manner if letting go felt so incredibly liberating; now, this is her Eutopia.

Ultimately, we all have our Eutopias, whether we stumble across them or work toward them for the sake of ourselves or others. The story of our personal Eutopias often shifts, growing and changing along with us. Often the human experience is just that: a utopia, a sort of place we ponder but doesn’t really exist; we often waste away fantasizing about a Eutopia that can only happen when we do something and push towards change.

As the audience deliberated and the votes were in, novice storyteller Kelly became the honorable winner of the evening!

Thanks to Anodyne Coffee, the storytellers, the volunteers, and everyone who joined us at the Slam. Thanks also to event sponsors Bronze Optical Gallery and Landmark Credit Union and all the fantastic season sponsors, including Transfer Pizzeria,  90.7 WPR, SRH Marketing, WUWM 89.7, and 88Nine Radio Milwaukee. About the Author: Salem Indie