The crowd turned out again on March 24 to listen to fellow Milwaukeeans share true stories from their lives at Ex Fabula 5 at Mo’s Irish Pub in Wauwatosa. The theme of the night was “Luck”. Co-founder and MC Leah Delaney introduced the night’s storytellers, some of whom being drawn from audience volunteer hat. We’ll be posting some selected stories from the event over the next few weeks. 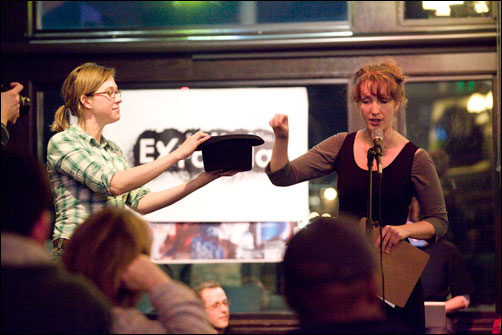 Marcella Kearns kicked off the night with a Solo story about attempting to win the affections of a man using her super power of winning scratch off tickets.  The next two Solos, both randomly drawn from the hat, happened to both focus on crashes. First, Drew Brhel talked about an extremely lucky car accident after his friend had an epileptic brownout; the ambulance in the lane next to them was “fortunate icing on a very lucky cake.” Then, Grant Hagen recounted a helicopter crash in Vietnam. “Airplanes want to fly,” he mused. “Helicopters don’t. They want to crash. …When you don’t have hydraulics, they don’t work very well.”

For the Terkel of the night, Matt Sabljak interviewed his friend Clif Phelps. They met several years ago via Mosaic, an organization that combats racism by bringing people of difference races together. Clif shared accounts of a couple of kids he has known through Running Rebels Community Organization. One initially reluctant student ended up become an A student who attended Tuskegee University. The other was on his 9th year of a 12 year sentence in prison. Then, Dan Zarwell recounted tale of an incident with some drunken skinny-dippers that were running from the police and the lengths he and his roommate Jim went to in order to free one of them from the trunk of a confiscated car. Following him was authentic Irishman and luck-skeptic Padraig de Burca took the stage to share a tale straight out of an action movie; “running down a dark alley after a fugitive, late at night – life doesn’t get any better than that,” he fondly recalled. 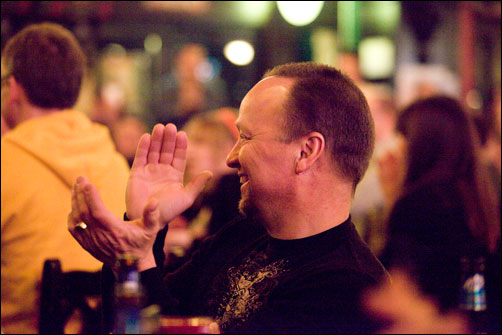 The last section of stories started with Stacy Williams-Ng had to promise to her mother that she would not contact her biological mother. When she was 18, her dad told her birth mother’s name and she was able to locate a picture. Stacy wondered if that was all she would know until a chance encounter with a birth family relative luck in a college class. Then she was faced with the momentous decision of what to do with this stroke of luck. 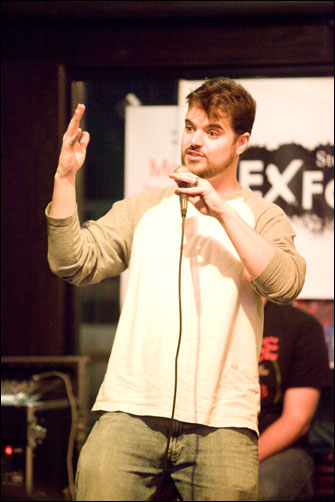 Anthony Umlauf bought a 1973 cutlass for $50 and had it for a year. One day he realized it was on fire as he was driving. Not wanting to pay for a tow, he drove the car while it continued to burn from Kenosha to Twin Lakes. He sold the car for scrap and managed to make back his $50.

The Rashomon ended the night with James Carlson and Jenn Turner of Bucketworks telling two sides of an “urban spelunking” adventure, during which they discovered an abandoned building full of antiques and artistic creations. The highlight was a 30 foot, yellow, beer-drinking robot made out of pieces of cranes, backhoes, and other industrial equipment. “We will not give the coordinates,” James quipped, while simultaneously giving the impression that he would be delighted to share them with anyone who asked. 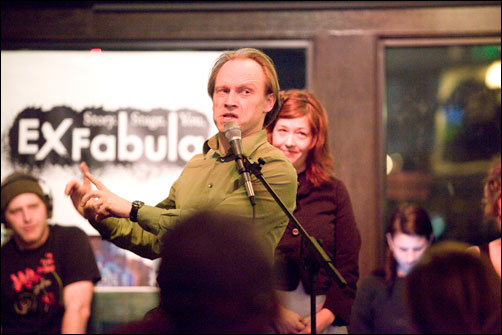 The audience provided many memorable Ultra Shorts read by MC Leah Delaney that will be posted here over the next few weeks. The end of night audience vote was awarded to Drew Brhel’s lucky epilepsy car crash story. Drew picked up a 5 CD Set from World Café contributed by sponsor WUWM and bragging rights. He’s also invited to participate in Ex Fabula ALL-STARS on May 14, where winners from this season’s events and a few special guests will face off to tell all-new, longer format stories on the theme “EPIC FAIL” at Turner Hall. 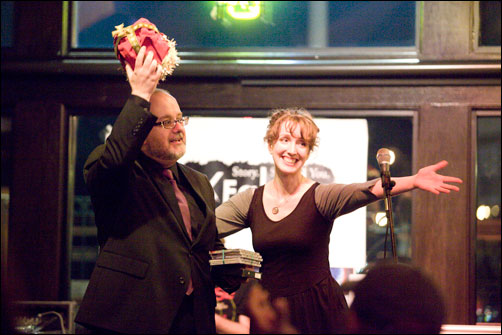 Storytellers have just one chance left to compete for an All-Star storytelling slot on April 13 at Stonefly Brewing Company in Riverwest, just a few blocks from where Ex Fabula held its first event at the Art Bar. The theme of Ex Fabula 6, the final event of the first season of Ex Fabula, will be “Stranger in a Strange Land”.

,The brilliant guys at High Frequency Media captured our event and will be sharing another short film version of a story or two with us soon. We can’t wait to see what they’ll create from the night.

Selected stories from the March event, graciously recorded by WMSE’s Ryan Schleicher, will be posted here in the upcoming weeks. Drew’s winning story will be aired on WMSE – check back soon for more information!

Thank you to Adam Ryan Morris for the lovely photography of the evening! More photos coming soon on our Facebook page!