A fool’s paradise? Last week, Ex Fabula returned to Hot Water Wherehouse for our final storyslam of Season 5 on the theme of “Fool Proof”. Megan McGee served as emcee for this evening full of hilarious and heartwarming tales and shared some memorable audience UltraShorts in between story tellers.

Missed out? Want to relive the best night of your week? Here’s the scoop.

You kids and your pranks! In high school, Dave Hendrickson and friends drummed up what they thought was a fool proof flag pole gag to gain popularity & rile up the authorities. Christyn could have told her driving companion that the farting noises in the car were from the remote control fart machine and NOT her…but it made the trip to Colorado more fun! Bible camp mischief maker Isral DeBruih might have thought twice about his water balloon ambushes on fellow campers and counselors had he known it would lead to his name on “The Coldest Night” wall.

Speaking of cold nights, a bed and breakfast from hell was the wrench in Shruti Gopinathan’s seemingly fool proof honeymoon plan in Italy. 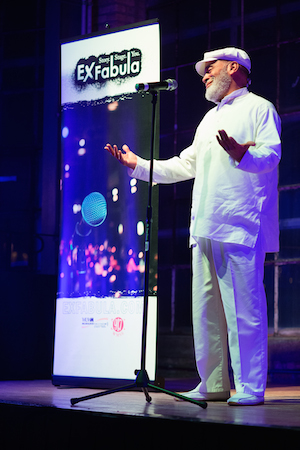 The things we do for love. Virginia Pothier’s fool proof plan to get her firefighter crush’s attention in high school ended up working a little TOO well. A diet plan involving overexposure on pillow cases full of sugar was the unexpectedly fool proof way that Mark Wein saved his marriage. What won’t save love, however, is trying to be perfect – a ride down a steep hill was a catalyst for Leah Leone’s heart-breaking relationship wake-up call.

As we waited for the votes to be tallied, the lesson from a heartwarming and emotional story from guest teller Teju the Storyteller was that simply dancing and laughing with children can make any bad day better. I think we could all use that reminder!

Congratulations to our audience favorite story teller and final winner of a spot in the All Stars lineup *drum roll please*: Virginia Pothier! A big round of thanks to all of our fool hardy storytellers for giving us another memorable round of stories, including special thanks to guest Teju the Storyteller. We are continually grateful for our volunteers and sponsors, whose time, talents, and generosity make Ex Fabula possible and to Hot Water/Wherehouse for being such an awesome venue and partner this season. Last but not least, thanks a bunch to Megan McGee, the fabulous emcee!

Our May 9th All-Stars lineup is set, and tickets are ON SALE NOW! Get ’em before their gone – don’t miss a chance to kick off another Milwaukee weekend with the cream of the Ex Fabula crop.

Fight the “Fear of Missing Out”. Stay connected with Ex Fabula: On the web / On Twitter / On Facebook / We’re even on iTunes!