Mother Nature, did you forget that it’s spring? While we continue to navigate the fluctuating weather patterns, locals packed into the Times Cinema on Tuesday evening for true, personal stories relating to the theme of Forgotten’. Emcees Leah Delaney & Tiffany Miller welcomed a bevy of new and familiar faces to the StorySlam, sharing announcements and smiles.

Moving can be such a hassle. First time storyteller Angela McManaman described the weight of dealing with forgotten memories & uncovering secrets in her family’s new home.  Peter May stepped to the microphone, taking the crowd back to Honduras circa 1986 with his cameraman tale of kind of being lost, Tina Turner soundtracks and ‘organic’ street signs. Rounding out the first leg of the evening, Jayo Haselhoef revealed to the crowd the origins of a rather unique friendship some people would prefer she forget.

After a brief intermission, some news and a few UltraShorts, the crowd was treated to three first time storytellers! Sometimes you just have to remember to be kind to yourself; Erin Clapper decided to celebrate a small personal victory by treating herself to a special outing that included a bonus two-for-one. We all have things we’d like to forget…. or do we? Ryan Webster shared a wild out of town narrative that included dancing whipped cream & the celebration of squashed fun times. Fun times can lead to bittersweet moments though. Tony Anderson’s story of non-traditional roles, childhood fun & familial moments highlight how we end up forgetting things we hold dear.

One final intermission and a few more announcements, the crowd settled in for the evening’s final three storytellers. Tracy Hrojnoha’s roller coaster narrative of death, secrets, sickness & life stunned the audience; proving that she most definitely has grace on her side. We forget keys, deodorant and…. people? Kimberly Marie struggled with her tale about remembering and supporting someone who was so easily forgotten amongst their peers. Forgotten people, forgotten moments in time. Deserae Constantineau closed out the final portion of the evening with her story about covering for siblings, family secrets and loss of innocence.

As the votes were being tallied, the crowd tuned into the words of guest storyteller Anne Basting. She shared her narrative on the importance of listening to the stories we are told & also how to enjoy silence for it is telling as well.

After the guest teller, congratulations were in order for Audience Favorite…. Ryan Webster!! 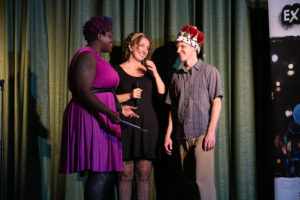 Thanks to all of the storytellers and our lovely emcees. Thanks to the Times Cinema & season sponsor Transfer Pizzeria + Café. Special thanks to our members and volunteers!!! We’ll see you at ALL STARS!!!