Matthew Konkle opened the evening by recounting a social experiment in social awkwardness (i.e. the first date of Junior High). After a silent amble around South Ridge Mall, fretting incessantly over the post-date kiss, Matthew eventually learned that it’s easier to start with kiss and work backward to the first date.

For Ann Ziegler, a budding office romance came out into the open one Halloween at Mad Planet. After a night of cutting the rug, the new co-worker asked her out. If not for her strict policy on never-dating-co-workers, who knows what may have happened? She found the answer six months later when they crossed paths at a bar. This time, he was dressed as a she. 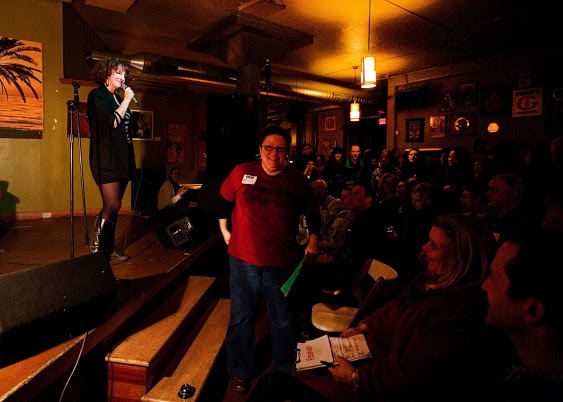 Becca Segal’s mother wants nothing more than some nice Jewish grandkids. Tricky spot for Becca, since she hasn’t yet found a nice Jewish husband. Lured by the promise of some heirloom earrings, she agreed to find love on J-Date. A series of rotten dates with some real schmuks followed and she has since resolved to find love organically.

Dana Lovrek shared the tale of her marriage and divorce. On the playground, in 1st grade. She chased a boy all fall, and come spring he finally, reluctantly proposed. They eloped to the kickball fields and, after holding hands for a bit, became husband and wife. A whirlwind honeymoon took them as far as the basketball courts, as wide as foursquare courts, but culminated in their untimely divorce just before the end of recess. 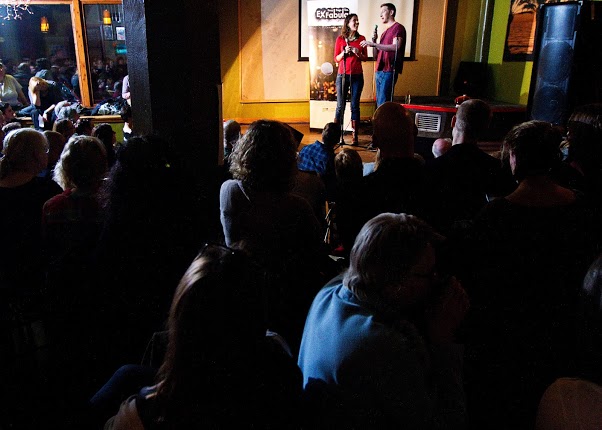 Ex Fabula volunteer Leah Leone and beau Ken Converse recounted a harrowing date to the hellish cesspit known as “Chicago” that would have spelled the end for a couple with less mettle and moxie. Their third date destination: the Shedd Aquarium. Their actual destination: a murderous ticket queue in 105° heat. Rolling brown-outs closed the aquarium early, so the couple took shelter across the road in the Field Museum. More lines were followed by more lines and a free water fountain quickly became the highlight of the day. But of course, their ordeal would not be complete without missing the last train to Milwaukee. Remarkably, they remain happily together to this day.

Audience favorite Linda Cieslik regaled the Stonefly crowd with a tale of soup, codeine, and an undying love of Gertrude Stein. While waiting for fellow members of the local “Love Stinks” group on Valentine’s day, Linda tried the $2 champagne special with a bowl soup. An allergic reaction followed, but the Tylenol with codeine in her purse saved the day. Shenanigans ensued. 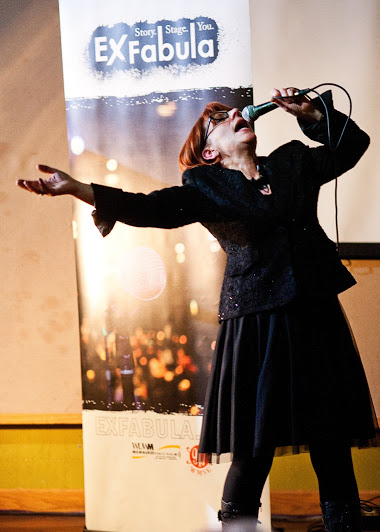 Andrew Larsen shared a story of a time he realized he was on a blind date midway through the night. After he discovered he was gay, he remained close friends with his former girlfriend. She invited him out to the movies with her hot new boyfriend… and some other guy for Andrew. Andrew’s blind date picked fights with the other couple, and it slowly became apparent that he had the hots for the only straight guy at the table. Luckily, Andrew saved the day by distracting the group with every light bulb and knock-knock joke he knew. He hasn’t been on a blind date since.

In Gaylord, MI, there is a yoga ranch. The evening’s next storyteller, Nathan Royster, was invited to said yoga ranch by his friend’s father, who is best described as a “White Bill Cosby living in a garbage can next to Oscar the Grouch.” It took some time to settle upon a date to leave, and after series of false starts plagued their departure they couldn’t even make it past Manitowoc.

The evening rounded out with Mark Steidl tale of an unexpected date. In his youth, Mark was living the dream in the exciting and highly lucrative convenience store industry. With his red polyester smock and limitless access to comic books and day-old doughnuts, he had it all going on. One night a knife wielding assailant demanded the contents of the safe, but Mark recognized the burglar through the stocking mask. He convinced her to ditch the robbery and the next day he took her to Six Flags to cheer her up.

It was quite a show and we couldn’t have done it without the support of WUWM, WMSE, and YELP! Join us next month as we head south to beautiful Bayview. Club Garibaldi will host the next story slam on Tuesday, March 12. The theme of the evening… “Green!”