Milwaukeeans deserve dedicated, innovative people in their corner, pushing beyond the barriers that keep so many of us segregated.

I grew up on Milwaukee’s Northside in Carver (Lapham) Park Homes, often referred to as “the nice projects,” before my mom moved me and my siblings to the Silver Spring neighborhood. I’d just completed 8th grade and was gearing up for my first day at Reagan. A new house and new school meant a lot of change for my overtly anxious 14-year-old self.

Degrassi, Napoleon Dynamite, and the tumultuous stories of my older siblings had attempted to prepare me for high school, yet I was a big old ball of nerves on the first day. Reagan is in the Town of Lake neighborhood. The trek to the Southside was completely unfamiliar. However, my grand studies taught me that if I could make it through the bus ride, I might just be alright.

I remember the sky being dark, the air being too cool for my capri pants. After a few minutes on the bus stop, I couldn’t tell if I was shaking from fear or the breeze on my ankles.

A young man, who’d been waiting on the stop with me, called out, “you must be a freshman.” When I asked what gave it away, he giggled and responded, “yo’ ashy ankles. Everybody knows it’s cold waiting for the flyer.” And he was right, but I had to protest.

“So, what’s the excuse for yo’ crusty lips,” I retorted. We both laughed before swapping lotion and Carmex. He and I were soon sitting on the bus together, kicking jokes back and forth like we’d known each other for years. And just like that, I’d made my first friend.

By daybreak, the route-19-flyer was buzzing with scholars collected from Northside, Eastside, and Southside Milwaukee neighborhoods. The busy myriad of students, catching up on each other’s lives, comparing 1st-day-outfits, complaining about class schedules, resembled a “Where’s Waldo” puzzle. As each of us bustled with the excitement of a new school year, I could feel the ball of nerves unravel. 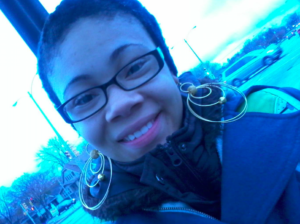 Before I knew it, the dreaded commute was over. Everyone had exited the bus and filed into the building to win the race against the homeroom bell. My awkward-anxious-ashy-freshman-self had made it through (mostly) unscathed. From there, I was ready to tackle the hallways, coarse load, and more!

In an hour and a half, I found that I could make connections with real people. I found that there are folks all over the city feeling what I was feeling, afraid to go outside of their comfort zone (or zip code). I found that each of us were very different and so much alike at the same time. By pushing past my own discomfort with the unfamiliar, I’ve learned that the barriers that separate segregated Milwaukee can be minimized. A lesson I continue to carry with me now at 23-years-old.

Challenging ourselves to foster community can be daunting. Start small. Be the lotion to my Carmex.

About the Author: Alea McHatten