Recap: Grown-up Show and Tell at The Milwaukee Art Museum

Recap: Grown-up Show and Tell at The Milwaukee Art Museum 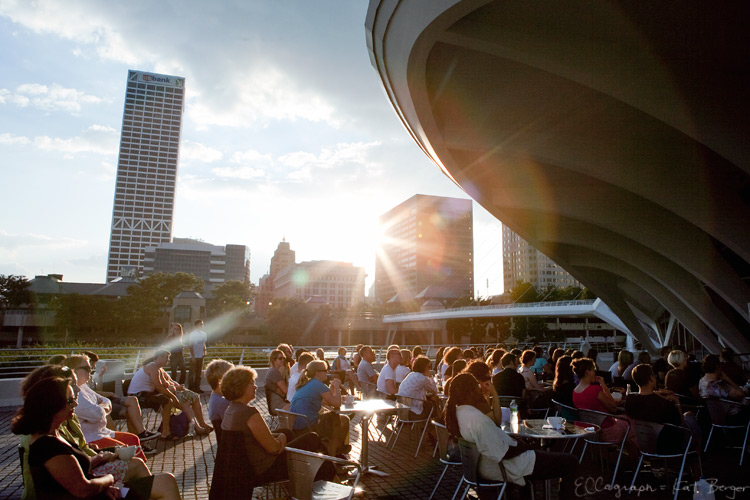 Just for the people of the “beautiful, f*#*ed up fabric of Milwaukee” Ex Fabula conjured up the loveliest of summer evenings in the loveliest of intimate settings for the latest story telling event on August 5th. The audience was treated to a Grown Up Show & Tell at the fieldtrip Mecca, Milwaukee Art Museum terrace.

Dana Lovrek kicked off the stories by holding up her keys and telling how they made her “bad day even worse.” Dan Neiderloh’s bag of cassette tapes stood as evidence to his tween obsession with recording his own voice and anything else the mic could capture. “Move over Catwoman, there’s a new kid in town:” his name is Randall Anderson and he has a bullwhip with which he amazes crowds at the Renaissance Fair and Ex Fabula. The lakefront hasn’t witnessed as many ooohs and ahhhs from an audience since the Big Bang.

Jacqueline Luettgen held our hearts in her hand along with a business card that pays tribute to her cousin and best friend who was recently lost in the Iraq War. A night of Ex Fabula stories is nothing if not varied and the evening took a turn toward the funny and uncomfortable when Mike Brenner brought a wad of toilet paper to show and tell a story that could be titled “Home Depot: Clean Up on Isle 8.”

Playing off of Jacqueline’s story, Mike began, “There is god. There is the holy spirit. And there’s shitting your pants at Home Depot.”

Ex Fabula first timer Lisa Gatewood offered up a box of letters to delve into the correspondence she’s had with her former school guidance counselor for the last 15 years. As he crossed the lines of a “professional relationship” and crossed into a life of addiction and jail sentences, she learned more about herself than one does from traditional visits to the guidance counselor. Mike Heider brought along artifacts of his career as a news cameraman since he couldn’t find the letter of apology from the chief of Milwaukee Police Department to illustrate tales of being assaulted on the job.

In addition to a gorgeous setting, the Milwaukee Art Museum offered up its Director of Visitor Experience to the audience. Bambi Grajer has worn every day for the last 11 years a sterling bracelet made by a Navajo silversmith. Every day it reminds her of the conscious choices she has made about what her life would be.

When Adam Carr took the mic, he took a minute to comment on the “fabric of the city” before starting his story and finishing his apple, core and all. He told of a philosophy professor who ate apples the same way and was his “Knight in Shining Armor” on several occasions. The sun finally behind the skyline, Amy Losi made her way to the front on crutches. They are making her life difficult, but they help her remember it was the sixth time she fell this year that put her on them.