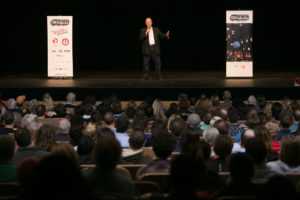 Did you have any clue what you wanted to be when you grew up? Elaine Maly had a reasonable and what seemed solid idea. The evening’s first ALL STAR storyteller kept the crowd in stitches with her tale about wanting to lead a more religious lifestyle and a blasphemous game changing moment that halted it all. Sometimes we have to leave when we really want to stay. Ryan Webster‘s account of teaching  & living abroad had him a little mixed up in the beginning. His abrupt departure left others puzzled but he expressed much gratitude for such a life changing experience. Now, you can’t have a game changing theme without at least one football moment.  Wrapping up the first half of the season finale was David Fowler with a tale that included a progressive football coaching father, hair hanging out of helmets and inclusion. 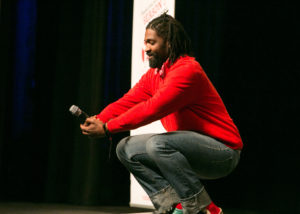 I got you! Guest storyteller Kima Hamilton lends a helping hand.

After a brief intermission, some Season Eight teasers from the emcees and a few more UltraShorts, the farewell to Season Seven continued. Labels can be dangerous and serve as catalysts for potential game changers. Molly Snyder‘s narrative about the perfect neighborhood and the accidental discovery of a friend’s secret almost lead to a loss of friendship and funds. How many pets is too many? For Eric Nelson‘s family there are never enough. His hilarious tale about finding the right pet had elements of Goldilock’s, rebound pet relationships & curious questions about crucifixion. No worries, there was definitely a happy ending. Have you ever hugged a tortilla ? Jeanette Arellano, the final ALL STAR storyteller of the evening, dished on what it was like to be a transplant in a new city, finding members of her tribe and how food is most definitely a game changer & has the ability to unite people of all backgrounds. No one likes to be the token.

As the votes were being combed over, guest storyteller Kima Hamilton shared his fatherly comedic tale of camping, family and unconventional outhouses. Water, water everywhere indeed. Lessons were definitely learned that day. So, who walked away with the title? Congratulations were in order for…Jeanette Arellano !!! Kudos to you for being the Season Seven Audience Favorite! Woo hoo!!

The evening started and ended the same way: with community & laughter. Many, many thanks to the storyteller for gracing the stage once again and to the audience for their support. A special thanks to all volunteers, members and sponsors for making this such a game changing Season Seven! See you in September!!

All photos courtesy of Art Montes.