Everyone remembers their first time, whether it’s their first time driving a car or drinking alcohol. With good beer and food from Lakefront Brewery, we huddled inside on a cold winter night in Milwaukee to tell some stories of first times. 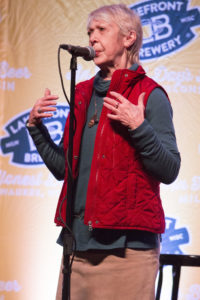 Have you ever had a drunken night with your friends at the beach and found yourself in a jail cell?  Richard Kerhin sure does.  After a night of shenanigans he thought a truck was following him in his car, turns out it was an undercover cop.  He spent the night in a jail cell and was proud to say he hasn’t been arrested since.

On his first tour on the west coast, Peter Woods somehow ended up in a welding shack in Washington state.  Appalled his band was being charged for food, he took two special brownies from the venue.  He later realized that they were indeed very ‘special’ brownies.

First timer, Carol Hale, experienced shrooms for the first time nine years ago at the Center Street block party.  Strangers came to her rescue and took her where she needed to go – a nearby bar, The Uptowner. 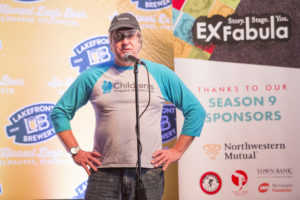 Mark told a story about hearing the first of many words including “chemo” “blood cancer” “histiocytosis” – his daughter developed blood cancer at a young age and through a very emotional performance, Mark explained how The Children’s Hospital helped his daughter recover. 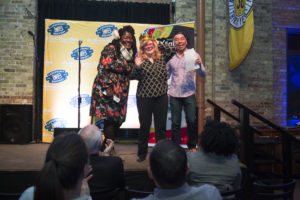 First timer and winner of the night, Patricia McNamee Rosenberg told the story of her first date after her husband passed away 30 years before.  Her purse was stolen and later found in the car of the mayor’s wife.  It turned out okay because she is still with the man she went on the date with to this day.

The first time Lauren Smith lied to her daughter was a memorable one.  Her daughter was an inquisitive child who would ask difficult questions about death and life that made Lauren reflective the idea of mortality.  Especially when she was watching her own mother age.

Sandy Brusin was a substitute teacher in Chicago. On her first day, she went across town in her most professional clothes.  A tall seventh grader asked Brusin if it was her first day.  When she asked, ‘how can you tell?’ he turned his back and shouted to the other seventh graders, ‘class is dismissed.” 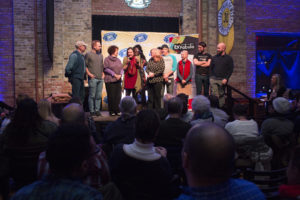 One night stands are awkward, especially the first one.  Another first timer teller, Jacob Yager, shared a story of what started as a casual night out with his friends drinking wine from a box ending with him falling asleep on his own bathroom floor.

Yet another first timer, Peter Dubish knew his passion was to work in Central America as a forester.  His passion quickly became reality.  He taught about wildlife and forestry while he was in Honduras. Ultimately, he learned more from the locals in the end.

We want to thank everyone who came out to the StorySlam “First Time”.  Take a look at our upcoming events on the tickets page and maybe you can be the next first timer storyteller at a StorySlam!