Our 14th Season kicked off Sept. 21st at Arts @ Large! The theme was Good Trouble and our nine storytellers share stories of wayward adventures, picket line experiences, and even medical emergencies, but all of our storytellers came away from their trouble with new knowledge and a great story. 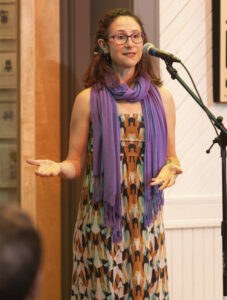 Sarah Beth Nelson started off the night with a story about her 4th grade self being terrified for getting in trouble for passing a very important note. “I believe in ghosts, too” it said. She was looking to connect with her classmates who were discussing their paranormal beliefs when it was intercepted by her teacher. Instead of getting in trouble, Sarah Beth’s teacher told her “Things have happened in my life that I can’t explain” and became the first adult to validate Sarah Beth’s belief in the unknown. This story showed how sometimes trouble can lead to connection. 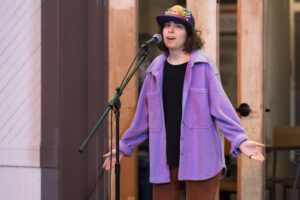 Anja Notanja Sieger’s story also led to a unique connection, except this time it was with an eccentric artist with skeletons in her closet! Anja and an older friend were drinking Kombucha on the street and feeling very cool when a woman came up and started sharing her thoughts on the city, horoscopes, and even their Kombucha drinking. She invites them to her house to see her artwork and Anja and their friend let curiosity get the better of them. Anja describes the strangest piece of art as an assemblage of skeletons in her closet representing all of the abortions she has had in her lifetime. 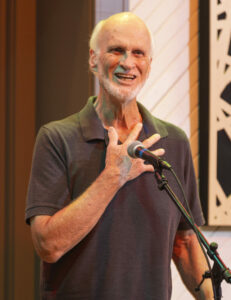 Jerry Muelver was our first new storyteller of the night. What started as a story of the labor movement and childhood memories of being on the picket line with his mother turned into a lesson about life before the invention of the breast pump! Jerry’s mother was breast-feeding his little siblings at the time but out on the picket line she needed some way to express her milk, so she enlisted help from Jerry. One day another woman needed the same help and Jerry’s mom volunteered him to help her as well – soon enough he was the picket line breast pump!

After Jerry we had an exciting amount of new storytellers get on stage. Matthias Jonas told a powerful story about his German grandfather befriending a French prisoner during World War II. Maxwell Depratt’s comedy of errors included dog pee, a search in the woods, and an accidental stabbing. Paul Whitehouse shared a traumatic experience of being wrongly arrested and Eric Graff reminded us of the importance of speaking truth to power, no matter if that is in the form of asking too many questions in a religious school or standing up against your own abuse. 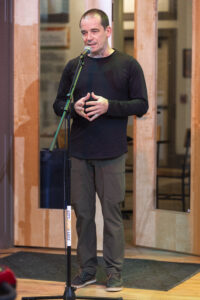 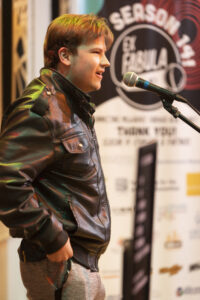 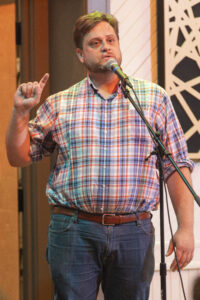 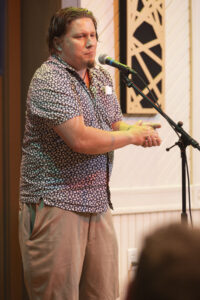 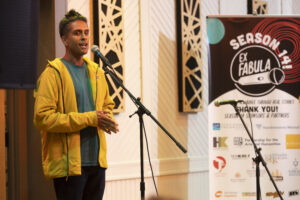 Kiran Vedula brought a lot of laughter into the room during his story about his dad’s attempted rescue of someone who wasn’t in any danger. As his dad was leaving the house, he saw a girl down the street get grabbed and thrown into the back of a car. “Hey!” he said as he took off running towards the girl just before hearing the words “Cut!” from the director of the film they must have been shooting. Kiran’s father’s heroic efforts were not needed in that moment, but Kiran says, “he will always be MY hero.”

Another newbie, Greg Marshall, took us on a journey with him as he went from dancing and singing in a hip-hop musical, to fighting for his life in a matter of days. Because of swelling in his spine, he started losing his ability to read, see, move his legs, and even form complete sentences. Greg says he “literally didn’t have anything to stand on,” but somehow he still fought. Through that experience he gained a new appreciation for life and a new understanding of the importance of his voice and story. Greg’s moving story ended up winning him fan favorite of the evening and he will be joining us at ALL STARS at the end of the season! 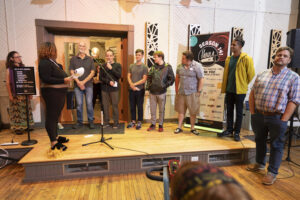 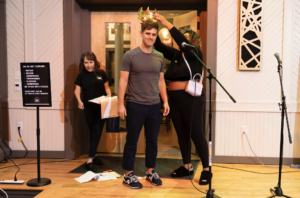 We want to thank Arts@Large for providing an amazing space for us to come together and share stories. We are also incredibly grateful for our skillful emcees, Michaela Lacy and Deserae Constantineau, who created a welcoming and energetic atmosphere and made sure that we cheered each storyteller “all the way to the stage!” And a final thank you to everyone who came out to listen to and support our storytellers. It was so nice to see everyone in person and we are looking forward to seeing you at the next StorySlam “Like Magic” on Oct 13th!