There’s nothing quite like the end of yet another successful Ex Fabula season. And unlike the theme of this year’s ALL STAR StorySlam hosted at historic Turner Hall this past Thursday night, we can honestly say there are no signs of Unfinished Business regarding our goals for season 8. Because the goal is simple: to bring people together to tell true, personal stories. And that’s exactly what we did.

Have you ever watched an ad for something and thought ‘Darn, I had that idea first!’?  Not only had our first teller Peter May experienced that many times over but he has a 502-page list brimming with ideas to show for it. Nothing ventured, nothing gained, right? Sometimes though, everything ventured is everything gained.

Sandy Brusin’s account of opening her home and heart to a child in need couldn’t have come at a better time. He needed a safe haven from a dangerous home country. She and her husband thought they were unable to conceive again. When it was safe enough to return to his family, Sandy was devastated until many years later when they were able to express gratitude for the roles they had played in each other’s lives. 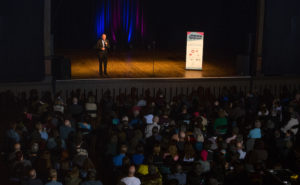 Oftentimes, unfinished business is not really unfinished at all; it just takes on a different form. The first time Tom Matthews tried his hand at music, he knew there was something there. One heavy metal/rap band and brush with fame later, though, Tom discovered that you don’t need to be a rock star to have someone to listen. He found a built-in captive audience in the classroom as a fourth-grade teacher.

“Some of the most moving, awe-inspiring masterpieces are the ones unfinished. And I think that’s true for human beings as well.” Heather Swanson left the audience breathless as she recounted the painful memory of losing a friend in a car accident. Rather than dwelling on what ifs, though, Heather lives her life by loving and trying, knowing her friend is by her side to remind her that one life unfinished is another life fulfilled.

Between stories, emcee Leah Delaney and a few Ex Fabula guests took to the stage to share some UltraShorts. A personal favorite and something we can all relate to: “A bag of chips never goes unfinished.”

After intermission, Jody Hirsh was up with a story of worst case scenarios while traveling across the globe. Moral of the story? If Jody can make it to his final destination while lugging a dreidel-shaped piñata, musical instrument, and suitcase, so can you. 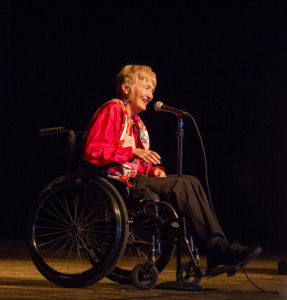 Continuing our farewell to season 8, Barbara Leigh graced the stage with an ode to storytelling, performing, and a refreshing perspective on life when it takes a detour. Barbara could have easily become disheartened following an accident that left her legs paralyzed but instead, she reminded the audience how much unfinished business she has left to do.

There couldn’t be a better example of unfinished business than the current state of American politics. Jennifer Hoepner’s narrative of the political and generational differences she shares with her mother, as well as her efforts to change her mother’s mindset left us all relating the story to people in our own lives.

Last but certainly not least among the ALL STAR storytellers was Joel Dresang, who shared how he resolved some unfinished business by reconnecting with a former teacher who had inspired him to go on to be a writer. 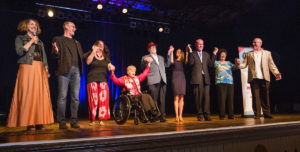 The ALL STARS take a bow.

So, who can call themselves the Ex Fabula ALL STAR and Season 8 audience favorite? Heather Swanson!! We know your friend would be proud!

As always, the night was a reminder of the power of storytelling, community, and coming together. There’s always some unfinished business to tend to when it comes to building community dialogue, though, and it’s one we will not stop working on!! On that note, see you in September. 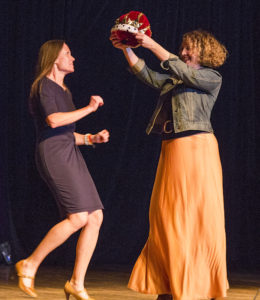 Thanks as well to our ALL STARS event sponsors, While You Were Out Pet Sitting and Halling & Cayo S.C.

And of course, thank you to the members, volunteers, storytellers and attendees for being part of an incredible evening.