Wednesday, March 9th, Ex Fabula was back in action for our fourth competitive StorySlam of season 13. Stories of travel quickly filled the space as volunteers and staff set the stage at one of our favorite spots, Sugar Maple. Sugar Maple’s cozy atmosphere coupled with the vibrant emcee, Neil Qusba, made room for an evening of laughter, empathy, and community. 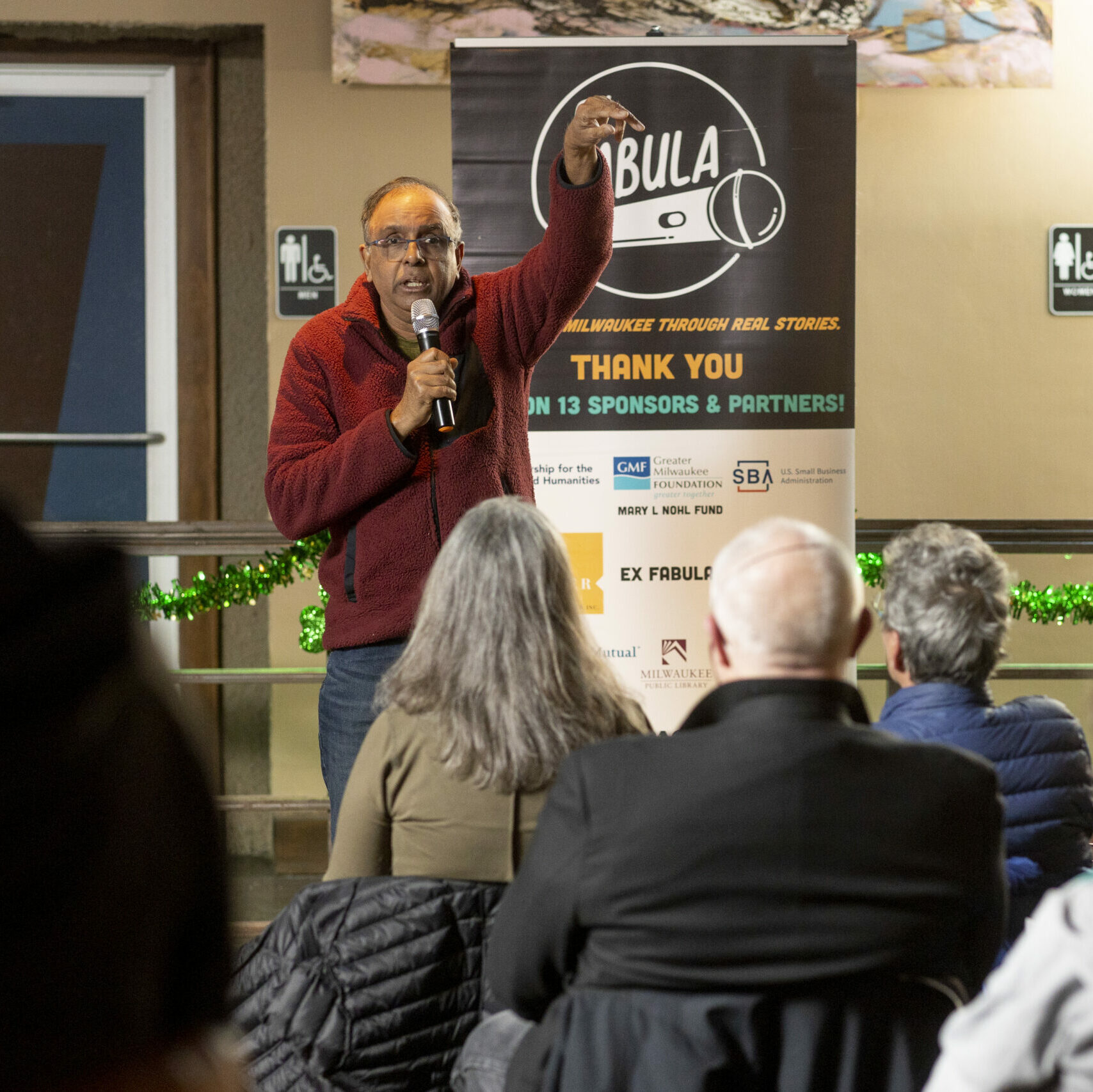 The first name pulled from the hat was Murali Verdula’s. Murali recalls traversing Italy with his wife, Usha, who are very good planners… usually. The couple begins their journey across the country in a rented, European style car when they quickly realize they don’t know how to shift the car into reverse. Pushing the car out of several parking spots and 500 euros in parking tickets later, a kind stranger shows them the ”special knob”. Murali describes a lovely day in the sun sightseeing, though their travel troubles don’t end there.
Headed back to their hotel in Sienna, Murali and Usha find themselves being sent in circles by GPS. Each time they seemed to have arrived at their destination, they simply can’t get through the entrance. Turns out, after a certain hour, the city closes its gates and cannot be entered without a pass. A different kind stranger spotted the couple and gave them a lift to their hotel. Murali says “she was an angel!”

Jessica Betts was next out of the hat. Jess’ sister took a Spanish class in middle school that traveled to Costa Rica. Jess was able to go on the trip even though she didn’t speak any Spanish. The class traveled via horseback, though Jess had never ridden a horse before. Despite the odds, the ride went smoothly, until Jess’ horse decided to start going the wrong way. Luckily, she wasn’t alone and was helped back onto the path. The up-mountain ride continued with Jess praying she’d survive. When it came time to go down the mountain, Jess swears her life flashed before her eyes as her horse went galloping at top speed! Thankfully, there were no Jessica’s (or horses) harmed in this story. 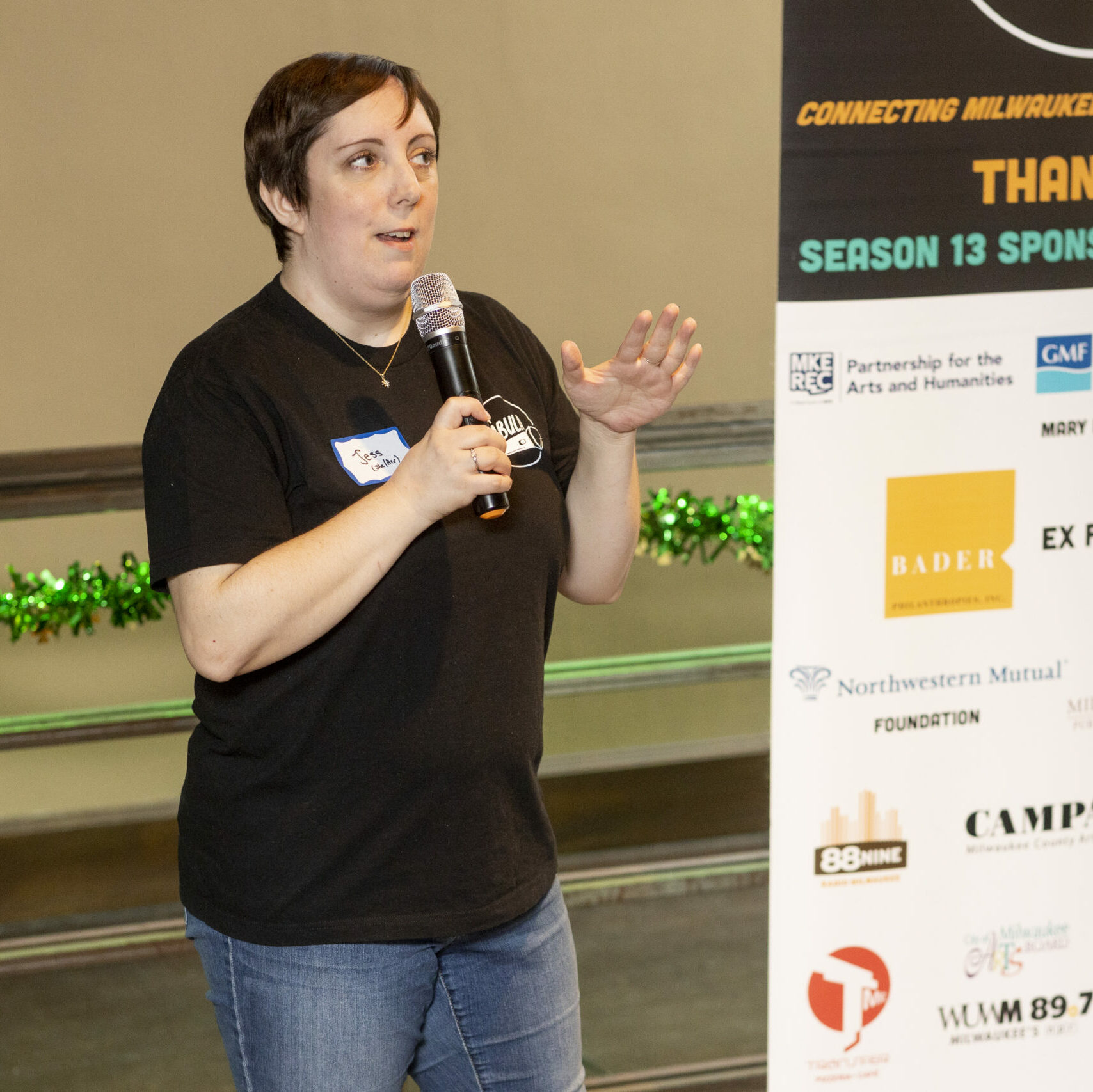 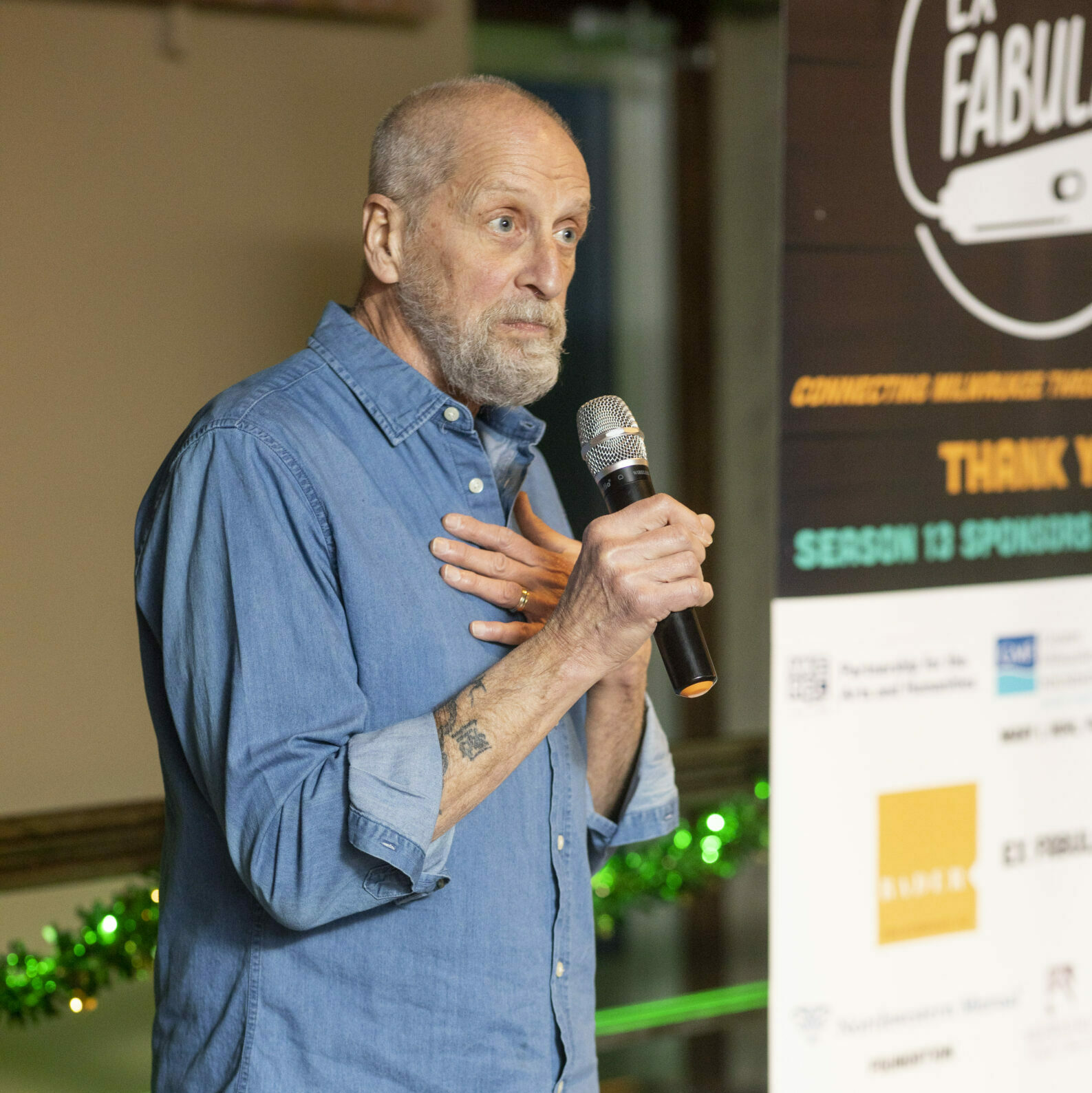 Mark Weinberg went on his own up-hill journey as he traveled the rocky, beaten down path to a monastery in Greece. The narrow, cliff-side road accompanied by a staggering height kept Mark and his wife clutching their metaphorical pearls. Along the way, they run into a sweet couple that offers to take their picture. Headed to their next stop, Mark and his wife run into the couple again and offer them a ride back to their car. They take on the path 2 more times before reaching their next destination. After a delicious (and large) meal, Mark and his wife are leaving a restaurant when they are flagged down by the same couple from earlier that day. As luck would have it, the couple had accidentally left their camera behind in the backseat of Mark’s car.

40 years ago, Rebecca Cullen-Dietmeyer took a different kind of road trip with a handful of close friends. To celebrate leap year, or “the day that doesn’t exist”, Rebecca and her friends took some acid and decide to drive from their hometown in Illinois to Wisconsin. The snow was all fun and games until they decided to “go find summer.” So, they hop in the car and hit the highway. Before they know it, they’ve driven all night and it’s slowly getting warmer. The group sheds their winter gear and rolls down the windows as they enter Tennessee. Morning creeps in and so does their hunger. A cute little diner and a charming waitress welcome them to eat to their fill and play hacky sack in the sun. They’d found summer! but still had to drive back to Illinois. 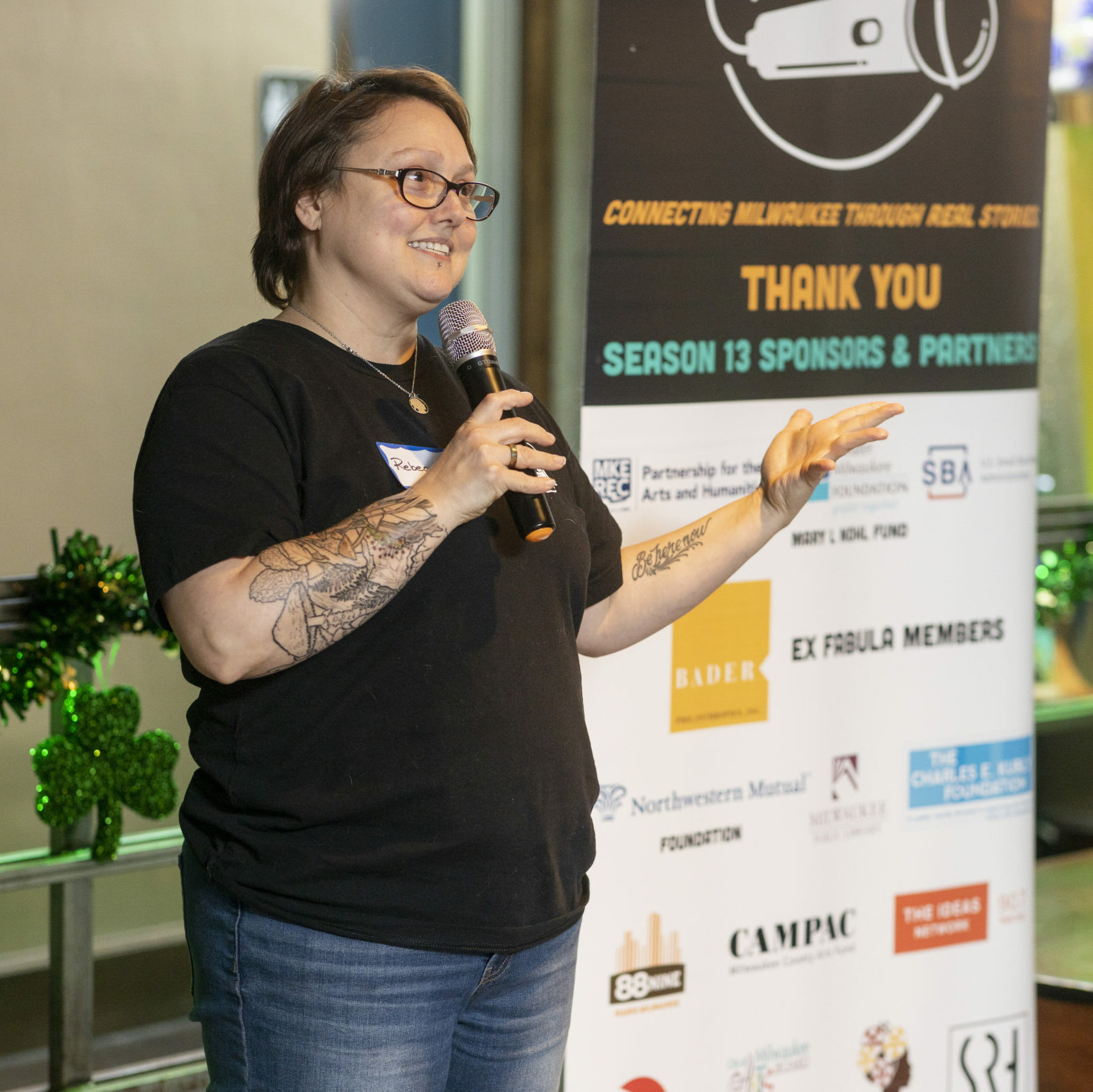 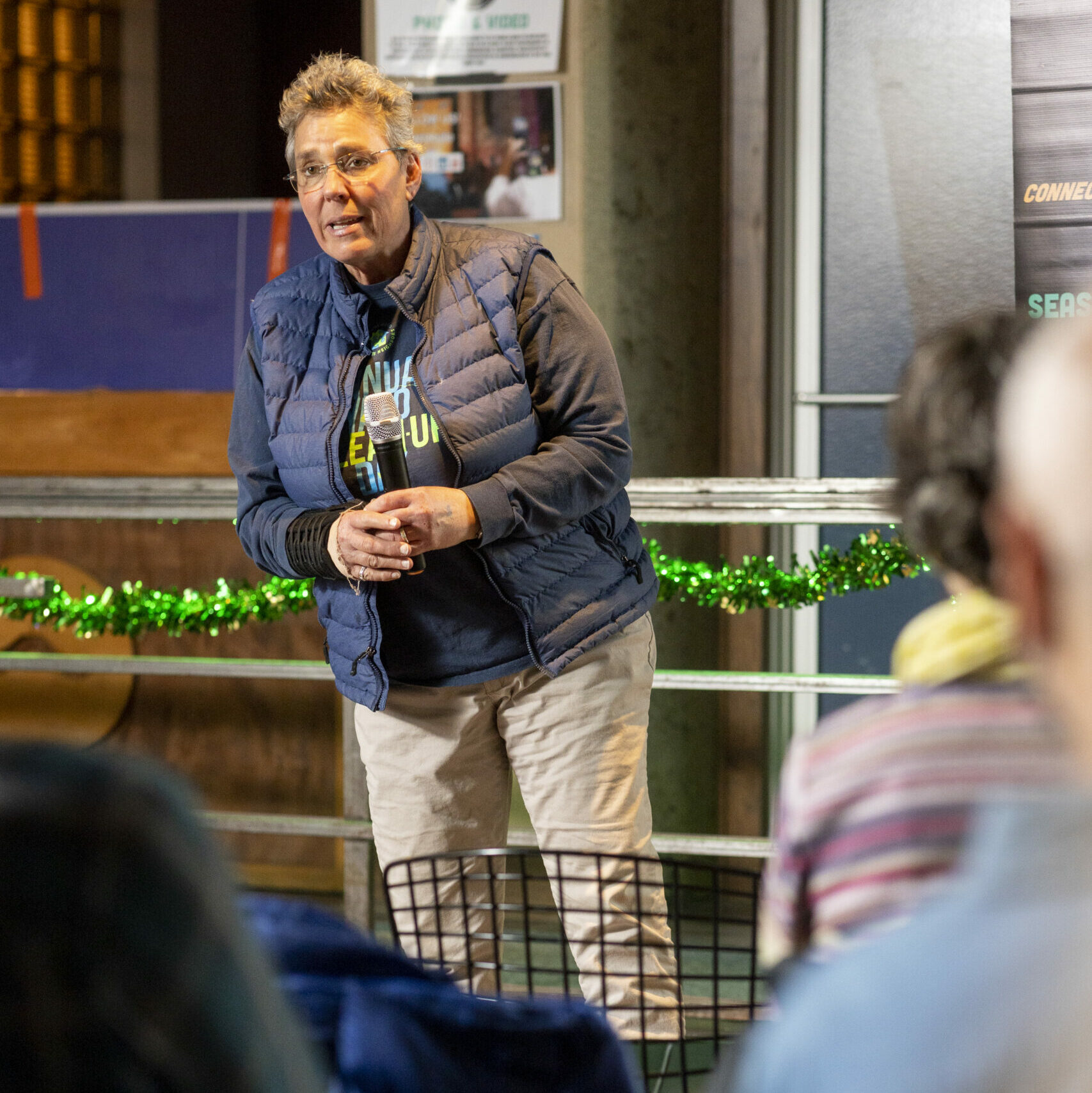 First-time teller with Ex Fabula, India McCanse would often be asked “have you been to India?” and she’d respond “not yet, but someday.” When the opportunity presented itself, she jumped at it! Just 2 things to do: book the flight and pack a bag for her 2-week stay. When India called the airline the travel agent couldn’t tell if her name was India or if she was traveling to India, but both were true!
India finally lands in Mumbai and her baggage is lost and money is stolen. All hope is not lost, however, when India runs into a gentleman who helps her get some clothes from a shop for cheap. Over her stay, she serves children and families affected by poverty. The experience deepened her passion for community.

Michaela Lacy didn’t have to travel far – a trip to the dealership with her boyfriend resulted in the purchase of a used, manual gear shift vehicle. Michaela asked her boyfriend if he had experience driving stick well before he paid for the car. He assured her of his skill, got the keys, and they were off. 1st gear, easy. 2nd gear, no problem. The clutch, not so much. The pair are already on the highway when the car begins to sputter and jump. Michaela screams, her boyfriend yells, all in fear causing them to pull over and call a family member for a ride home. The next day, a trip to the dealership resulted in her boyfriend returning the car. 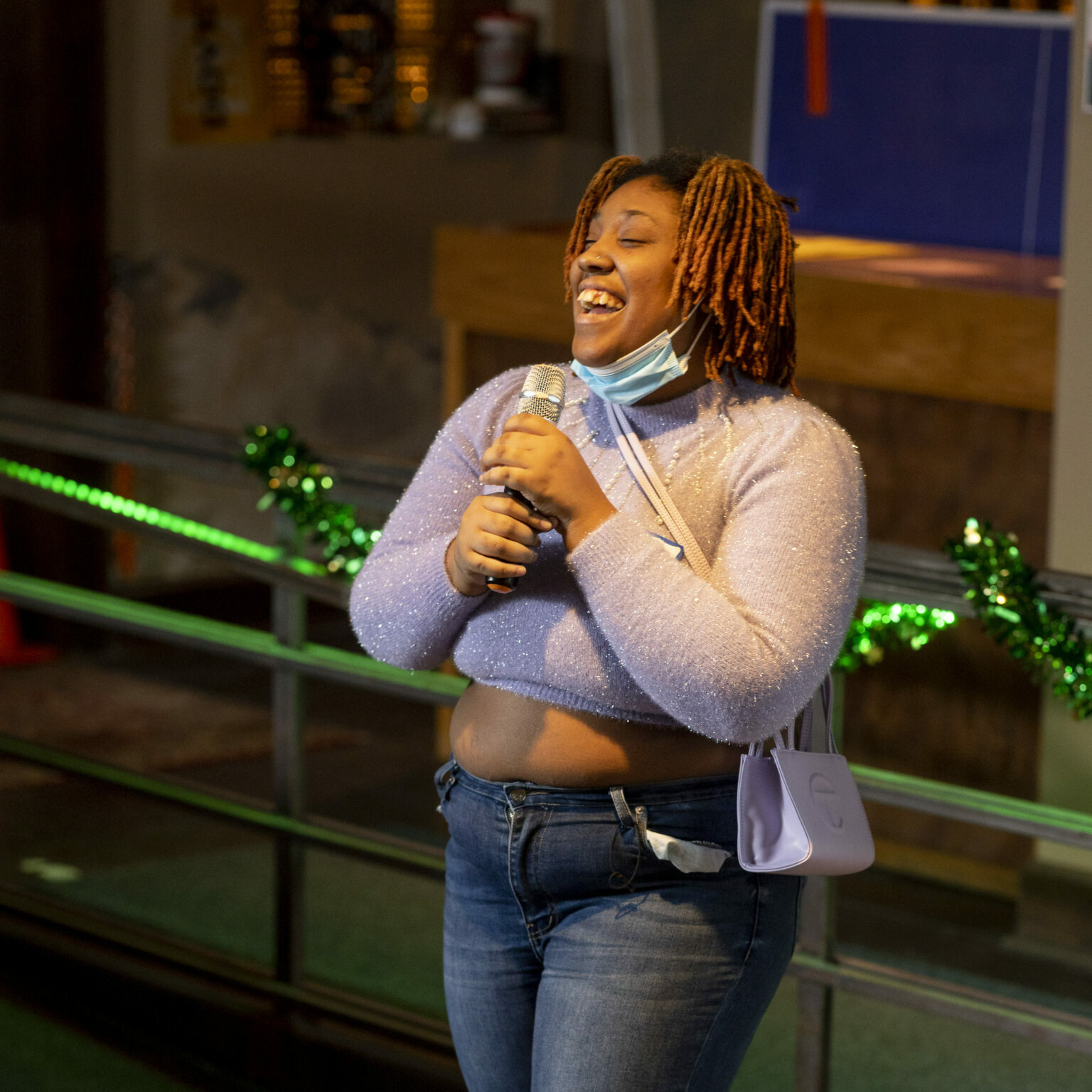 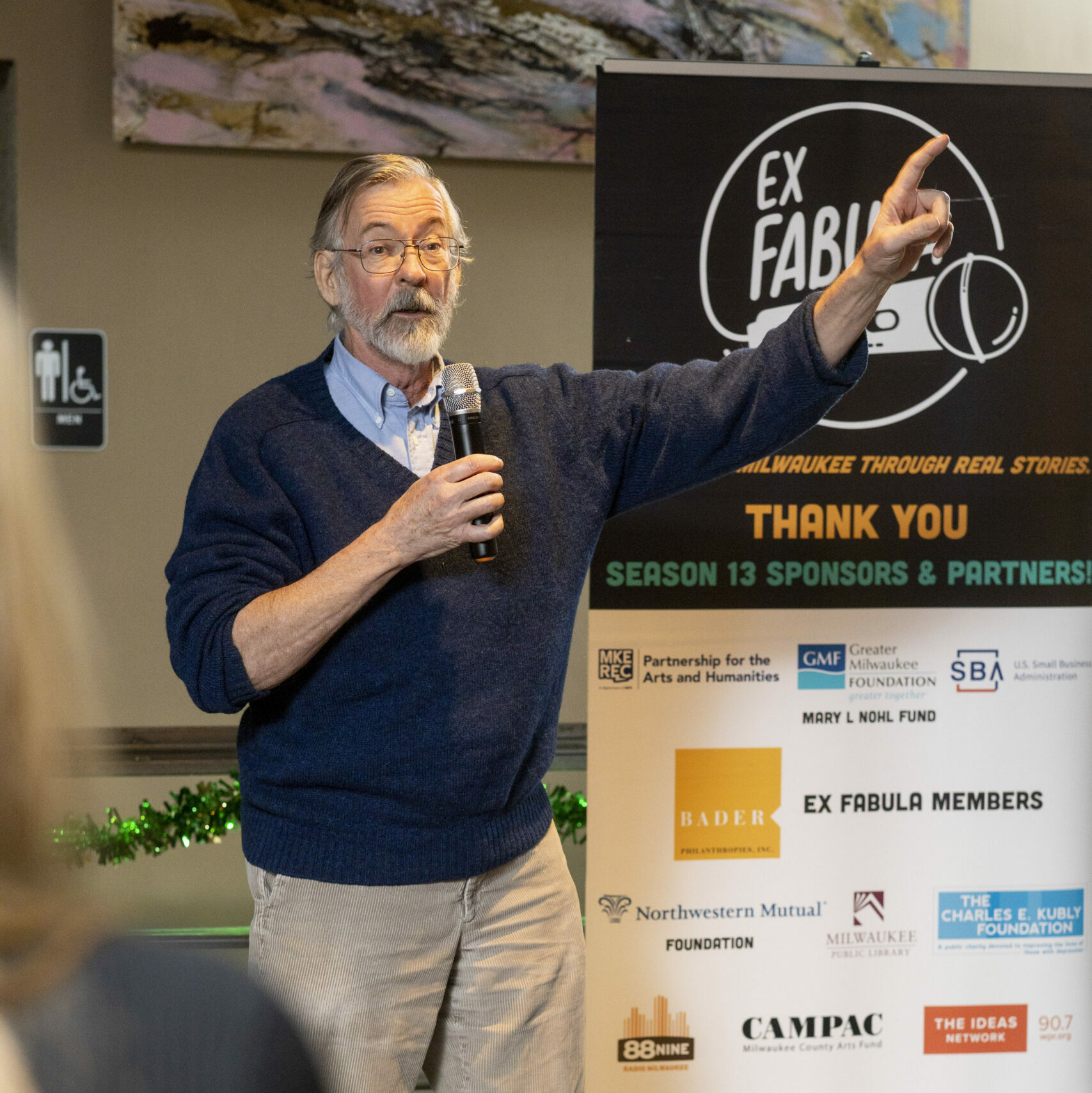 15 years ago, Kevin McGee began packing for a 6-month stay in Northern Germany where he’d be teaching. He and his wife love to travel, so they planned a few stops on the way to their final destination. Kevin knew that they’d end up doing some shopping, so they also planned to take 2 empty bags with them. When it was time to head home, those 2 bags were quickly filled with the items Kevin’s wife had grown attached to. The weight limit on the suitcases, however, did not agree with her sentiment. The solution she came up with was to ditch some old underwear for the ceramic baking dishes. The real solution was Kevin’s knee strategically tilting the bag on the airport’s scale.

Peter May spent a lot of time in cars during his time as a travel videographer. Of his travel group, he was often the designated driver. Before a trip to Scotland Pete decided to internalize the European style of driving, driving on the left-hand side of the road. This worked out really well for Pete but scared his teammate in the passenger seat when she woke up thinking she was in the driver’s seat.
When Pete returned to the US, he went to lunch with his travel group. When they left the restaurant, Pete realized internalizing the driving style may have worked a little too well. 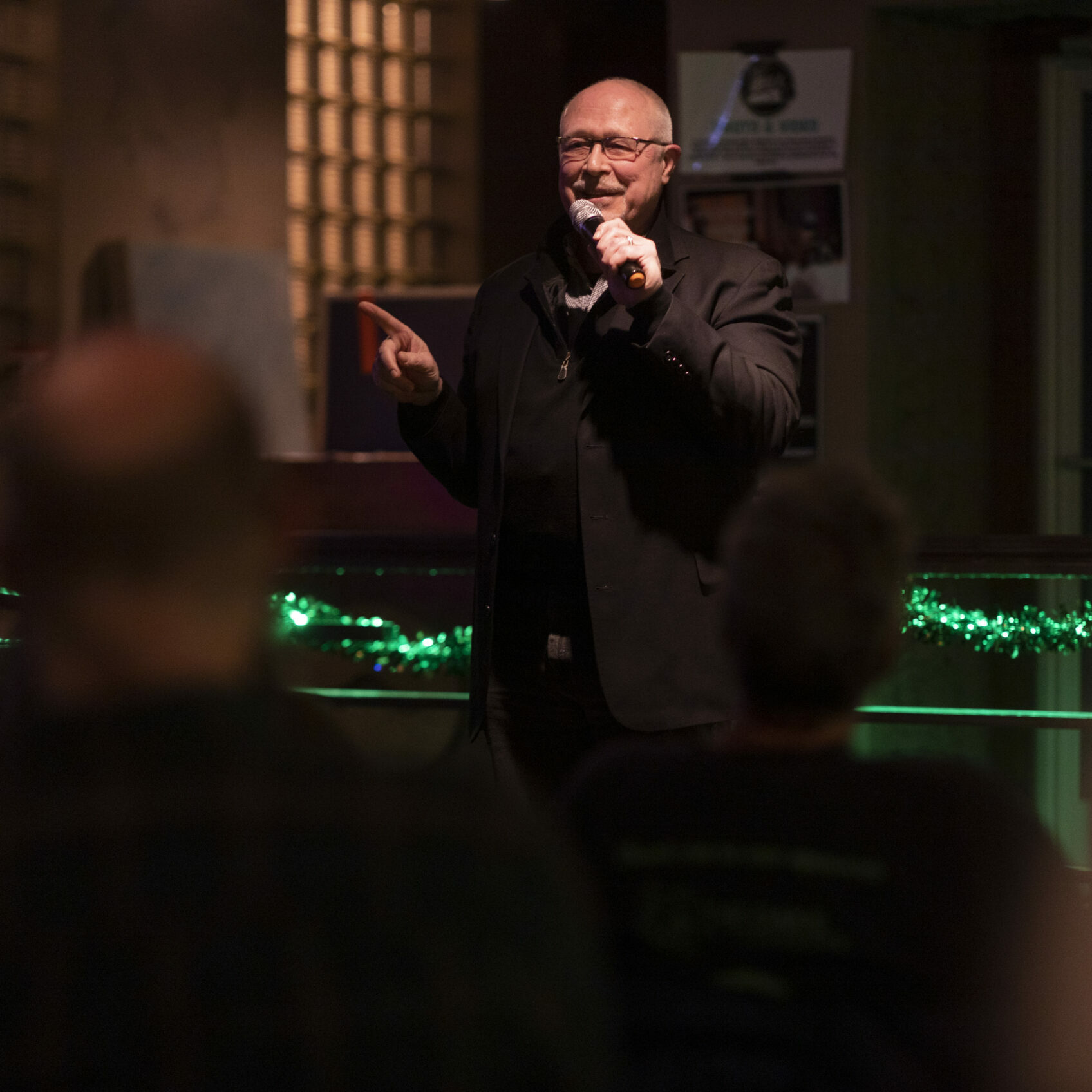 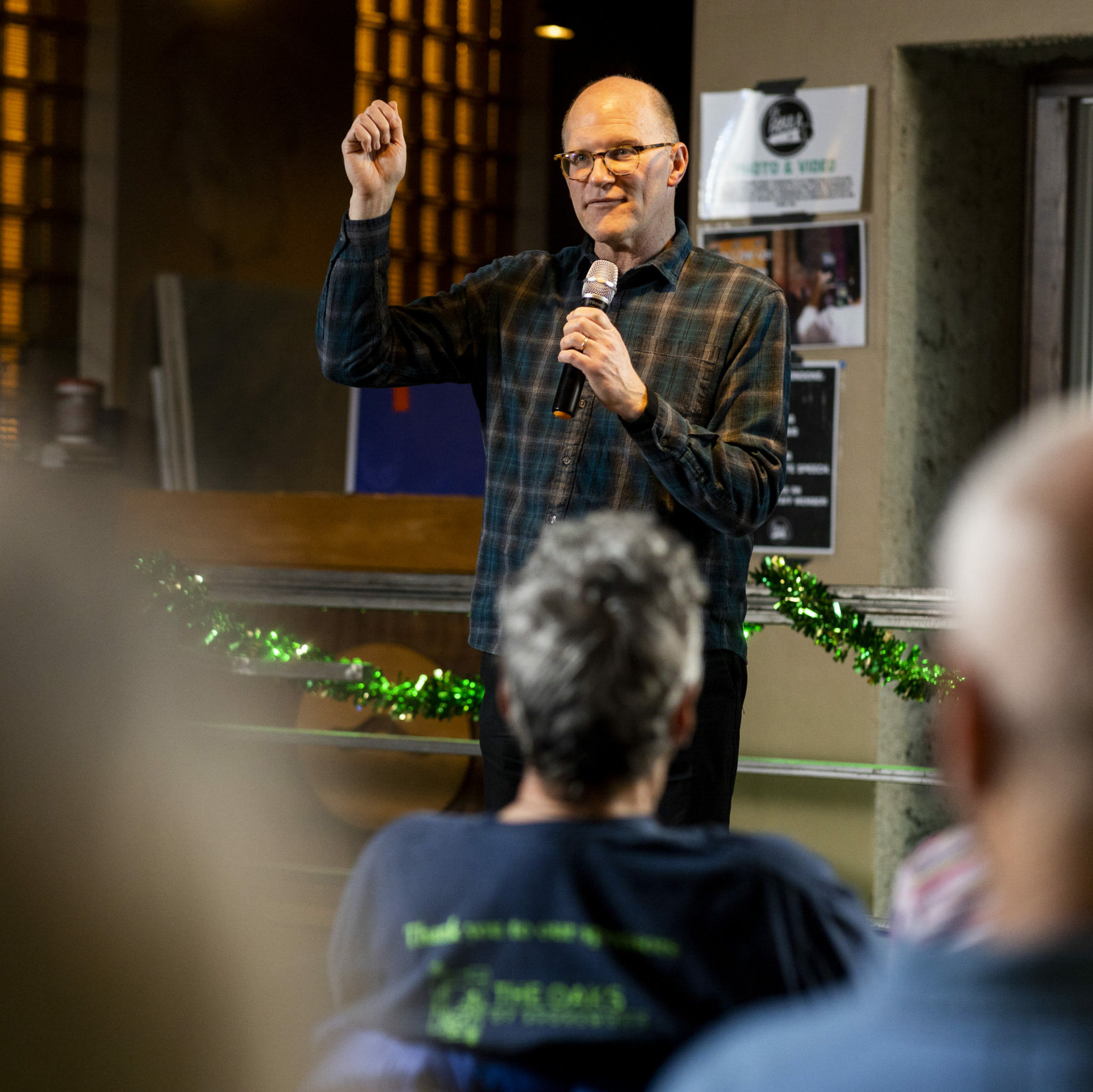 The last name to be pulled from the hat belonged to Joel Dresang. 40 years ago, Joel was planning to move to South Africa for graduate school. He was young and restless, experiencing wanderlust, and wanted nothing to hold him back. 35 years later, Joel is in the airport, finally on his way to SA when he receives a call: his brother had been taken to the hospital. Joel notifies his other siblings and proceeds to board his flight.

Joel goes on to experience much of the beauty in S.A. – beautiful scenery, grazing elephants, and more. A few days before his trip is to end, he gets another call: his brother’s health is failing. Joe does his best to catch an earlier return flight but is met with many delays. After 20+ hours of travel, with a heavy heart, he returns to the US just in time to share his love and gratitude with his brother.

The audience was sure to show their gratitude for each storyteller, their favorites of the night being Joel and Mark*.

Thank you, Educators Credit Union, for sponsoring StorySlam: Travel. Thank you, Sugar Maple, for sharing space with us.

*Unfortunately, Joel will not be available for ALL STARS on May 12th. Mark received the second-highest number of votes and will join us for ALL STARS. 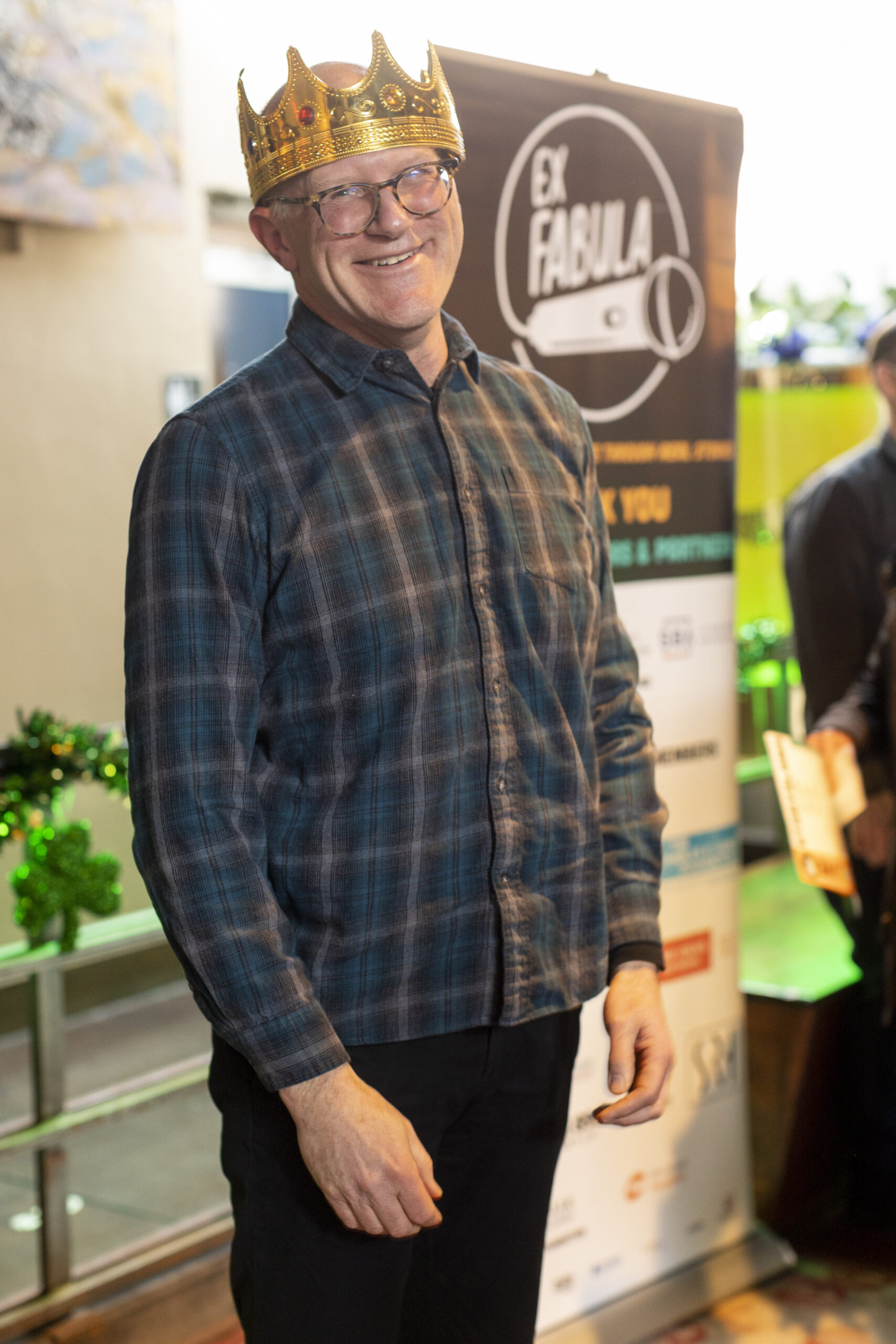 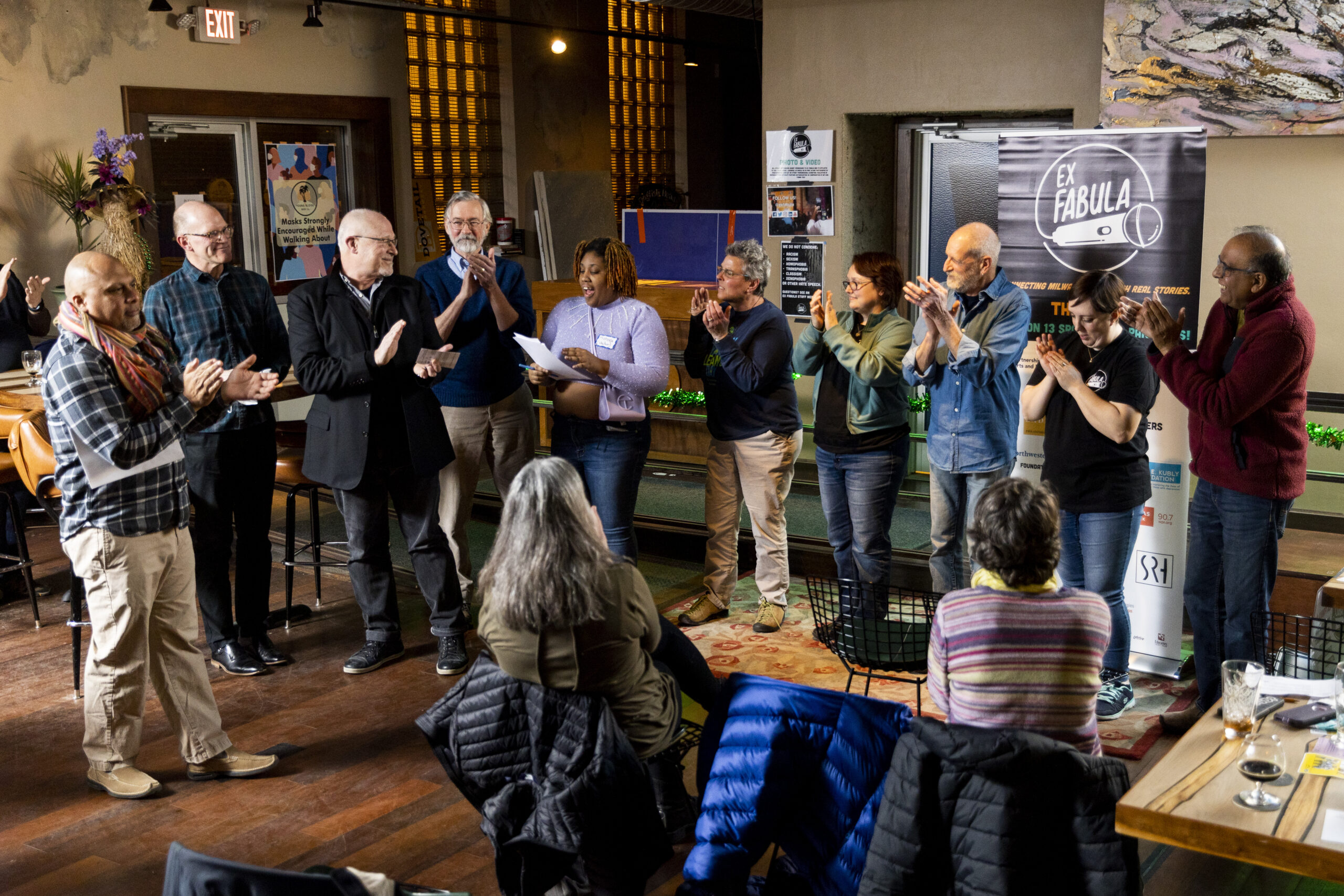 About the Author: Alea McHatten