Skip to content
Home/Recaps/Risking It Sneak Peek
Previous Next

What does “Risking It” look like? Do those stories change between baby boomers, millennials and Generation Z? We’ve been exploring those questions through a partnership with the South Milwaukee Performing Arts Center that will culminate in a curated StorySlam this Friday November 17. 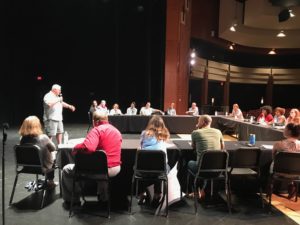 The project included several workshops – one for community members at SMPAC, and a series of 3 workshops for a South Milwaukee High School Creative Writing Class. The stories told ranged from missed opportunities, to finding true love and even making new friends in high school. After the workshops, we reached out to several participants to see if they were interested in sharing the story at the curated Slam, and we matched each teller up with a storytelling coach to practice.

For example, Nolan Eggleston participated in the workshop at South Milwaukee High School, where he shared a story about his decision to take an Art class, hoping to get an easy A. He worked with Nelson López and will be telling his story onstage, so come find out how the story ends! 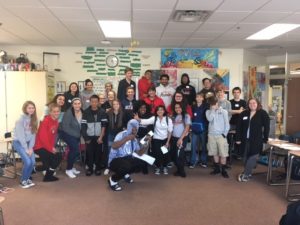 Chris McIntyre Perceptions, Pam Grandy, Christina Oster and Gordon Leech all participated in the public workshop. Chris, who has previously performed at SMPAC as part of “Broken Genius” , calls the SMPAC a “gem” and said he appreciated not only telling his story in the workshop but also the chance to listen to the other tellers. When working with a coach, Pam found it really helpful to identify the details and emotions in her story. Christina’s favorite parts of the workshop were learning how to organize her stories – and the Almond Kringle.

Rounding out the cast of six storytellers is Peter May, a longtime Ex Fabula volunteer and frequent storyteller who has previously graced the SMPAC stage as part of Milwaukeappella , an annual evening of a cappella music featuring professional A Cappella groups and SMPAC high school students.