Havenwoods neighbors share the promise and heartache of a distinct community

Havenwoods neighbors partnered with Ex Fabula to tell their stories of righting wrongs and growing businesses, of old shopping trips and newfound love, as part of an event that highlighted a community that stands out beyond Milwaukee.

“People in this part of Milwaukee have figured out how to create communities and businesses and workplaces and parks that reach across boundaries of race, ethnicity and class in ways other parts of the city and nation have not figured out,” said Dr. Aims McGuinness, a historian from University of Wisconsin-Milwaukee, during the event.

The storytelling about the far-northwest neighborhood was part of an annual community banquet, hosted by long-time area business, Direct Supply, and run by the Havenwoods Economic Development Corporation (HEDC). 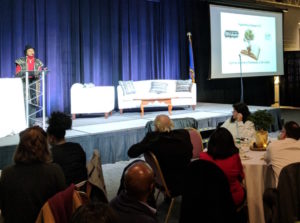 Ex Fabula storytelling pro and Havenwoods artist Blanche Brown (pictured at left) served as emcee for the stories, on which she guided locals. McGuinness interspersed his historical perspective on origins of the neighborhood and what continues to make it so unique.

The stories were the culmination of a banquet that featured an invocation and meal; awards for block watch leaders, community garden green thumbs and business paragons; and updates on commercial strips and façade upkeep.

Debi Banks remembered cheering with her daughter when the nearby Kmart closed for good. Decades before, a flashing “blue light special” at the diminished big-box store set into motion a confrontation on prejudice and pain over “this roll of film with pictures of my first granddaughter.”

Jim Bartos, a member of the HEDC, led with an African proverb: “If you want to go fast, go alone. If you want to go far, go together.” Bartos said it related to an employment grant that has taken root in Havenwoods. What started as a group effort on an employee placement program PowerPoint turned into state funding for jobs in the neighborhood.

“The synchronicity was almost too much to believe,” Bartos said. 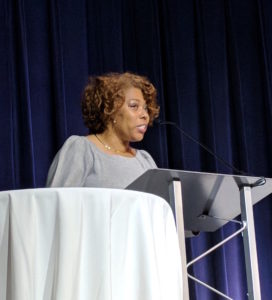 Toni Edwards (pictured at right) told about the swings in her home life over the past 15 years in Havenwoods. Where buying her first home with her husband began from a place of heartache, Edwards stuck it out, with her son, and eventually met another caring and not-bad-looking father unexpectedly at a nightclub.

Claudette Holloway has lived in Havenwoods for more than 40 years and made more than a few hello’s as she sauntered from her seat to the stage. In telling of her love of shopping, especially at the local Ben Franklin, Holloway took a detour on the houses and families she’d come across.

“Everyone back in the day kept their yards so beautiful. The whole neighborhood was beautification,” Holloway said.

The Ben Franklin store is gone – replaced by a Family Dollar – but Holloway said what made up the essence of the store really was the people inside, many of whom remain with their families in the neighborhood. 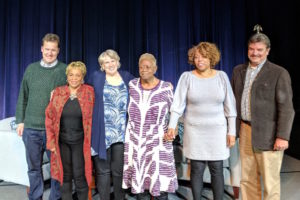 Finally, Vera Ford, recalled the early start of the JOBS Corps program in the area. With a nod to “The Golden Girls,” Ford invited the crowd to “picture it, Havenwoods” back in its formal beginnings in the ‘50s and ‘60s. Between her JOBS Corps roots over the decades and her long-standing friendships, Ford exclaimed, “I am Havenwoods.”

Brown also shared numerous ultra shorts from the about 125 crowd members. In them, the community remembered when horses ran on the polo grounds, where people gathered to watch Fourth of July fireworks and “how the trees grew” over the decades.