Why Those Surveys Matter

Over the last 10 months I’ve been asked a lot about what I do with Ex Fabula. When I answer “data analysis,” I’ve often gotten a look saying “what does data analysis have to do with storytelling?”

It’s a fair question, and its answer strikes at the heart of what Ex Fabula is all about. Everyone knows about the stories that are told on the Ex Fabula stage, but much of our time is actually spent thinking about how to include stories currently missing from the stage.

One project I worked on at Ex Fabula was what we informally called the “MEN Project.” Slam data from the last two years showed that men were noticeably underrepresented in the audience. The “MEN Project” investigated why this was the case, and if there was anything that we could do about it.

Why We Care About Men

Some of you may be asking “why do we care about representing men at all?” After all, men are generally overrepresented in much of society, so why should we go out of our way to include them in another public space?

If I’m being honest, I had a very similar response when I read the job description. Purposeful inclusion of male narratives is not usually included in the engagement strategies of most nonprofits in Milwaukee.

But as I got more familiar with Ex Fabula, I realized why it matters. As a man, I carry a lot of privilege in American society, but one privilege I don’t have is the ability to be vulnerable in public. When men take the Ex Fabula stage, we rarely hear about their high school varsity status or professional victories. Instead, we listen as they process their fears, anxieties, and the love they have for their family, friends, and neighbors. If we as men are serious about interrogating toxic masculinity and how it harms us and those around us, the Ex Fabula stage has proven to be an excellent place to start, or continue, that interrogation.

Our Programming is Not the Problem

So with a firm grasp on the project’s “why,” I started investigating. The potential reasons for Ex Fabula’s trouble with attracting men are infinite but fit under two broad categories: programming vs. engagement. Are men not showing up because there’s something about our StorySlams that doesn’t appeal to them, or is our engagement strategy failing in some way?

To determine whether programming was the problem, I looked at past survey data from Seasons 8 and 9. Here are the surveys this data came from: 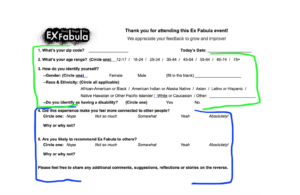 There are two basic categories, demographic information (green) and feedback (blue). Using a statistical method called “regression”, you can isolate each of those demographic characteristics and see if any of them correspond to better or worse feedback. This can help identify any causal relationships between demographic characteristics and how much someone enjoyed the show. In this case, I wanted to use it to see if identifying as male had any effect on how someone rated our program, regardless of their age, race/ethnicity, disability identification, or zip code.

I found no evidence that men felt more or less connected to others at Slams or were more or less likely to recommend Ex Fabula compared to nonmen. In other words, men did not rate Ex Fabula better or worse than nonmen.

This means that our problem was not with programming, but with engagement: men who came to Slams liked Ex Fabula, but not enough men were coming in the door.

This was huge, as it indicated that there was not something fundamentally wrong with what Ex Fabula does on stage. However, it did mean that there was something wrong with our engagement strategy. To brainstorm ideas, I interviewed 11 men who are currently, or were previously, involved with Ex Fabula. I wanted to pinpoint how they heard about Ex Fabula, what convinced them to get involved, and why they did or did not keep coming.

The group’s reasons for getting involved with Ex Fabula were numerous, but one theme was consistent. Men (and likely people in general) tended to get engaged through word of mouth. So to better engage Milwaukee’s men next season, we will deliberately hold more workshops with men’s groups in the city. From there, good word about Ex Fabula can spread organically.

Why this Project Matters

Luckily, this strategy fits well into what we already do nearly every day. While many know Ex Fabula for our public Slams, most of our time is spent organizing private storytelling workshops. In the past year, our partners have included Journey House, the Milwaukee Muslim Women’s Coalition, and the Housing Authority. These workshops hold space for participants to find, craft, and tell their personal stories.

Next year, we’ll be adding another partner to the list. Partly because of the “MEN Project,” we’ll be partnering with Fathers Making Progress, a support group by and for fathers of color. We’ll be holding space to explore the trials and triumphs of fatherhood through personal storytelling.

These workshops with Fathers Making Progress are why we collect data at shows. We don’t collect it just to tell ourselves we’re doing a good job. We use it to guide long-term investigations like the “MEN Project”, and design projects that end up having a real-world impact right here in Milwaukee.

I know answering surveys at our shows can seem unnecessary. But these survey responses really do contribute to real-world impact. By this time next year, the dads at Fathers Making Progress can tell you all about it.