A dedicated Ex Fabula volunteer, Sue Blaustein, attended the curated StorySlam “Refugees” at Haggerty Art Museum on November 2nd.  The coveted art museum on Marquette University’s campus was filled to the brim with audience members and Ex Fabula volunteers.  Here’s what Sue had to report on the special event.

The huge charcoal drawings of “The Refugee Trilogy” exhibit at Marquette’s Haggerty Museum of Art made a haunting backdrop for the “Refugee Stories” story slam. The exhibition booklet tells us that wars (and associated catastrophes) force 34,000 people a day around the globe to leave their homes. 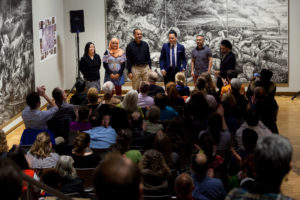 Tellers received a standing ovation from the audience at Haggerty Museum

Five storytellers helped the overflow crowd understand what that can mean. They stood before Milwaukee listeners and conveyed, face to face, what Twitter posts and Facebook declarations can’t communicate.

Two Hmong immigrants ­shared the way the war in Vietnam and its aftermath shaped their worlds. Chia Xiong told us he cherishes the traditions his family brought to the United States; and, as an LGBT person, cherishes the freedom to be himself that he’s found in his life here.

Dr. Chia Vang – a historian – recalled the time in her early childhood when she and her family had to remain, at all times, “ready to leave”. Once, on the move to safer territory, her family was captured and transported in a truck with strong exhaust fumes. She related that even after she was resettled in a Minnesota city, the scent of exhaust on city buses triggered that feeling of fear.

After the September 11, 2001 acts of terror on American soil, our nation initiated an era of continuous wars in the Middle East and Afghanistan. Three tellers – a father and daughter forced to flee Iraq – and an artist (with family of one generation affected by the Turkish genocide of Armenians, and in this generation by the conflict in Syria), exposed the costs of these wars on a personal and family level. 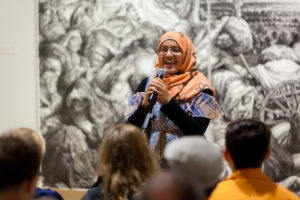 So – what are “safety” and “freedom”? Chia Xiong beamed with optimism and thanked his father for bringing the family here to take advantage of opportunity. 17-year-old Sana Shakir talked about overcoming some adjustment hurdles, and her plans to study biochemistry.

At this event, we celebrated and learned from refugees who’ve settled with us. Yet, we know that fear is driving support for policies that will slam the doors shut on victims of war. On our soil, fear and hate of LGBT people and of Muslims could compromise the safety that Chia’s and Sana’s parents sought for their children.

What are we going to do?