Guest blogger Tamara Burkett attended the curated “On The Road” StorySlam on October 19th at the Milwaukee Historical Society. The event was presented by the Milwaukee Journal Sentinel and Wilde Subaru.

Here’s her take on the night.  You can read more of Tamara’s thoughts on her blog, which has a whole section of travel stories to check out as well!

I was invited to StorySlam hosted by Ex Fabula last week and let me tell you, it was amazing!  Spending an evening listening to story tellers did not sound like a fun time initially, but since I never been and was invited, I thought why not.  You only live once right?  Anyway, the StorySlam was held at the Milwaukee County Historical Society. You know, the same place Johnny Depp filmed Public Enemy. 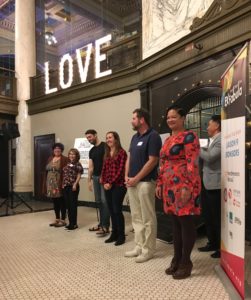 Although a Milwaukee native, I’ve never been inside and yes, it’s gorgeous!  The interior has beautiful marble columns, elegant chandeliers, and a gigantic vault on the north end that commanded my attention as I entered the building.

Needless to say the architecture provided a dramatic back drop to the story telling.  Did I mention they had a wet bar too? (Not to sound like a lush, but I was beyond thrilled).

Back to the story….for those who don’t know what a StorySlam is, it’s like poetry slam but with stories. The one I attended included six storytellers. Eight stories were performed relating to the theme “On The Road”.  Audience members also had a chance to have their story read by the MCs by submitting short stories or “UltraShorts”.  Feeling a little bashful, I wrote an UltraShort about the time I rode in a rogue shopping cart in my youth. To my surprise, it was read toward the end of the evening!

There were many highlights to the evening that made for a magical experience.  All of the stories had humor and were entertaining. I learned about snipe hunting, the Driftless Area of Wisconsin, and secrets of RV life.  My favorite story was about a lady who spent a weekend with friends in a cabin up north. I could imagine being at the cabin as she painted a vivid picture of what took place. The story was hilarious and retelling it wouldn’t do it justice. Lets just say the story involved alcohol, bloody hand prints, and a sleep walker. 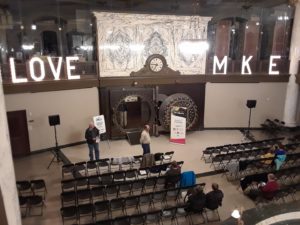 Ex Fabula offered an eclectic group of story tellers who each had a unique style of storytelling. It was raw, and real, and liberating to connect with individuals on a personal level.  What a great evening filled with personal stories, excitement, and laughter!

If you want to flex your storytelling muscles and connect with people, I strongly suggest attending an Ex Fabula event. The next StorySlam is coming up soon so check out their website.

Ex Fabula is a nonprofit that’s committed to strengthening community bonds through the art of storytelling. They host monthly StorySlams in different venues around the city.