What Could Go Wrong Recap

On October 17 we welcomed the Ex Fabula crew back for Season 9’s opening StorySlam: What Could Go Wrong? Before the stories got underway at Hot Water Wherehouse, two groups participated in the Greater Milwaukee Foundation’s On The Table discussions. Participants shared their personal stories and discussed questions like “what do you love about your neighborhood,” and “what was the story about race that you grew up with?” After strengthening community bonds in our small groups, we rejoined the audience for the beginning of the StorySlam. 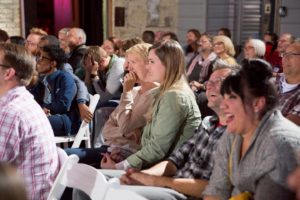 First time teller Erin Bloodgood opened Season 9 with a story of a weekend train trip while studying abroad in Germany. After a 12-hour return journey, 3 missed transfers, and 2 kind strangers, Erin and her friends made it back a half hour before class.

Elaine Maly and Jonathan Gorton, tellers 2 and 3, also shared eventful trips. Elaine took a white water rafting trip over Labor Day weekend. She was thrown from the raft but refused to ruin her grandson’s summer vacation by drowning. Thankfully the guide got her back in the raft… just in time for her swim trunks to fall off.

Jonathan spent a few months in Florida for paramedic training. With no friends in the area, he decided to go caving alone. He used a kite string to find his way back out, which worked great until the string broke. Hours later Jonathan was back at the hospital, recuperating for his next trip. 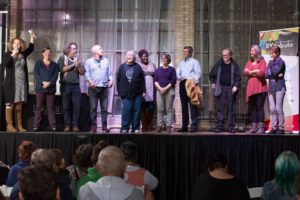 All tellers take the stage before voting

Gordon Leech managed to get a date with Kashi even though he’d repeatedly forgotten her name. It was going great until he realized– this time he forgot his wallet.

Mel Miskimen got to spend time with a crush too: the one and only Sting. She received a backstage pass as a birthday gift, and got within a few feet of her true love Sting before security escorted her out. Maryann Gorski also received a gift: a “no strings” trip to Jamaica that went spectacularly wrong.

Ex Fabula veteran Bill Stevens had the perfect plan: treat the mold in his shower while taking a shower. What could go wrong?

As a teenager, Michael Bathke hosted friends visiting from the University of Illinois. They had a few drinks and went out to find some entertainment, and the whole group ended up finding out that it is illegal to fall out of a water tower. 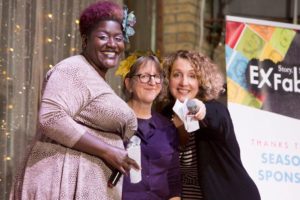 Ex Fabula Fellow Liza Kessler had a baby in 2006. Same sex marriage was not yet legal, so she and her then partner had a first hand experience in everything that could go wrong when two women seek second parent adoption in court.

Votes were tallied and the first winner of Season 9 was Mel Miskimen. We’re thankful to Hot Water Wherehouse for kicking off the new season, and we hope to see you at our next StorySlam: “Work” on November 9 at 3041 North.