Skip to content
Home/Recaps/Risking It: A Recap
Previous Next

Risking It: A Recap

Risk. Some people avoid it like the plague, taking calculated risks only when absolutely necessary. Others believe without risk there’s no real reward. On Friday, November 17th the South Milwaukee Performing Arts Center invited Ex Fabula to its beautiful stage for a special, curated Storytelling event focused on the theme “Risking It.” The event featured stories from community members – including several first-time tellers who participated in storytelling workshops earlier this fall.

The night may have been cold and rainy but inside the audience was warm and inviting as the first Storyteller, Christina Oster took the stage. Christina occasionally works as professional seat-filler at award shows. Working the ESPYS, she spotted an open seat next to Wisconsin sweetheart, Aaron Rodgers. Though it was assigned to someone else, Christina risked never working again for her one chance to sit next to #12.

Speaking of work, Gordon Leech works as a lawyer. As a lawyer, Gordon deals with plenty of unscrupulous people. And as a lawyer, plenty of people assume Gordon is unscrupulous. He’s not (we promise). So when he missed a filing deadline that would likely lose his case, he faced a moral dilemma. Pass the buck and blame the secretary or take a risk, own his mistake and ask the judge for an extension. It seems the old scripture to be true. The truth shall set you free.

Nolan Eggleston is a successful, gregarious junior at South Milwaukee High School. However, he didn’t start out that way. Looking for an easy “A” his sophomore year Nolan decided to take an art class. Nolan isn’t an artist. Faced with a choice of dropping the class or blowing his grade point, Nolan took the risk. He may not have earned the “A” but he learned something about perseverance.

Peter May wasn’t much older than Nolan when he stood in a narrow hallway of a college radio station on February 2, 1972. The hallway was filled with 100 other 19-year-old boys all, waiting on the same thing—the draft numbers. His number was never called. Yet thanks to a plan of his Dad’s, Peter was still going to Nam. Until he decided that he’d rather risk facing the army than joining a war with no purpose.

Signs are all around us. Chris McIntyre Perceptions (C.M.P) grew up torn between two worlds. In one world lived his Christian Evangelist mom. In the other was his drug dealer dad. In his own world, C.M.P was an artist and a dreamer. At 18 he headed to California to make music but soon found himself in the same bad business as his father. Until a sign from above told him to get out of the business and he quit that very day. 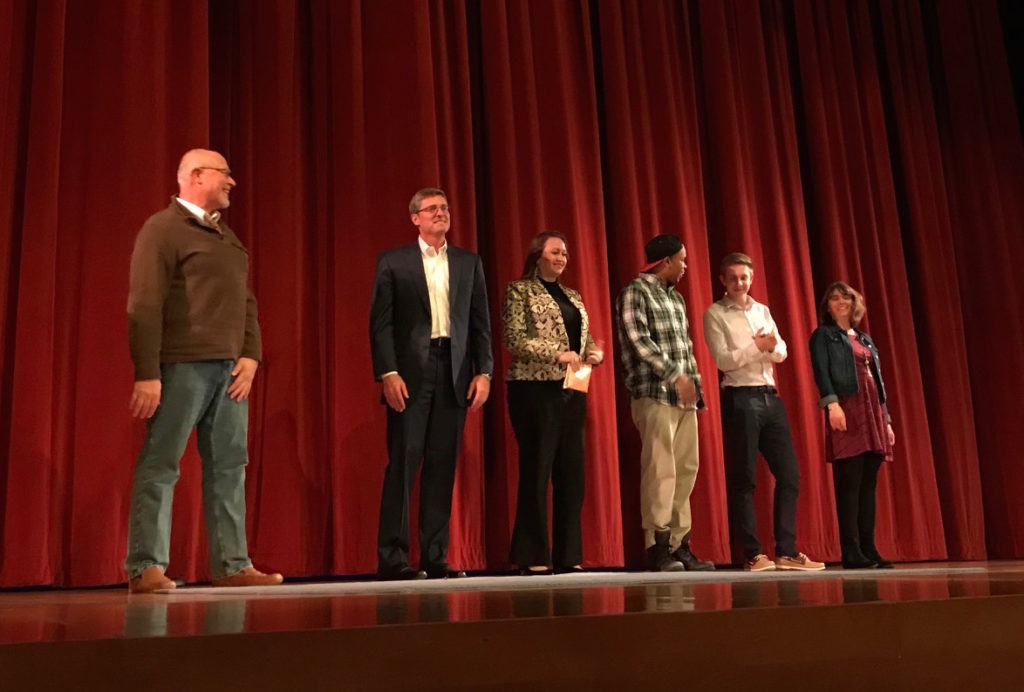 Speaking of signs, Pam Grady was in 7th grade when she woke from a dream about walking hand-in-hand down the hallway with a mystery boy. Days later she looked at the drum section and spotted a boy named Kenny. The mystery boy was Kenny! Kenny? Through the years into and after college the couple had near misses and bad timing. But the feelings and what ifs remained in the recesses of Pam’s memory. Until one December day something whispered “if not now, when” and Pam sent the Christmas card that would change her life.

Thanks again to all the brave storytellers – and to the South Milwaukee Performing Arts Center for partnering with us for this wonderful evening. We hope to do it again sometime!

Would you like to take a risk? Telling your first Ex Fabula is a great way to end 2017 or start 2018 just right. Visit ExFabula.org for coming StorySlam and other Ex Fabula events.