To end 2017, we brought our Ex Fabulite family together for one last StorySlam: Tradition at the Milwaukee Public Museum. We walked through dinosaurs, old Milwaukee and the rain forest to get to the show but it was worth it. Old and new traditions were explored as members and first time storytellers took the stage. 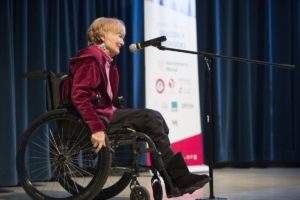 For Barbara Leigh, traditions started unintentionally in 1972 in an old spooky barn house. Chickens with beaks wide opened screamed at all hours of the night. To get in the holiday spirit, she invited all of her friends and family to get together. Now she knows traditions help you get through the tough time.

One tradition between Rachel Sauer and her mom is filled with strange illnesses. Every October since she has landed in the hospital, to the point where she saved for the medical bills in September.

Marcia Szaelewski tradition was being in charge of bringing the easy stuff at Thanksgiving dinners: sparkly fake wine, pickles, pumpkin pie and so on. Now she has 48 dinner rolls that she is in charge of. It’s never too late to start a tradition, even if it’s hard. 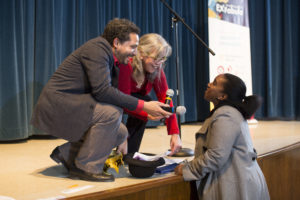 The entire Bogney family comes together for their patriarch Christmas tree.  Then Deb Bogney’s parents they got a brand new tree that can play music. The only problem? It played multiple songs at the same time. If only her parents weren’t deaf, then they would be able to enjoy it. 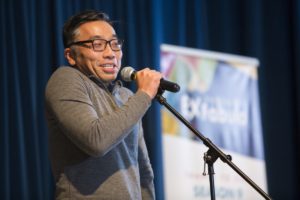 As a professional hunger fighter, most of David Lee’s life is about food. Thanksgiving is his favorite holiday, so he tried to win his ex-girlfriend back in college by cooking her a Thanksgiving dinner.  He discovered he knew how to cook and bring people together for a sense of community.

When Tony Anderson started teaching second grade, he realized discussing Santa is a minefield. He pops up anytime, anyplace. Discussing any topic, Santa seems to come up. Then, when no Santa incidents occurred after winter break – one child declared there is no Santa Claus!

The story of Ex Fabula was told by Meghan and all of the traditions that were formed. StorySlams, Storytelling, workshops, coaching and more. New voices formed, and new traditions too.

Sarah Bell spent her entire life volunteering for Christmas. Then her parents moved away, and she had to create her own tradition. Now she does the Lakefront brewery tour and bar hops on Brady street every year.

As one of six kids, Jonathan Gorton didn’t grow up with much. Driving up lakeshore drive in Milwaukee seemed like magic compared to growing up in  of Chicago. It was his favorite tradition as a kid.

Jessica Bett’s story of tradition is about one that needed to end, of a road trip that endured the worst winter weather every year. It’s not a tradition she misses, the one of who will die? Us or someone else? 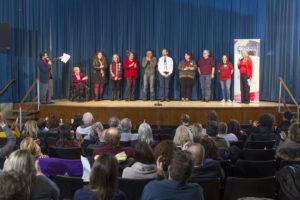 All of the speakers from the StorySlam: Tradition in order of storytelling.

Thank you to Milwaukee Public Museum for partnering with us for this event. We will be back in 2018 with our New Year Spectacular: Break Free. If you’re interested in MPM’s upcoming events, check them out here.