They say first impressions are everything, but some of us need a few tries to really enjoy something new. Ex Fabula fans met on March 13 at the Times Theater to talk about our Acquired Tastes.

Peter Woods started us off with the story of his first semester as a teacher. He went home every night frustrated, mostly due to a group of misbehaving boys. When he let slip that he had recently opened for one of their favorite punk bands, the boys realized their first impression of Mr. Woods might need adjusting. 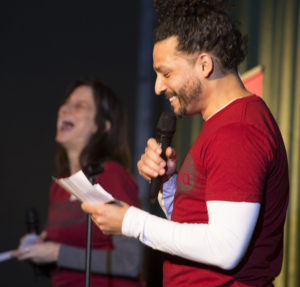 Eve Eiseman on the other hand, learned to play things a little closer to her chest. After revealing the secret of her brownie recipe, her mother de-acquired her taste for them.

There’s an old saying: it’s not a party until someone brings up cattle insemination. Liza Kessler learned that lesson as a teen. The first time she met her German relatives, she was treated to an extremely detailed description of their daily toil: harvesting bull semen.

Our first newbie of the night was a long time Ex Fabula Volunteer: Jessica Betts. Jessica was a strong willed child, but eventually one of her classmates acquired the taste and they are still friends.

Shep Crumrine and April Leberfing both acquired their tastes as young adults. One learned to enjoy running, and the other found his taste for beer.

Joel Dresang mourned that he didn’t even try to enjoy any of his father’s hobbies until it was too late. Peter May took us across the planet to New Zealand, for a taste of the Maori culture, sea urchins, and a mouthful of live moth. 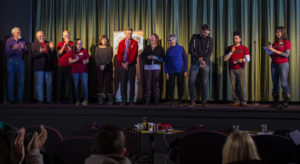 All tellers line up for a brief recap before the audience votes. Photo by Art Montes.

Jim Winship finished the night with the story of how he learned to stop worrying and love the Ex Fabula stage. The Ex Fabula audience returned that love for all the tellers, and chose Joel Dresang as the night’s winner.

We’re thankful to Times Cinema for hosting, for our Event Partner Outpost Natural Foods Cooperative, and for the awesome members and supporters that filled the house!

Have a taste for more? We hope you’ll join us Monday, March 27 for Secret Fabula: Out of This World!