Skip to content
Home/Recaps, Secret Fabula/Secret Fabula Recap: Out of This World
Previous Next

Secret Fabula Recap: Out of This World

Our first Secret Fabula of 2017 took us on a wild, out-of-this-world adventure. A sold-out crowd of about 70 Ex Fabula members and friends gathered in the intimate UWM Planetarium for team trivia and stories under the stars.

After snacks and mingling, attendees moved into the planetarium for team trivia. Randomly assigned teams of four worked on a matching game that helped to clarify the difference between Meteoroids and Meteorites.  After reviewing the answers, one team (lucky guessers, they claimed) walked away with Astronaut Ice Cream. 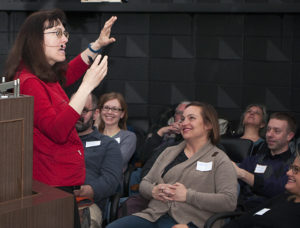 Next, we turned things over to our wonderful host, UWM physics professor and director of the Planetariu Dr. Jean Creighton. Dr. Creighton kicked off the night with stories about her own stargazing. In 2014, Creighton was selected to be one of 24 ambassadors to fly 45,000 feet into the sky aboard NASA’s SOFIA – the Stratospheric Observatory for Infrared Technology. SOFIA is the largest flying astronomical observatory in the world.
Growing up, Creighton knew she wanted to do something with astronomy. At the age of 5, she asked her mother how stars are born. Creighton’s interest in space and stars grew as she did with three major events that forever changed her life.

Next  the lights were dimmed for a planetarium show. Creighton led Ex Fabula stargazers through a highly interactive exploration of stars and constellation formations, all of which garnered various “oohhs,” “aahhs” and hand claps. 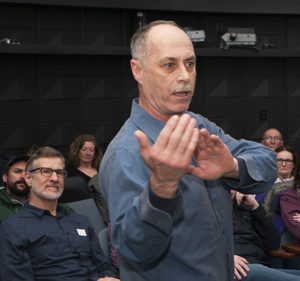 Then Mike took the stage and told a sweet story he called “Looking Up.” Mike told of adventures he has taken over the years with his wife of 36 years and their conversations with the night sky from the cabin they enjoy.

Ex Fabula volunteer, Lily‘s story is in memory of her grandparents. When they passed away, Lily and her family spread their ashes together at Kitt Peak Obseravtory in Arizona. As a family, they visit often, planting flowers and looking to find the two brightest stars in the sky.

Sue grew up in a big city with big lights. But when she first discovered the night sky in a country setting, she was terrified by the stark contrast and calm that followed.

We’re still starry-eyed from the beautiful things we heard and saw at the UWM Planetarium and hope that more stargazing and stories are in our future. We hope you’ll become a member of Ex Fabula and receive free tickets, special offers and discounts! Also, hope to see you at our next StorySlam: Only In Milwaukee on Wednesday, April 12.