Only In Milwaukee StorySlam Recap

Only In Milwaukee StorySlam Recap

Milwaukee is a uniquely diverse city. We’re known for our beer and brats, but locals know there’s much more. We’ve got the Bronze Fonz, The Calatrava and some might say, we even had a lion. On Wednesday, we gathered at 3041 North. Nine storytellers shared their “Only In Milwaukee” experiences. 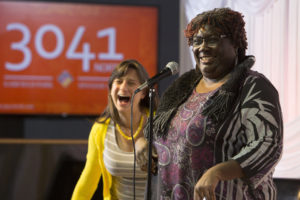 “Only In Milwaukee” emcees, Megan McGee and Lisa Williams. Photo by Art Montes.

Sue Blaustein moved to Milwaukee in 1979, but by 1983, she learned just how bad housing discrimination was. Ex Fabula board director, Meghan Koven, told a story combining the County Stadium parking lot, and how she recognized her white privilege.

Have you ever seen someone but couldn’t remember where you knew them from? That happened to Weston Maier, and a chance meeting ended up saving his life.

Raina Johnson took on Milwaukee’s perception of public transportation with her story about what happened the day after she got a drivers license.

Tiffany Kossow‘s first impression of Milwaukee wasn’t exactly the best impression – but despite an incident with beer, frat boys and an attic apartment, she’s come to love the city.

A familiar face to the Ex Fabula stage, Catherine Miller got the audience thinking about a different kind of art, one she calls Milwaukee Realism – named for the kindness of her neighbors.

Our next teller, Mary Wacker, told a heartfelt story about being in the grocery store check-out and paying it forward, because someone did that for her weeks prior. 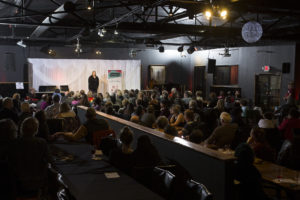 Crowd shot of “Only In Milwaukee” at 3041 North. Photo by Art Montes.

Dan Baldwin was nostalgic about Milwaukee in the ’80s. Life on the East Side, hanging out by the lake front, and the diversity of friendships he has because of it.

Our last story teller, Peter May, assumed that if something is left on the curb, it’s “free-for-the-taking.” He later found out just how wrong he was.

While the audience members voted for their favorite (Peter May), our two hostesses, executive director Megan McGee and Ex Fabula fellow Lisa Williams read UltraShorts and shared information about upcoming events with MKE Big Read, including a free bilingual StorySlam on May 4th.

Thank you to all of our Season 8 sponsors, venue hosts and tellers. See you at ALL STARS: Unfinished Business on May 18th.