Hola! ¿Te gustaría escuchar historias personales? On Thursday locals poured into Hot Water Wherehouse for a what was sure to be a very unique evening. As part of the Puente Project, Ex Fabula held its first bilingual StorySlam; making it also the first in the nation. The crowd was treated to true, personal stories from storytellers on the theme American Dream/el sueño Americano . Megan McGee as emcee shared announcements and UltraShorts throughout the night with the assistance of interpreters.

It’s always tough trying to figure out where you belong. First timer Isabel Castro described her tale of two cities upbringing, which had her walking the line between Mexico and ‘gringoland’. Dianne Caraballo, the night’s second newcomer, shared a somewhat bittersweet narrative about the maternal sacrifices and strictness that are helping her to achieve her ‘American dream’. Many things are tied to culture, identity. Food is definitely one of those things. Jeanette Arellano‘s hilarious story about field trips, American & Mexican lunches and being true to oneself delighted the crowd, while making them just a little bit hungry.

After a brief intermission, the crowd was welcomed back with more bilingual UltraShorts and announcements. The  second half of the evening kicked off with three first time storytellers! Carolina Soza pumped the crowd up reminiscing about rebellion, fighting for dignity & knowledge and feeling at home with the other ‘disenfranchised folk’. Cesar Torres followed suit with his account about coming to America to improve his quality of life;working through the struggles of being a proud immigrant while feeling welcomed & unwelcome. Rosa Veloz, the evening’s final teller, shared the harrowing tale of her family crossing the border visibly touched a nerve with some of the audience members. As the votes were being tallied, guest teller Jason Cleereman talked about witnessing prejudice and his own moments of bigotry. At the end of the evening, congratulations were in order for Audience Favorite Jeanette Arellano ! Congrats! 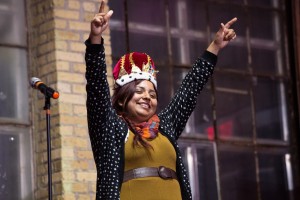 These stories were amazing! Each one full of struggles, dreams and joys that everyone can relate to. A very big thanks to the storytellers, interpreters and volunteers – the event was a success thanks to you! Many thanks to those who came out, to Hot Water Wherehouse, the City of Milwaukee Arts Board, UW-Milwaukee Cultures and Communities Program and season 7 sponsor Transfer Pizzeria and Cafe.