On Tuesday night, a diverse crowd showed up at 3041North to enjoy true, personal stories on the theme of Fatherhood. Emcee Leah Delaney got the crowd pumped up with announcements. Special guest Brit Nicole of PENtastic and United Way joined her, reading father themed UltraShorts. Dasha Kelly later joined in on the emcee duties.

Bill Stevens kicked the night off with a tale of bike rides, neighborhood kids and fatherly advice: footballs & bicycles don’t mix. Safety first. Molly Snyder followed up with a bittersweet story of paternal support & the ability to repay  parental sacrifices. First time storyteller Ceasar Crayton‘s narrative of an surrogate parentage included his plans for a healthier family unit of his own one day. After a brief intermission, along with more news & notes, the crowd was treated to a triple threat of new storytellers! Sometimes you only need to ask one question to know if someone is the one for you. Dawn Helmrich took the crowd through an endearing story of love, sacrifice & admiration she has for her husband. Shawn Mitchell beamed with pride while sharing his colorful account on the joys & surprises of kids, blending families. Awkward situations sometimes arise between fathers & their children. Finishing up the second half of the evening, Liza Kessler stood before the crowd, reliving a few life moments;including her father’s brief review on the birds & the bees.

One final intermission & the audience was welcomed back by LaShawndra Vernon of United Way. She spoke to   the crowd on the importance of fatherhood, safe babies and strengthening community bonds; reminding the diverse group that we are all in this together. After her thought provoking words, a few more UltraShorts & announcements, the crowd was treated to more tales. Michael Mishlove enthusiastically dished on the joys that fatherhood has brought to his life. Fun, pranks & standing up for your children is what its all about. Nika Hood shared his fears & concerns about being not only a man of color, but a father in the contemptuous society we’re all carefully navigating through. Nelson Lopez echoed his fellow storyteller’s sentiments, expressing his thoughts on his own father & how he strives to be a more meaningful caregiver. Horace, the evening’s final teller, rounded out the night ith his narrative on how proud he is of his father & his contributions to the community. Great job to all of the storytellers! As the votes were tallied, guest storyteller Terron Edwards of Walnut Way shared his history  of fatherhood accomplishments within the community & beyond. In the end, congrats went to Audience Favorite Molly Snyder! Hooray! 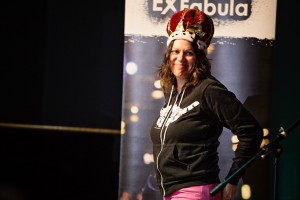 Ten storytellers, special guests; tacos and true, personal stories! Many thanks to our wonderful volunteers, all those who came out and to our storytellers for gracing the stage! Special thanks to PENtastic, Walnut Way, United Way of Greater Milwaukee & Waukesha County and season sponsor Transfer Pizzeria Cafe. Stay tuned for more events & news!