Thank you to everyone who joined us at the lovely Waukesha Civic Theatre on Thursday the 5th for our second StorySlam with Waukesha Reads!

Last year, we explored the themes in the work of Edgar Allen Poe with a “Losing My Mind” slam as part of Waukesha Reads. Our partner was the Waukesha Public Library, the local coordinator for the Big Read, a program of the National Endowment for the Arts, which unites the community through great books. 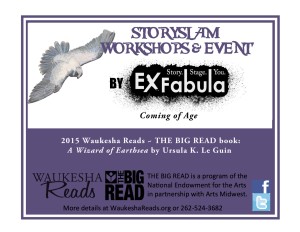 This year, we were thrilled to partner with Waukesha Reads for workshops and a StorySlam on the theme of “Coming of Age”, which figures prominently in Ursula K. Le Guin’s fantasy novel, The Wizard of Earthsea.

The evening began with a fantastically daring story from Linda Martin about Jimmy, the Hungry Boy who Dared, a 16 year old who was an important first in her life. “Not everybody had that,” she noted, looking  back fondly. Next, Caitlin Sprague spoke of a car accident she had as a teenager; years later, she was able to pass along some good advice to a teen in a similar situation.

The next story came from Ex Fabula Executive Director Megan McGee, who revealed how some college mischief (fireworks! police!) gave her confidence to face Brad and the other super seniors that terrified her. Then, Erin Johnston shared how she became a member of the skunk club. “After the fact, it’s always easy to be brave,” she mused.

After a brief break, Ex Fabulite Jessica Betts told how she learned the real spirit of Santa – and how her nuanced understanding let to an awkward incident that later became a blessing in disguise. Then, Page Remmers of Waukesha Community Art Project was interviewed by Megan in a format called the Terkel. After years working as a speech therapist, she went back to school to get a BA in Art; despite her fears, she found her way and now helps middle schoolers to be “artists of their own lives”. The final tale of the night came from Charlene Sivyer, whose coming of age’ was tied to her German and Philippine ancestry. “I never felt like I fit in anywhere,” she noted – and it just got more complex when she went to her first Boy Girl party.

All in all, it was a lovely evening – with plenty of UltraShorts as well. Thank you to everyone who attended and to our wonderful partners, Waukesha Reads!