Milwaukee: home to some since childhood, while brand new to others. If there’s one thing people can agree on, though it’s that Milwaukee is special. At least that was the consensus during the Doors Open Milwaukee StorySlam on Saturday evening at the Wisconsin Black Historical Society. Ex Fabula teamed up with Historic Milwaukee for a series of Milwaukee-inspired stories from a hand-picked group of tellers and a common thread could be heard: you don’t have to attend Doors Open Milwaukee to see the openness this city offers year-round.

First to the stage was Adam Carr, who warned the audience in advance that “This is going to be a very physical story!” Why? Because sometimes pulling off a “Temporary Resurfacing” project on Milwaukee’s Mitchell Street requires a little bit of maneuvering around buildings, some extra grippy shoes, and a whole lot of love from friends and neighbors. 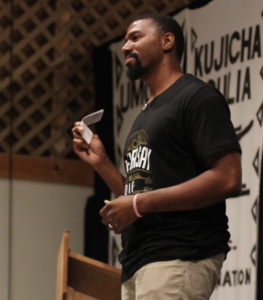 Where were you on 9/11/2011? It’s a question we can all relate to.  For Jacqueline Rice the day was significant even before she heard the news, because it was the anniversary of her mother’s death. In the end, she and nearly 1,000 other Milwaukee residents blew bubbles, lit candles, and hugged one another at Rainbow Summer that evening, demonstrating the power of grief and music in bringing people together.

Sometimes, you find home in the most unexpected of places. Season 7 ALL STAR Jeanette Arellano was up next and she found home in… a kitchen. Her heartwarming story of moving to Milwaukee and feeling disconnected until she started working in the kitchen at MIAD, surrounded by music and boisterous characters, had the audience laughing and grinning from ear to ear. But what about those who don’t have a home? First timer Lisa Williams’ poignant recollection about her battle with depression, anxiety, and homelessness, and ultimately, the move to Milwaukee that saved her life, reminded us to be thankful for everything we have!

We couldn’t have a Milwaukee-inspired StorySlam without some nostalgia, which is exactly what we got with first-time teller Patrick O’Brien reminiscing on his childhood memories from a local Milwaukee park. From games of Capture the Flag to chess tournaments to band concerts, the “Enderis Boys” found a childhood home at Enderis Park.

Kendra Spain – another first time teller – was called up to the stage next. Sadly, her memories of growing up surrounded by violence and fear reflect the current state of the city too well. Her story about her father’s death and neighbors too scared to speak up left the crowd feeling inspired by her courage.

For our next teller, who happens to be an Ex Fabula Fellow, Katharina Hren, she needed to find herself before she could call Milwaukee home. From moving to the United States from Germany at the age of 6 to her return to her birth country as an adult, Katharina discovered that being German is complicated. For all its uniqueness, though, Milwaukee was a place she could truly call home and be accepted.

Last (but certainly not least) to the stage was André Lee Ellis, who told the audience about his founding of We Got This Milwaukee and how it grew from a small, ambitious initiative to help the black kids in his community into an inspiring movement in Milwaukee. He received a standing ovation.

Thanks to everyone who joined us and made this event so special – to our volunteers, our sponsors, the Wisconsin Black Historical Society, and Historic Milwaukee!