What comes along with end-of-summer barbecues and the back to school season? Well, the Ex Fabula season, of course! Our Season 8 opener, ‘Risking It’, took place Thursday evening in Bronzeville.  Stories have a way of coming full circle, and so do season openers; we opened our Season 7 StorySlam at Garfield’s 502, too. 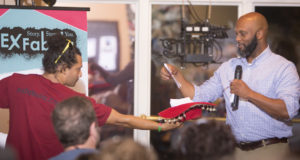 Season 8 opened with a few risks. First to the stage was Claude. He told a story about hitch hiking, with lots of adventure weaved in. His conclusion about Risking It: risk responsibly.

Like stories, some familial relationships don’t always go as planned, and that’s a risk that many of us can relate to. Mark Steidl told a three-part story about his father death, and how some family bonds are just meant to be broken.

Next to the stage was Anja Sieger. Her hilarious story about having over 35 food allergies, a trip to the hospital and a date that goes horribly wrong had the crowd at Garfield’s laughing and crying at the same time.

Have you ever taken a risk and thought, “I’d like to try something new?” Well, our next teller Angela did. While in the military, she was offered a free skiing trip. She took the chance and risked it all on the bunny hill, twisted ankle and all.

Oh, and of course we can’t talk about risk without talking about love. Sherrie’s story  was all about the risk she took on a boy in Wisconsin over 45 years ago. 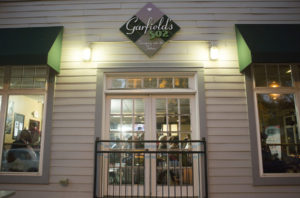 Kate joined the crew of tellers and took a risk she’s taken before; as she talks about her passions of cooking and animals, it becomes less and a risk to also talk about being a persona with mental illness.
Some of the hardest lessons we learn could be from someone else’s risk. While going about her morning routine, Jill Potkay thought she lost her phone, ipad, laptop and her wallet – only to realize that someone else took a risk by robbing her.

Next, Linda told a story about being in the operating room with a doctor who really didn’t want to be a doctor. Talk about a risk! 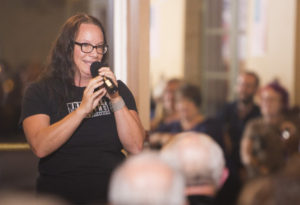 Jennifer Hoepner’s risking it story had us all laughing. Her story involved a college night, public indecency and the name of her 5th grade pen pal, which she used when the police arrived.

While votes were being tallied, Ex Fabula Fellow Brian Chiu shared a story about some unexpected challenges he encountered when he talked to other Teaching Assistants about organizing a union on campus.

At the end of the night, emcees Leah Delaney and Nakia Hood announced that the evening’s Audience Favorite was Jennifer! Congratulations to Jennifer, and thanks to everyone who joined us, as well as all the volunteers, our season sponsors, and our event sponsor the Milwaukee Film Festival.