If you’ve been to an Ex Fabula StorySlam or other event, you know what it’s like to be moved by a great story. One way to support the great storytelling you hear at Ex Fabula is by becoming a member.

One of our members, Elaine Maly, told a story at our last StorySlam. When we talked with her a few days later, she shared how she got connected with Ex Fabula, what it’s like to get called on stage to tell a story, and how Ex Fabula helps us learn.

TP: What first got you interested in Ex Fabula?

EM: I went to a big Ex Fabula thing at Alverno a few years ago. I was so impressed. I’ve been part of a writer’s round table group through Red Oak Studio. I do a lot of personal stories and essays and memoirs . . . so somebody said, “Elaine, you really need to check out Ex Fabula.” I went to a workshop last year and then I just went to another one . . . I really wanted to join. Life changed enough that I could make a commitment, so I did the membership thing this year.

TP: Why did you choose to become a member?

EM: Well, people have suggested it before and I’ve been to a couple of workshops and I really, really enjoyed them. I know other people who are connected already and they’re people I know and admire. I really like the whole mission about building community through storytelling because I really believe that. 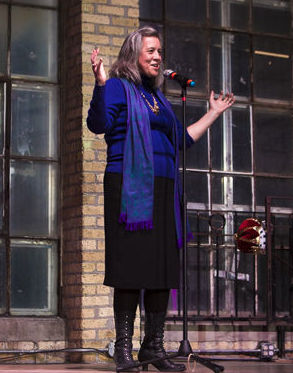 TP: How have you benefited from your membership so far?

EM: Well, through the workshop I learned about improving my storytelling. When I did my story, I was just busy and I just got up and did it. In hindsight, they gave me all this feedback, advice, and tools on how to make this better– I shoulda done it (laughs). But next time, having that experience, I know how important it is. The person who won (Molly Snyder) who told that bug story, it was like, “Ah! there is a master at work.” She used all the elements we learned in the workshop. The confidence to do it without notes and everything. I just really appreciate it and learned from that.

TP: I was there for the last StorySlam, so I know you told a story, which I really liked. What was it like to tell your story on stage?

EM: It was really invigorating when they call you, because it’s kind of suspenseful. You don’t know if you are going to get called. I felt like I won, you know? Like I won something great. And you know, it was! It was an opportunity to have people pay attention to something creative that I did. Just seeing the other people who went first, it was like, wow, these people aren’t professional poets or something, they’re just like me.

TP: I understand that you write stories, too. Is there something that you’re currently working on?

EM: I’m going to have a series of stories I’ve been compiling the last couple years, so I’m really looking forward to being part of Ex Fabula so I can tell them. To be able to tell (a story) out loud is as good as getting it published.

TP: What impressed you about that first show you went to?

EM: The diversity of the people there and the mixture of stories; the learning by other people’s experiences. The minute you know somebody who’s had an issue or has had something happen to them, it becomes more real in your life. If you never heard anybody talking about how racism impacted them, for example, it’s not that close to you. It’s like, “I’ve heard about it but . . .” It makes everything personal and I like that— in a very positive way. Because now I’ve met somebody and I’ve heard his story and I’ve heard why that’s difficult.

TP: Why is it important to support a community storytelling organization like Ex Fabula?

EM: I think because we learn so much from each other and it makes our bonds as a community tighter, much stronger; much more interwoven because we hear these experiences about diverse people. I mean, people who are us. I suppose it’s reaffirming and eye-opening at the same time.

TP: Why is telling your story important to you?

EM: One piece is just really personal, because it’s about using that right side of your brain, that creativity.The other part is about having your experiences affirmed too, by having an audience that’s sitting there shaking their heads in your direction going “yeah”, “no”, “I understand”.

Ex Fabula memberships are available for purchase online and make excellent gifts! Plus, for each membership purchased in December 2014, the member will also receive a free ticket (two for Duo) to the January 25 Secret Fabula event which is 1-3 pm at the Brass Rooster.