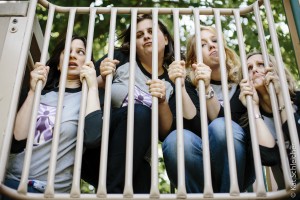 Ever wanted to experience something before it happens? Or maybe relive a moment in time, with a more hilarious, less embarrassing ending? The ladies of broadminded comedy, Milwaukee’s premier (and only) all-female sketch comedy group can make that a reality! The broads (Stacy Babl, Anne Graff LaDisa, Melissa Kingston and Megan McGee) will transform your true, personal story into comedy gold! You are more than welcome to record the chicas as they are replaying your story, which you can and should share with family, friends and perhaps the occasional stranger.

The broads honed their comedic skills at ComedySportz Milwaukee and Chicago’s Second City Conservatory. In 2006 they awesomely combined their powers and began writing & performing sketches “By Women. For Everyone.” Their shows have been described as “both intelligent satire and straightforward comedy” (Russ Bickerstaff, ExpressMilwaukee). They have performed more than three hundred sketches at festivals, conferences, and parties throughout the Midwest.

And this comical sketch titled “Dentist”:

To really experience broadminded comedy in all of their riotous glory, purchase your ticket for Mea Fabula! Tickets are $40 and are available NOW for purchase at http://meafabula.brownpapertickets.com/. Don’t miss out on a chance to be a part of a unique storytelling experience! Your purchase helps Ex Fabula expand its programming, which includes StorySlams, workshops and community collaborations, giving more Milwaukeeans the chance to be heard, thus building community and strengthening our city.

Mea Fabula is proudly sponsored by: