You’ve been to a few StorySlams, attended a workshop; perhaps you’ve volunteered a time or two. Looking for another way to get involved? How about a season membership? Ex Fabula memberships were introduced at the start of Season Five and have been in full swing ever since. Kimberly sat down with Jacqueline Rice to learn more about her interest in Ex Fabula and the reasons she became a member.

Jacqueline is a Wisconsin native, librarian-at-large, mother, wife, wordsmith & caretaker of the environment. And though she’s traveled from Tobago to Tasmania, Milwaukee is her home. 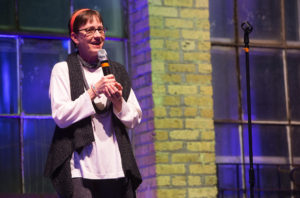 Jacqueline first heard about Ex Fabula when she picked up a flier at Anodyne Coffee in Bay View a few years ago. As a supporter of local arts & businesses she thought it was something worth checking out.

She went to her first StorySlam at the Times Cinema in January 2014 where she was introduced to the Ex Fabula experience. “The volunteers were very welcoming and I was impressed at how well-organized the event was.” Sipping her beer as the storytelling began, she got caught up watching and listening. She liked that the storytellers were a diverse group with equally diverse stories. Drawn in by the positive vibe and looking for a way to support the organization she went to the website for more info.

Jacqueline and other members on a Secret Fabula tour.

Jacqueline chose to become a member because she strongly believes in Ex Fabula’s mission— strengthening community bonds. “Becoming a member was a ‘no brainer’ for me.”She believes Ex Fabula is good for Milwaukee and that it is every Milwaukeean’s responsibility to make the city a better place to live. She knows that her membership fees are one of the ways that Ex Fabula is able to accomplish their goals including but not limited to providing a supportive setting for any and all community members to tell stories. “Being heard and connecting with others can’t be overrated.”

Jacqueline loves attending Secret Fabula events. “This sweet membership perk, invitations to Secret Fabula events has more than lived up to my expectations.” She’s been to several, including one at the Sugar Bee Farm & Energy Exchange in May of 2015. She described it as both interesting and delicious. (read the recap here!) There was team trivia, assorted stories and food—sautéed oyster mushrooms, that were grown there, served on a bed of greens. “Perfection.” 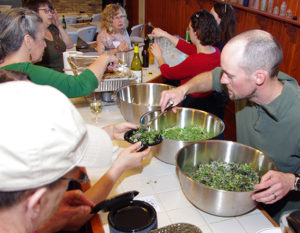 In summary, Jacqueline says that “having a membership is a great deal—after using your passes for StorySlams and workshop discounts, the membership pays for itself!” Say ‘hi’ to Jacqueline if you see her at a StorySlam or workshop—she’s happy to tell you more of her story!

Thanks Jacqueline! Ex Fabula appreciates all of its members and sponsors for their continued support. If you’re interested in learning more about how you can support Ex Fabula, please click here .