The Force was with us on May 4th as Ex Fabula took over the stage at Milwaukee Central Library’s Centennial Hall for the MKE Big Read Bilingual StorySlam. This year Ex Fabula was pleased to partner with Milwaukee Public Library for the 2017 MKE Big Read and our Storytellers showed some amazing “Courage” as they shared stories on this theme.

Ex Fabula’s host with the most, Nelson López took to the stage as our emcee of the evening, as he and our interpreters, along with our Storytellers, danced fluidly between English and Spanish sharing a few laughs along with the audience.

Our first Storyteller of the night, Liliana (Lili) Gutierrez, was just a girl when her father declared her family would leave Cuba, their homeland, in 1966. This was no easy process as the government was growing increasingly rigid and soldiers were ordered to take inventory of (and then ownership of) family possessions. Yet young Lili felt the government didn’t have a right to everything and risked much more than she realized to save many cherished family treasures.

No stranger to the Ex Fabula stage, our second Storyteller Jeanette Arellano shared a humorous tale of bravery. We’ve all gotten to that point in a romantic relationship where one partner asks, “What haven’t you told me that you’re afraid to tell?” After avoiding her boyfriend’s question for as long as possible, Jeanette finally got up the courage to share her secret. Now, she’s surprised he’ll still kiss her. 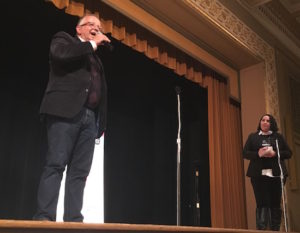 Raul Galvan remembers. He was 10-years-old that day in 1961 when he got on the school bus in Havana. Like every other day her wore his school uniform, khakis, blue shirt and matching tie. Unlike every other day, he was evacuated from school that afternoon and for the next four months chaos followed as the country exploded and his parents tried, desperately, to get him out of the country. After several failed attempts, he was put on a plane and 10-year-old Raul landed in Miami, alone to live with an aunt until his parents could find a way to safely join them. 60 years later, he is still amazed by he courage of children in such desperate situations. 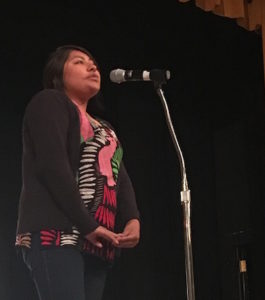 Our fourth Storyteller,  began by saying that she comes from the people of the clouds. Juxtlahuaca is a very small town in the mountains of Oaxaca, Mexico, where she was born. It’s been 20 years since she has been home. Recently she returned remembering the scents and sounds. Though she carried much guilt, as her mother couldn’t join her in this return home, afraid that as an undocumented immigrant living in the United States, her mother might not be allowed back into the country. However, what Alejandra brought back with her were stories for her mother, stories of the land, the town and the people that both women will always carry.

Our final Storyteller of the evening was a story of Carpe Diem. Ashanti Cook had traveled a lot but before moving to Milwaukee had never lived anywhere but her hometown of Houston. When she was accepted to Marquette’s Graduate program, an unknown school, in an uninteresting city in a far off state she decided, “Why not?” However, when she found herself without a car just before she was to leave for Milwaukee it was a now or never moment and time to downsize.

It was a night of beautiful storytelling, of both escape and homecoming and the beauty of diversity and language.  Thank you storytellers, interpreters, volunteers, and attendees for being part of it!

Extra special thanks go to to our event partners the Milwaukee Public Library and to the NEA Big Read, a program of the National Endowment for the Arts in partnership with Arts Midwest, which made this event possible.