On Thursday evening a packed house gathered at Turner Hall Ballroom for Ex Fabula’s Spectacular StorySlam. The crowd was treated to some comical & very true, personal stories from selected storytellers on the subject of Never Again. Megan McGee emceed the festivities with Tiffany Miller on deck reading some very questionable UltraShorts.

Rissie Lundberg kicked off the evening with her narrative of traveling to California in order to address a medical condition. She kept the crowd guessing & amused; sharing details of shorn off pulleys, a Lawrence Welk resort and how through it all she just kept driving. At the Spectacular StorySlam there’s bound to be a little something extra! The evening’s second storytellers, brothers Conn & Grant Hagen, presented their tales in The Duo storytelling format. The pair presented the crowd with a top ten list of personal never agains; including possible tax evasion, eating raw peppers & auto theft. Ah, to be young & reckless. 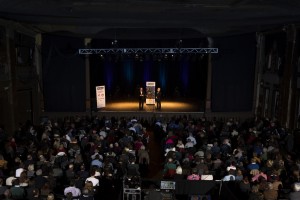 Ready for another bonus? A few Ex Fabula Fellowship participants also took to the stage! Fellow Kerri Grote introduced herself as a country girl who grew up cowboy country style; certain things are not discussed. She offered up her perspective on why society, including herself, sometimes choses silence over speaking up for those overlooked. After listening to such a poignant tale about race & privilege, the crowd was prompted to engage with a fellow audience member to discuss and decompress.

After a brief intermission, some announcements and more UltraShorts the crowd was ready for more stories. What would happen if you ever got the chance to be the big man on campus? Are things all good or do they literally crash, major burn? Lee Rowley’s hilarious college tale of comeuppance consisted of his meteoric rise from campus driver to producer to stunt driver. Some things got crushed, pride & ego included. Up next was Fellow Rochelle Fritsch. Her narrative on getting lost while driving in a neighborhood where she ‘didn’t belong’ caused the crowd to pause. She hopes that her child won’t have to experience such incidents and will prepare her nevertheless. The audience was again given the chance to review & reflect on their own experiences with race and privilege. The evening’s final storyteller, Fellow Dianne Pratt, also shared a story regarding race and privilege. Her seventies tale of an extremely unjust insurance practice, prompted a bit of local rebellion. The outcome resulted in one of the biggest payoffs and sparked legal change in how certain neighborhoods are classified. 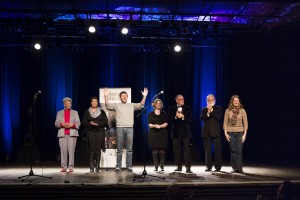 Thanks to the storytellers!

We hope everyone had a great time! Thanks to our storytellers for braving the stage! Thanks to Megan & Tiffany for keeping us informed and entertained! Ex Fabula thanks our sponsors and volunteers for their continued support. We wish you a safe and joyful holiday season!!

All photos courtesy of Art Montes