Whether or not if it’s a secret between friends, spouses or one we keep to ourselves, the secrets we keep and share can ultimately reveal something about us and our humanity. Nearly 200 guests found out how little secrets can have a big impact in our lives at Alverno’s Pitman Theater for our New Year Spectacular with the theme “Our Little Secret.” This special, curated event featured various storytelling formats, and each teller had 10-minutes to share.

The first teller to grace our stage was two-time audience favorite, Aims McGuinness. Aims told a story about a childhood adventure he had with his cousin when their Uncle asked them to buy a quart of milk. The boys had a secret about their experience at the store that didn’t last long. From that, Aims learned a lesson that has lasted a lifetime: a victory based on lies and half-truths is no victory at all. 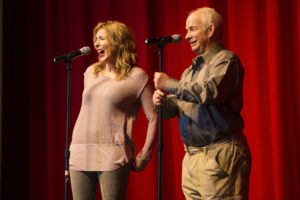 Amie and Tom share a story at the New Year Spectacular: Our Little Secret. Photo by Art Montes.

A few months ago storyteller Tom Wilke took to the stage with the help from interviewer Amie Losi. This two-person interview story format is called a Terkel. Tom’s story started out with a joke and quickly moved into some pretty serious topics. The audience heard Tom’s tales about bouncing back from unforeseen circumstances and his secret to taking control over his life.

In a sign of the times, Brian Chiu’s story resonated with a lot of people. Chiu was 10-years old when he found out that he was permanently moving to the United States from Taiwan. He grew up in a town near the U.S./Mexico border. He eventually became an organizer to support undocumented individuals. Quickly realizing the many secrets that families hold ‘living in the shadows’ – including his own.

After intermission, a few UltraShorts were read on stage and folks raced back to their seats for more stories. 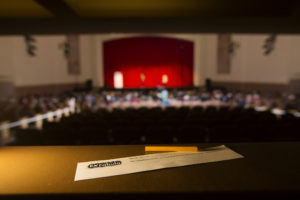 What’s a StorySlam about secrets without a love story? We heard from Antoine and Alexis Carter, a married couple who met over 14 years ago while co-working at a polish department store in the middle of a Latino neighborhood on the Southside.  The Carter’s gave us a rare treat, telling the same story – from each of their perspectives. This storytelling format is called a Rashomon, named after Japanese filmmaker Akira Kurosawa.

As part of our Easy Access Project, Ex Fabula is proud to lead the way for persons with disabilities to tell stories. Luanne McGregor told a deeply personal story that many do not get to hear because of stigma and shame. Luanne was in an abusive relationship, but called on a friend for help and a way out. She later married her friend and they have been married for over 30 years! Luanne received a standing ovation as she left the stage. 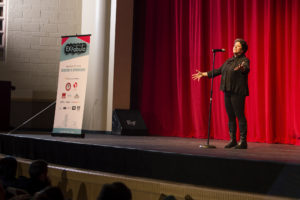 Our final teller of the afternoon was Magda Peck. Magda’s secret is something that we’ve all wrestled with, “Who am I?” Her story and her secret asked tough personal questions, but in a way that we could all relate to.

It’s not a secret but none of this would be possible without the generous support from our event sponsors the Milwaukee Arts Board and the Wisconsin Arts Board with funds from the state of Wisconsin.