Water can give life or take it away. It can be merciful and kind on a hot summer day or life-threatening on a winter’s day. Water sustains and water retains. Water keeps Milwaukee bustling and thriving. Water is something we all appreciate but simultaneously take for granted. We explored all those ideas at our February 21st “Water” StorySlam.

While all of our events foster conversation, laughter, and contemplation, this month’s StorySlam was notable for a number of reasons. It was our first time at Lakefront Brewery, and the house was packed with people ready for stories – as well as food and beer. Event partner, Reflo Sustainable Water Solutions, unveiled Water Story MKE, an interactive, free app developed to help Milwaukeeans discover all the joys and mysteries of Milwaukee’s waterways. We also had other great event sponsors in the house: University of Wisconsin Sea Grant Institute, Wisconsin Coastal Management Program / NOAA, and the Wisconsin Humanities Council. 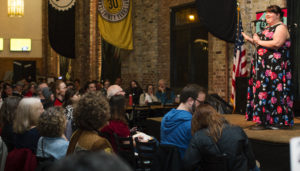 As always, nine tellers total took to the stage. First up was newcomer Sarah Bell, whose story was honored by applause and whistling. As a young girl, Sarah rejoiced in the freedom of the water until someone close to her made her feel ashamed about her body and she spiraled into despair. It wasn’t until recently, as an adult, that she rediscovered the freedom and joy of water.

Kate Schwartz was up next with her own spin on entering motherhood. In the process, we learned one of the reasons that old-time nurses had long pinkie nails.

Our next teller, Stephanie Kilen, had her own water adventure in a ceremonial sweat lodge in Mexico. What do you get when you throw salt and water on heated rocks? Hot steam, claustrophobia, and Stephanie reenacting an episode of I Love Lucy while attempting to escape the heated enclosure.

Teller Heather Swanson had a similarly eye-opening experience. During a trip to Lake Geneva to visit her sister, Heather went for a run around the lake, not knowing that her sister’s description of “around the lake” and her own were vastly different. What followed was a nearly 6 hour, 21 mile jog back to her sister’s house and a newfound appreciation for Wisconsin’s great lakes.

Next, Renee J. Beese shared a series of anecdotes about water. From her first bath to learning how to swim to defending her favorite shower curtain from an intruder, Renee had a story about water from each stage of her life.

First-time teller Amy Jensen was up next with an anecdote about fishing with her dad. One particular summer day, Amy’s dad entrusted her with a fine trout he had just caught.  Unfortunately, Amy let it slip through her grasp, leading to an epic recapture.

Tellers give 3-5 word recaps of their stories right before audience members vote.

When Andy Parmann began describing an annual camping trip with thirty of his closest friends, we knew we were in for a treat. Nothing could stop the group from tubing – not even the threat of danger due to a recent drought. One twisted ankle, a missing van, and a maelstrom of curses later, the group emerged with newfound wisdom and a story worth sharing.

While Andy’s story revealed the humor in a potentially dangerous situation, Stuart Rudolph’s story demonstrated what can happen when you don’t heed Mother Nature. Stuart and his wife Alice encountered water’s more intimidating side but luckily survived to reflect on the experience together later on. 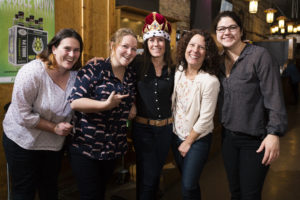 Our final teller, Vincent Bushell, wove together the history of Milwaukee’s waters and those that came before us. Whether you’re a believer or not, Vince’s story about the water effigies that used to occupy our rivers was a testament to this amazing and fluid force of nature.

As always, at the end of the night, an Audience Favorite was crowned. Congratulations should be given to Heather Swanson!  Thank you to all of our sponsors, volunteers, and attendees for being part of this phenomenal evening.