One more ALL STAR: Tom Shanahan!

One more ALL STAR: Tom Shanahan!

Tonight’s the night! We know you’ve got STARS in your eyes, but before the big event we’ve got one more ALL STAR teller for you to meet: Mr. Tom Shanahan! 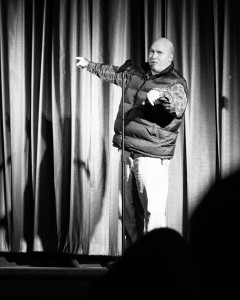 What’s one thing you love about Milwaukee?

After stating that Milwaukeeans are some of the nicest people you could ever meet I’d have to say FISH FRIES. Very few cities outside Wisconsin have this cultural phenomenon. Excellent food and the camaraderie of the group setting are exceptional.

What’s the best thing about the neighborhood you live in?

Absolutely the people and their history. There are so many families, like mine, who have been here for many generations, literally over a hundred years. You have kids playing with their friends from school or down the block who discover later in life that their grandpas and grandmas were friends. You don’t find that in a lot of places.

Just a few weeks ago we were taking an octogenarian friend to the fish fry at Saint Sebastian’s where we overheard a man with his kids say that his grandfather went to school there. Our friend asked what his family name was, and when told, asked the guy if gramps was Jack or Danny. Of course he fondly recalled each of the brothers from seventy years ago.

Another thing is the fact that the neighborhood has become racially integrated without the high drama of some other neighborhoods and suburbs. 30% black 5% other with a healthy gay and lesbian contingent has diversified and strengthened the area.

…and what would you like to see change about Milwaukee?

The perception of rural Wisconsin citizens and politicians in Madison that we live in a hell-hole of violence and destruction. Although that is what the media lead story is on a regular basis, perhaps, there could be some emphasis on progress and good things happening around us.

Finish this sentence: Wouldn’t it be cool if….

Wealthy Wisconsinites, like many lower and middle class families, committed to sharing a percentage of their income for the betterment of the society they live in. I know people who are not rich who give 5-10% of their pre tax earnings to their church and charities. Of the wealthy people I know, and I know a lot, none consider that. The penurious attitude especially pertains to those who have inherited money, by my observation as a financial professional.

I am a voracious reader. I have over a hundred books on birds, nature, hunting and Wisconsin. I have taken thousands of bird, deer , turkey, wildlife and naturalist photos.

In your opinion, what are the key components to a great story?

The story must have a hook. Something to draw you in and keep you there.

What is your favorite Ex Fabula memory?

Driving up Vliet Street past the Times Theater and seeing EX FABULA WEDNSDAY on the marquis was the deciding moment for me. I had been aware of the events for a couple of years and told myself that one day I’m going to check this out. The fact that it was within walking distance clinched it. I was not planning on speaking, only listening and observing. While watching others I decided I had to go for it, little did I know that I’d win.