Ex Fabula believes that everyone has stories worth sharing, whether you speak inglés, español, or another language – so we’re very excited to kick off el Proyecto Puente, which will build bridges (puentes) between the English and Spanish speaking communities in Milwaukee.

Full project information is available in Spanish at www.exfabula.org/en-espanol, but for those of you who don’t speak Spanish, we thought it’d be fun to escribir a blog post in Spanglish. I’m (not so secretly) hoping that we hear some Spanglish at the Slam de Historias in March –  ¡a ver si pasa!

Un poco de historia: We started bilingual programming back in 2011 when we were artists in residence at the John Michael Kohler Arts Center in Sheboygan. Then last year, we included 2 historias en español con interpretación al inglés in our December Spectacular, after which several participants suggested that we do a StorySlam completamente bilingüe.

In order to hold a Bilingual Slam, we would need to train voluntarios, offer workshops en español, and do un montón de marketing in order to reach the Spanish speaking community. Fortunately, I have a handful of contactos en la comunidad hispana. It helps that I do yoga at CORE/El Centro (and actually interpret the yoga class into Spanish) and became friends with several native Spanish speakers when I studied at UWM. So, we started planning. 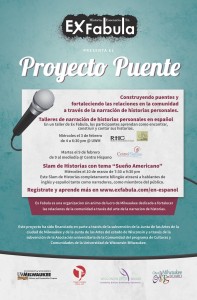 The result: Ex Fabula va a presentar 4 Spanish language Storytelling workshops, several sessiones orientativas for bilingual event volunteers, and por fin, a bilingual StorySlam on Thursday March 10. The theme will be “American Dream / Sueño Americano“, and stories can be told in English, Spanish or even Spanglish  – como dije –  and we’ll leverage interpretation so that everyone can enjoy las historias personales. Boletos are on sale now for only $8 – and workshop attendees will get descuentos especiales.

To the best of my knowledge, nuestro evento will be the first English <> Spanish bilingual StorySlam in the United States. Qué padre, ¿no? I hope you can join us for this very exciting event! And if you know Spanish speakers, please let them know about the workshops, which are either gratis or low cost ($3) thanks to the grants we’ve received. The workshops are listed on nuestra página de Facebook as well as on the website, para que sepan. We even have a special newsletter en español that you can sign up for!

There are muchísimas personas to thank for this project. Gracias a:

Hopefully this has helped everyone to better understand the Puente Project. Feel free to write your commentarios y preguntas below – and perhaps I’ll even see you at one of the eventos.

PS: Want more? Check out this blog recap of our March 10, 2016 Bilingual StorySlam!