Q&A with ALL STAR Dave Hendrickson!

Q&A with ALL STAR Dave Hendrickson!

If you’ve been to an Ex Fabula show in recent years, chances are, you’ve heard a story from frequent teller Dave Hendrickson. You may even remember his “Trust Me” story at the beginning of the season that secured him the first spot in our ALL STARS line up.

Let’s get to know this ALL STAR a little better!

How did you learn about Ex Fabula?
Radio ads, and friends went to some shows. Being a slow starter I waited for several years before I went to a show, and there I told a story.

What is your favorite Ex Fabula memory?
Easy. Winning the All-Star Story Slam in May, 2013.

Give us a random fact about you that most people don’t know.
I still have the teddy bear my Dad sent shortly after the end of WWII, for my first birthday. That’s one old bear. I still talk to him now and then although he doesn’t hear as well as he used to.

What’s one thing you love about Milwaukee?
Milwaukee.

How do you like to spend your down time?
There’s not much down time around anymore. Drinking tea and chatting with my wife on Saturday morning.

Finish this sentence: Wouldn’t it be cool if…
there were no wars, everybody had enough to eat and a place to live comfortably, there was no disease, everyone was kind to everyone else, giving was more often practiced than taking, and we’d all go to Heaven. That would be pretty cool, huh? In the meantime, it would be cool if I could have a hot fudge sundae with whipped cream, crushed nuts, and a cherry on top in about 10 minutes.

Tell us something you would NEVER do.
I would never steal candy from a baby, although a rattle and a stuffed toy or two is something else. 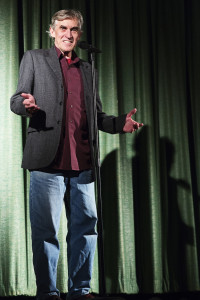 What’s it like to be on stage, sharing a part of your life with a
room full of strangers?
I never think of the audience as strangers, unless they start throwing things. There is an incredible energy and great vibe in telling a story to an audience that really wants to hear the story. I’m always edgy until I get to the microphone and say those first few words, though. The it becomes exhilarating and I’m walking on air for hours afterward. The audiences at every Ex Fabula show I’ve attended have been great.

In your opinion, what are the key components to a great story?
Every story is unique and demands a different approach, I think. I find that I can never get in all I want to in 10 minutes. As many writers have said, “You have to kill your darlings.” So, I can have something that works very well, seems to be clever, and it doesn’t work with the rest of the story. Bye, bye, darling. I guess the main key aspect is that all the elements of the story have to work together. It might help to have a character or two, and some action, too.

What’s the best thing about the neighborhood you live in?
We have mailboxes at the side of the road, no streetlights, and my neighbor plows the driveway. The neighbors in general are terrific.