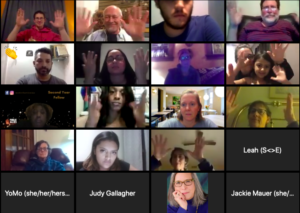 Celebrate? In 2020? Six tellers at the final “Re-imagining” slam drove home the point: even in the most turbulent times, there’ll be something to celebrate, and a way to celebrate it. The night’s emcees reflected: Blanche Brown appreciates the time she’s able to spend with family more deeply than before. Leah Delaney’s hit some rough patches, and has learned how to savor small pleasures and victories. You can’t always wait for the big joys and wins!

Mark Steidl maintains that every story is a celebration story, if you look at it the right way. His wife has a friend, Sandy, whom Mark described as an amazing woman. Over time, health challenges made it impossible for Sandy to enjoy her beautiful flower garden. Major remodeling, including the tear-down and reconstruction of a wall, was called for.

Mark’s handy, so his wife volunteered his services to her friend. No resentment…the project gave Mark a chance to have fun with tools. On his appointed weekend work days, Sandy had all the materials delivered to the site. Mark loved it! Playing with stone and dirt and specialty saws was great. But greater yet was the chance to create a bond – in this case by building a wall.

Barbara Leigh told a tale of adventure on an unseasonably mild November day. Barbara’s seen a lot of change in her life this year, involving love and relocation, for love. She left her downtown digs to live in Greenfield with her partner Ricky.

Barbara gets around with a wheelchair and has been dealing with a lung infection. Ricky’s got asthma and Parkinson’s disease. For them, a 2 ½ mile outing to Scout Lake involves reconnaissance, planning and preparation. The range of the battery-powered scooters, terrain and other factors all have to be taken into account.

Ricky didn’t feel up to all that. Staying home in bed seemed much easier. But seventy degrees in November! Barbara was not to be deterred. When Ricky yielded to her enthusiasm, they had a magical outing. Memories of that triumph gave Ricky confidence. They’re celebrating a new openness to adventures yet to come.

Everyone celebrates births and birthdays! Emily Bee described a different situation: terminating an ill-timed pregnancy. She explained how her wait at the doctors, her time on the exam table and post-op vegan pizza lunch with her partner were celebratory! Her doctor and partner were kind and she absolutely knew it wasn’t the right time in her life to become a parent. She celebrated the fact that the choice was hers to make! She had control over her body and future; and that’s well worth a toast.

Ananna Sellers – a first-time teller – is a trans woman, but she was raised as a boy, in a household with four sisters. As a child she longed for a brother – someone to share games with those green plastic soldiers. Ananna was psyched when she learned that her Mom was going to have a boy; and she tenderly described the day she met her baby brother.

This brother’s been incarcerated for a number of years, but Ananna still feels a close bond to him and her sisters. She celebrates the way her family’s a team, a cohort. Though she misses her brother badly, she finds ways to appreciate and celebrate what they have.

What’s it like when an almost-near-death experience on an airplane flight ends with a bizarre night out at a themed hotel’s fake medieval banquet? Fifth teller Sunil can tell you! A Midwest Express flight he was on dropped abruptly because of a damaged wing. The plane was going in circles as they made an emergency landing in Denver. Things were lurching and sliding, passengers were screaming and preparing to meet the end…

At times like this, when you’re processing an extreme experience, you also learn about airline protocols. When a flight goes very wrong, all passengers must stay overnight, in one location, so they can be observed and accounted for. Only one hotel in the area had room for all the traumatized travelers.

Like the other passengers, Sunil was a mess. He did notice an odd detail though: the courtesy van driver was wearing a jester hat. Okay…Fine. That made sense when they arrived at a castle. And were greeted by personnel in cone hats and clown suits. Another passenger in shock was greeted heartily: Welcome knights! At that point, Sunil collected himself enough to tell the greeter what they’d just been through, since apparently, they hadn’t been briefed.

The welcome guy pulled off his cone hat. Welcome knights turned to Holy shit are you serious? They finally got to their rooms, after getting meal tickets. Meal? Everyone got a crown to wear. Everyone got oversized goblets and plates of turkey legs to chomp at like banqueting knights of old! At first, it all seemed too much. Too weird. But the wine and a few hours distance from the experience worked magic. Pretty soon, they were toasting and celebrating for real. They were alive!

“Celebrations” was a bilingual slam. The first bilingual slam on Zoom! Josefina Quevedo shared the ways her family celebrated Christmas when she was a child in Puente Grande, Jalisco. They prepared and ate pozole and tamales. They had pinatas, and danced at a bonfire. On Christmas Eve, they ate around 10:00 PM, sharing punch and hugs and fellowship. They performed a Nativity Scene and put the Baby Jesus to sleep. Christmas Day was for visiting neighbors and playing with new toys.

Josefina moved to the United States when she married. She’s been here for 20 years now, and her kids are almost grown. They do many of the same things around the holiday, but frankly, it’s not quite the same here. She misses the extended family. She’s tried to instill the feeling of those Mexican Christmases in her children, but can’t quite do it.

“Reimagining Celebrations” was a competitive slam, and Sunil’s riotous story was the audience favorite. As we all prepare for our first Pandemic Surge Holiday Season, let’s celebrate every win (or non-loss) and create the stories we’ll share in coming seasons.