It was a packed and cozy room inside Bay View’s Sugar Maple as everyone came together to share and hear stories about the topic of karma.

Having a near death experience is bad enough, not getting the proper treatment you need to survive is worse.  Cate Miller explained her near fatal night in a hospital and how she got through it despite being stigmatized for mental illness. 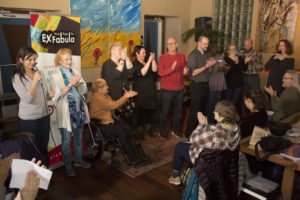 All the storytellers on stage at Sugar Maple

Barbara Leigh painted a glorious picture of putting an ad out for a new roommate after her partner passed away.  When she found one, they turned out to be in their early twenties and played the piano beautifully.  Eventually Leigh and the roommate formed an invaluable bond and friendship.  She wasn’t so lonely after all.  The story resonated with the audience so much that Leigh was voted audience favorite.

Continuing the groove of destined friendship, Anita Groves, a first timer, found her best friend through a Groupon ad searching for a massage therapist.  It ended up being perfect timing, as she and her best friend had both just left their husbands at the same time. 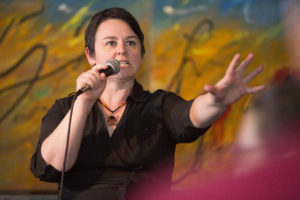 Melissa Yan sharing their story on stage at Sugar Maple

Also a first time storyteller, Melissa Yan painted the audience a picture of what it was like to be an awkward teenager in the ‘80s writing a valentine to a crush and getting rejected in the form of insults.  As karma would have it, years later Yan sees the same person at a local mall and notices he is now the same things he made fun of her for years before.

Bill Stevens once had a job at a bread store where the store’s manager had gotten fired.  His new boss was frankly an idiot and to kill time Stevens started a game where the employees each started their own bread companies.  Stevens put the entire bar in stitches reciting bread company names like “Mostly Bread” ala The Princess Bride. 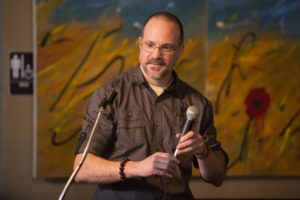 Have you ever found yourself living without a purpose?  Alexander Miller found a Buddhist community center while out to brunch with friends and agreed to attend a meeting.  Eventually he found his spiritual family and talked about shared karma.

Lisa Williams started her story with the comment “karma is not always a bad thing”.  Williams lived in Chicago years before, homeless and afraid to reveal her mental illness to the world.  Eventually she became a substance abuse counselor and volunteered in her free time, changing her karma into a lifelong mission. 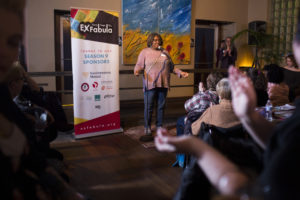 “It’s all about the hustle”, Meghan Koven said as she talked about being a Brownie as a child and having a mother who would have her perfect her pitch to make her cookie quota.  She worked hard to win the top prize and came second to another girl, whose father bought out her supply.

Sometimes karma can end badly.  Richard Kerhin had a crush on a girl and kept getting rejected.  He said horrible things about her in response but she eventually agreed to go on a date with him.  You could say that the night didn’t end well for him due to the unfortunate bodily events to come.

A big thank you to everyone who came out to a sold-out show at Sugar Maple this past Wednesday night.  Our next StorySlam will be on March 22nd at Garfield’s 502 with the theme “TMI”.  We highly encourage you to purchase your tickets ahead of time!