TMI – Too. Much. Information. Rolling out the March 22nd Story Slam, Ex Fabula asked for it, and the story tellers who took the stage at Garfield’s 502 delivered. Body fluids spilled and spewed from body orifices. Boundaries were crossed, privacy was violated, and judging from the constant laughter, a good time was had by all.

Young Kim set the tone, with a story that explored national and ethnic identity, sedately at first. He was born in Alabama to Korean parents. He told us some of the ways that being Asian, his schoolmates and fellow-citizens in the South saw him as different, not American. He didn’t belong, even though he’d never been to Korea!

After college, he got a job that sent him to Korea on business. He was thrilled! Now, he’d fit in. But starting at airport customs, his inability to speak Korean marked him as an American to all he met and he was treated as a foreigner. His digestive system welcomed Korean food for four days, then rebelled, leading to a hilarious turning point in Kim’s story.

Sally Stern says her daughter is always throwing the “TMI” label at her. She’s decided to own that! She went for her mammogram recently. She had to wait quite a while and it was warm in there and she’d heeded the direction that you’re not to wear any deodorant that could skew the image. She described how sad she felt for the mammography technician who seemed to be on the verge of choking due to Sally’s sweat!

Kevin McGee’s story took a different direction – into the shower, getting squeaky clean. He described all the efficiencies of taking babies and toddlers into the shower with their parents to be bathed. One day, he noticed his toddler son noticing him…looking up, down, up, then down again, his gaze focusing repeatedly on his Dad’s crotch. Sizing things up, so to speak. Dad knew what was going on. He assured his son that as he grew, “it” would grow too. His son’s response had everyone present laughing.

Sons! Laeh McHenry was always ready and willing to help out at her sons’ school. She subbed when one of her son’s teachers was absent, and while she’s an artist, she had to help out at a Health class. There was a video to show. Then, the students had to fill out worksheets. She set out art supplies, figuring that once they got through the worksheets, she could teach what she knows and loves best. 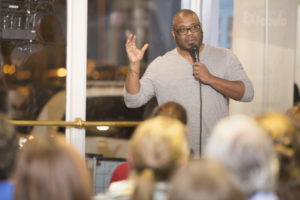 But first, those pesky worksheets! “What should you do to avoid having sexual intercourse?” Why was her son on the floor, hiding under his seat? Why did his friend say “Would you like numbers? Such as 69”? Why couldn’t she have just stuck to art…?

Carl McCorkle is an Army veteran. He is a linguist (Russian), and he was deployed to Kuwait and Iraq in an intelligence unit. He explained the system his unit used to pack their allocation of clothing. It was a pretty meager allotment for a one-year stay in the desert. When Pack B, containing changes of clothing, was lost en-route, he had to make do with what was left in Packs A and C.  Their ration of water was meager too. 2 liters per day, per soldier, in a place where the temperatures reached 118-120F in May! After lots of idle time, his unit was finally assigned to a meaningful mission. Just as they geared up to play the role they were trained for, dysentery joined their ranks. 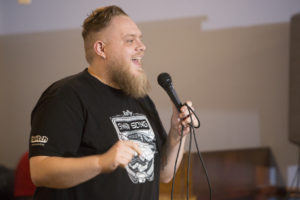 Mike Loranger didn’t mind sharing that he was a nerdy kid who kept his virginity through high school. But his affinity for “World of Warcraft” brought him into contact with a young woman, and they hit it off so well online that she came from her home in the South to meet him in Chicago. They had a great day together in Chicago. At days’ end, they returned to Mike’s grandmother’s house in Fox Lake and enjoyed a home, grandmother-cooked meal. And then – to bed! To give and receive pleasure. Mike learned a lot about things the female body does in pleasure, and he didn’t mind sharing his learning process and positive thoughts about this.

If you traveled from Korea to Chicago, to Elkhart Lake without a break anywhere along the line, you might lose track of things at some point. Mathew Kroupa was on his way to practice, then compete in an event at the Road America track. After an ungodly number of hours without sleep, he finally crashed at a B&B. And woke up naked. Well – not such a big mystery there. He told us he does like to sleep naked. But none of his stuff was in the room. Nothing – no luggage, no wallet, no phone… 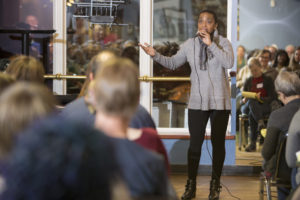 Pete Ferrand recalled a childhood trip with his family and family dog. They stayed at Holiday Inns where the dog was welcome. After dinner at the Inn one evening, they asked the hostess if there were any leftover beef bones the kitchen could spare for their dog. They withdrew to the side while she went to find out. Meanwhile, another party came to the hostess station and stood there waiting to be seated. They were clearly mystified when the hostess came out, and not noticing that they were newly arrived, reported to them that all they had was chicken bones. All they wanted was a seat in the dining room!

We want to thank everyone who made it out to Garfield’s 502.  Be sure to confirm your spot at the next Slam on April 10th at The Times Cinema for the theme “Last Straw”.  You can purchase your tickets on the main Ex Fabula website.  Be sure to check out other Ex Fabula events coming up this spring!