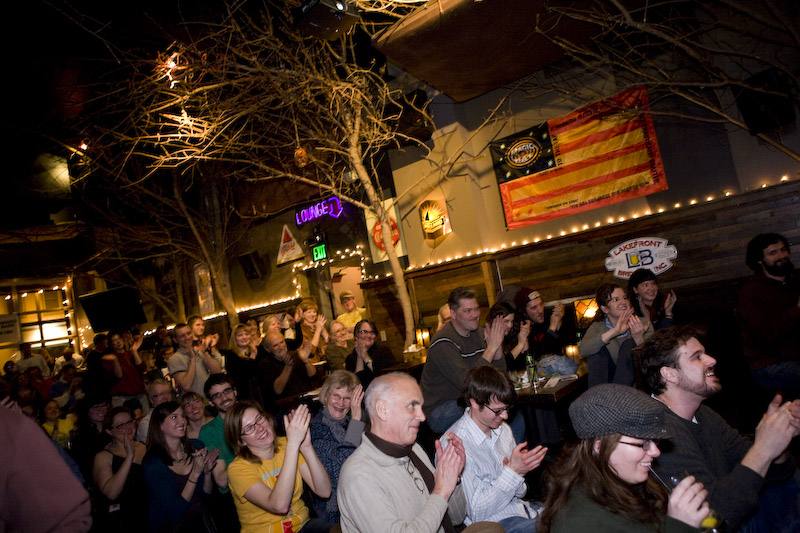 On Tuesday, January 19, 140 people converged on the Hi Hat Garage for the third Ex Fabula event. Sponsored by 91.7 WMSE, 89.7 WUWM, and the Hi Hat, the event brought 11 storytellers to the stage to share true, personal stories related to the theme of “Busted!”

Dylan Bolin kicked off the night with his Solo story about letting it rip on an airplane and the varied reactions of his fellow travelers. Wildflower’s Solo, which took a different spin off the word “Busted”, recounted her history with bras and her decision not to wear one. The “Terkel” format rounded out the first triad of stories, as Adam Carr interviewed his mother Janet. Adam’s parents were a nun and a priest when they met, and he took the opportunity to ask his mother for more details how they each left religious life and eventually married and had 5 children. “We were very ‘straight’,” Janet recalled, referring to her steadfast devotion to the church. “Clearly, you were. I am a testament of this,” Adam quipped. 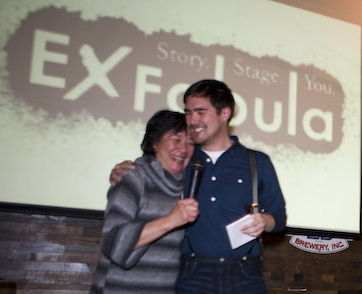 After a short break during which attendees enjoyed beer specials, Bo Johnson took the stage to recount a “Frank Capra Moment”. While waiting for a pizza at Sal’s Pizzeria, Bo was caught doing a good deed and rewarded by the owner. His reward, a 2 liter bottle of soda, was later given to the Ex Fabula Audience Favorite, because as Bo wryly noted, he doesn’t drink cola. Bob Pothier then came to the stage; the first of three audience volunteers whose names were drawn from the hat, Bob talked about the time that he and his spontaneous wife were almost busted skinny dipping in a hot tub. The last event of the triad was the Rashomon, where brother sister duo and Preacher’s Kids John Allen and Amy Schleicher discussed their relationships with their parents and how illegal substances brought the siblings closer together. 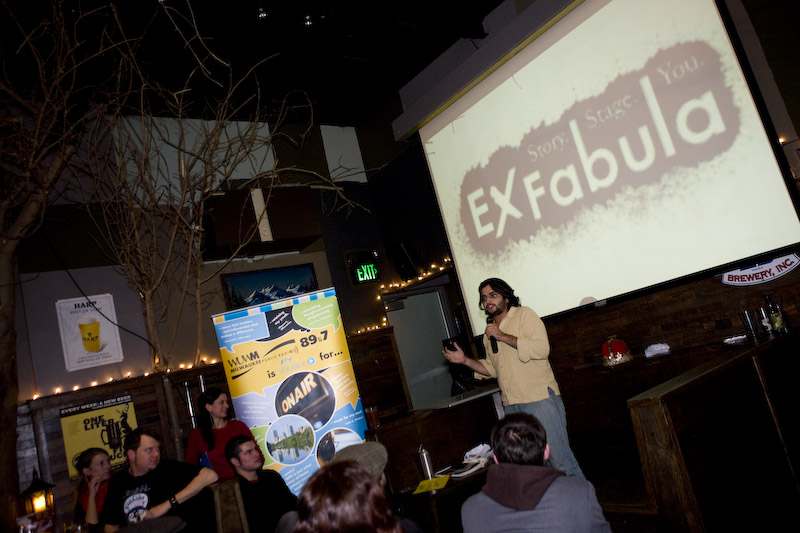 The last three stories of the night were all in Solo format. Emmett Gross came from the audience to chart the hilarious rise and fall of his t-shirt hustling enterprise at Miller Park. Then audience volunteer Deepal Doshi described an early hours incident from back in India when 14 friends gave a fake funeral to a man that appeared to be sleeping; although the man continued sleeping for many hours, Deepal pointed out that “when you’re doing nothing, patience is all you have.” Tom Crawford wrapped up the night with his tale of two teachers, Mrs Goodnature and Mrs Dwyer; a street-smart 7-year-old, he was able to skip school for three days thanks to his ability to tell time. His Scottish father was not amused.

Interspersed with the stories, emcee Megan McGee read Ultra-Short stories written by audience members during the course of the 2-hour event. Some of these Ultra-Shorts will be posted to Facebook and Twitter over the coming weeks. 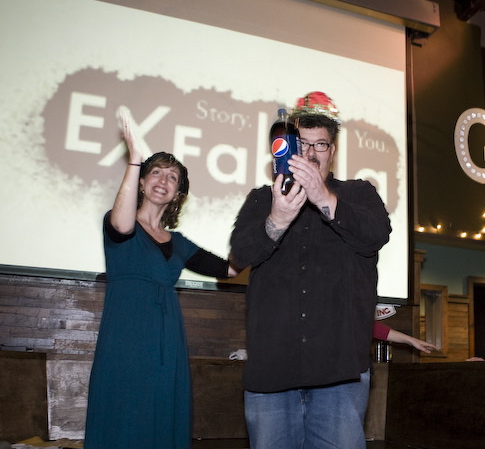 At the end of the night, votes were tallied and in a very tight race, Tom Crawford was crowned the audience favorite.

The fourth Ex Fabula event will be Tuesday February 16 at the Bay View Brew Haus, located at 2535 S Kinnickinnic. The theme will be announced in the next week or so; Ex Fabula fans should feel free to post ideas for themes on the Ex Fabula Facebook page and blog. Ex Fabula founders are Adam Weiss, Amy Schleicher, Leah Delaney, Matt Sabljak and Megan McGee.