This “Summer of COVID”, Ex Fabula and Milwaukee Public Library teamed up to offer virtual storytelling workshops for teens. The StoryBoss workshops were three hours via Zoom each Tuesday, Thursday and Saturday from mid-June to mid-August.

The culmination was a StoryBoss slam on August 11. Nine tellers showcased stories they’d polished up with their coaches. They competed for a cash prize awarded by Ex Fabula judges; and for the glory of being voted audience favorite by listeners.

Soterriah Jones shared her anger and dismay at the sitting POTUS. He came to Milwaukee, did terrible things. He’s evil. She’s had it with his handling of the pandemic; and how it’s shut down so many opportunities to get out and have fun.

Have you ever been bitten by a donkey? Lily Rogers has. When she was nine, she and her brother went with her grandparents to enjoy a vacation out in the country. She was open to exploring the pastures and streams with her brother, but wary of the sheep and donkeys. Turns out, she had good reason to be! She vividly described what it’s like to be approached from behind and sniffed by a donkey…holding very still…only to be bitten! Her brother had run ahead, so she was left alone with the beast, screaming with pain and fury. The donkey’s big teeth left her with a nasty bruise and a good story.

Faithe also talked about good times with grandparents. She’s close to her paternal grandparents, and last October she spent time with them in Iowa. She enjoyed the backyard swing at their house and trick-or-treating. She proved to be braver than her companions when she summoned the nerve to knock at a house where the lights were on and the door was ajar. The elderly couple who came to the door were not only not monsters, but were friendly and shared a lot of candy.

Erick plays the violin. He started because his school required it. His mother pushed him to audition for Milwaukee Youth Symphony. He was hesitant and nervous. He only knew one song and one scale. But he tried and was accepted. He made lots of friends at practices, and gained confidence. His nerves acted up again when they played a concert for hundreds of people at Bayshore Mall. But he built on his earlier success facing challenges, relaxed and played his part. He was proud, as he should be. 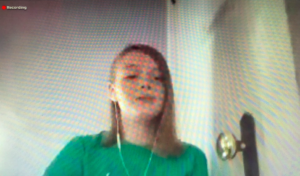 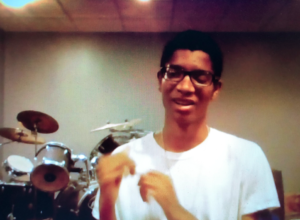 Facing fears! Eli Meadows talked about that too. He got anxious looking ahead to his first day at an all-boys boarding school. He spent sweaty, red-faced weeks anticipating the worst. But: he met his roommate and it turned out they got along! He went to dinner, and the people he didn’t know included him in their conversation. He joined in some games and no one cared about his performance. Eli realized that the fears that had hounded him all summer weren’t necessary!

Rolling with the pressure…that’s what Elijah Franklin did when his French Immersion Tap Dance team competed at the (now gone) BMO Harris Bradley Center. Elijah walked us through his teams’ repeated walks to the green room (going the wrong direction in round #1), and then into the limelight as his crew moved into the quarter finals, semi-finals, then finals! In the semi, then final rounds, first Elijah’s friend, and then Elijah slipped up. Their team took second place. Though Elijah felt responsible for missing first, he was still proud.

Aniela Lira learned about right, wrong and resisting peer pressure when a classmate enlisted her as an accomplice in the theft of some slime. When a teacher and some students made a class project of mixing up a batch, her friend Anna was determined to steal it! And she did, even though Aniela tried to talk her out of it. That “friend” pressured Aniela into hiding the stolen slime for her. She hid it in her lunchbox.

The teacher told everyone that whoever had taken the slime should return it. Aniela took it out of her lunchbox, meaning to give it to Anna and make her give it back. But a boy saw her and told the teacher, who asked for a conference with Aniela. She won’t let friends lead her astray again!

Meira Meadows and her five siblings were missing their aunt in Thiensville as the Safer-at-Home routine dragged on. They decided to make a special meal and drop it off for her. They worked all day making an Israeli feast, pulling out all the stops! One of the delicacies was a special dip, Harissa, which can be pretty fiery. So fiery that Meira, who doesn’t tolerate spicy food, made sure they labeled that container with a warning. They packed it up, and schlepped it down her aunt’s long driveway (their driver didn’t like the rough road). Her aunt was puzzled (did you walk here?) and delighted. They’re going to try to do it every week!

Omari, a Congolese refugee, discussed both the trials and rewards of growing up in the largest refugee camp in East Africa. The trials were many – lack of clean water, not enough food and little access to education. On the other hand, Omari reflected that he got to meet and live with people from all over; sharing and learning from each other’s experiences. He arrived in the United States in 2016 and immediately applied himself to learning English, and about American culture. He’s thankful to be here.

Back in January, Kyla (KE) and her friends went to their first major concert together – the Pray for the Wicked Tour. Her friend’s Mom took them to FiServ Forum two hours early since she worked there. It was pretty cold to wait outside, but she and her friends made some new friends, got burgers and fries, then ran into other school friends. It just kept getting better!

The lead singer rising from under the stage, the songs that meant so much to her, performed live, going over it all afterwards…sharing perspectives, dumping $150 on merch! Kyla conveyed all the joy of sharing music and moments. It was all the more poignant knowing we won’t gather like that again any time soon.

When the storytelling was done, Lily was awarded first place by the judges. Thanks, donkey! Aniela’s story of crime and slime was the audience favorite. Erick, Elijah and Eli were in a three-way tie for second place. As far as I’m concerned, everyone involved is truly a StoryBoss .

Want to collaborate? Bring us to your school or organization! Contact us HERE