Ex Fabula had to go virtual back in April. Now fall approaches. COVID still rules. Pandemic life has forced us to re-structure, re-evaluate and re-imagine all aspects of our lives. Getting right to the thing that makes the world turn, Season 12 kicked off (on the screen) with “Love Reimagined” as the theme.

After a trying divorce, it took first teller Paul Race a while to start dating. It was another long while before he met anyone he wanted to bring around his young daughter. The time he finally made a promising connection with a woman coincided with his parents’ onset of dementia. His mother also suffered from GI tract problems and had to endure unpleasant tests.

Paul was unburdening himself to his girlfriend one day. The doctors needed a stool specimen from his mother. The instructions were daunting, plus it was his mother. Paul knew his relationship was rising to a new level when she – a nurse – offered to handle this for him. She followed through, as Paul explained things to his dismayed father and squirmed through the awkwardness of the situation. That’s when you know someone’s there for you. Twenty years later, they’re still together. 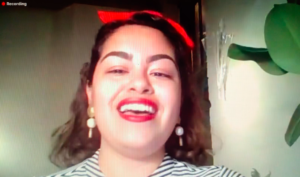 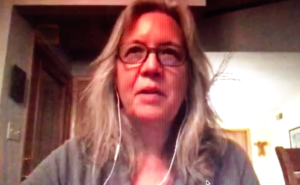 When luscely Flores was nineteen, she went to a Quinceanera with a friend. At the after party she laid eyes on a man who made her feel all

kinds of ways! Chemistry…excitement. But she only got his first name. She had to find him again. How?

She put all her networks on the case. Then one day, he came into the Home Depot where she worked. She tried to get her name and number to him on some register tape, but he left too soon. Finally, through skillful use of Instagram she found him and connected. They dated, then traveled together – New York, Houston, Tennessee, the Smoky Mountains. They were each other’s perfect travel companion.

It looked like they’d be perfect life companions, but when they approached the subject of marriage, he got cold feet. Iuscely is undocumented. And her love is wheelchair bound. The only way luscely could become a citizen would be to marry. If he married, he’d lose important benefits he depends on. They consulted lawyer after lawyer, but our system has nothing to offer but impossible compromises. They are best friends. They count on each other, lift each other up, share meals…and together imagine a world we have yet to create – where love is free.

Pets. For 20 years Meghan Koven lived alone, not certain she’d find a human companion to share her life with. She was nourished by canine companions. First, she rescued Ginger. Ginger was her first dog and they shared three years before Ginger succumbed to an illness that ravaged her towards the end. Then Meghan got Carly Jane – the “best dog in the world”, an angel with literally NO problem behaviors.

Dogs! They obviously, fully live in the moment, never looking back or worrying about what might come next. It’s an example Meghan has learned from over and over again.

Then Meghan met Shel! A human to love. Though close to perfect, Shel wasn’t a “dog person”. Shel found dogs to be kind of gross (which of course they are). There are two things Shel does that Meghan doesn’t: walks a lot and baby-talks.

Carly Jane loves to walk, and loves the baby-talk! Over time, you could say Carly Jane ditched Meghan for Shel, the non-dog person. Meghan sees this bittersweet situation as a metaphor for the ways that various forms of love ebb and flow in our lives.

Being dependable, coming through with what you promise is a form of love…When sixth-grade Sarah Beth Nelson and two boys in her class planned a skit about Abe Lincoln to perform at school, Sarah got sick and sicker as performance day approached. Don’t worry miserable, feverish Sarah told them. Only way I won’t come is if I’m dead!

Sick as she was, Sarah got on the school bus that day. Which happened to be the day the school bus rear-ended a car stopped at a four-way intersection. The minor accident didn’t kill Sarah (or anyone) but when she finally arrived at school late, the boys looked at her as if she was a ghost. When she didn’t appear on time, they’d assumed she really was dead.

Sarah was already hooked on telling stories, and she was eager to share at dinner with her family that night. Mom kept interrupting her, pushing her to give away the ending was everyone OK? Did anyone get hurt? Sarah resisted…premature reassurance messed up the flow. Now Sarah’s responsible to her children, her spouse, her students…and coming through with what you promise – no matter what – is still important to her.

Mark Steidl was single, but he had good friends trying to set him up. They got him on a double date, but the woman they chose for him – no chemistry. No connection. Their attempts to dance together were worse than uninspiring. However, those friends who set him up got engaged. They threw a pre-wedding party to celebrate. Unbeknownst to Mark, they were still thinking of him.

The woman he hadn’t hit it off with – Jill – had a friend Nadine. Jill told Nadine you might like him. He’s annoying. Like you. Well guess what! Annoying fell for annoying! They spoke freely…connected…danced beautifully. He proposed six weeks later and before long, they danced at their own wedding.

Elaine Maly told us about when her beloved grandmother’s memory began to fade. Her grandmother had been her best pal, sharing a love of books and stories. Each time Elaine visited her in assisted living, she’d correct her grandmother’s inaccurate statements. As soon as she left, Elaine would cry, feeling the loss of companionship.

Many years after her grandparents passed, a friend told Elaine about “Time Slips”, and a practice called Creative Engagement. Pioneered by UWM’s own Anne Basting, Time Slips engages people with dementia in storytelling, rather than reminiscing. Elaine took the training and saw the wonderful things that happened when elders were invited to create stories in a process where there are no wrong answers.

Elaine thought about how different things might’ve been if she’d known about Time Slips when her grandmother aged. But she was able to apply these lessons for her father. When he cradled a towel, and explained it was his dog, Sport, Elaine knew what to do. “Sport” became part of the family…a shared joy, not an occasion for corrections.

The tellers lined up to summarize their stories: Paul: “Love and a stool sample”, Iuscely: “Love should be free”, Meghan: “My dog left me”, Sarah: “Except when dead”, Mark: “one-night annoying soulmate” and Elaine: “Forget memory, try imagination”.  Our tellers covered a lot of ground. The audience voted for their favorites and the season kickoff ended in a tie between Luscely and Elaine.