If there’s one thing Ex Fabula has brought to the Milwaukee community over the past nine seasons, it’s connections. Stories are the connective tissue that hold our families, neighborhoods, and communities together. So there was no more fitting theme for the Season 9 ALL STARS event than “Connection.” 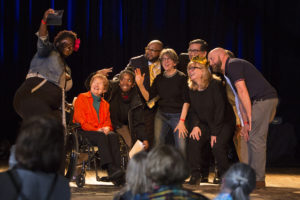 All Stars Storytellers and Emcees Taking A Selfie On Stage

The event was held May 18, 2018, at a packed Turner Hall Ballroom. Before it began, audience members were asked by emcees Tiffany and Davidto greet those sitting around them, encouraging even more connections between attendees. The ALL STARS event featured new stories by audience favorites from regular season StorySlams. These fantastic and engaging tellers competed for the crown of Season 9 Audience Favorite – each of them upping their oratorical game to raise the collective storytelling bar.

How could 20 seconds of embarrassing bravery change your life? Our first teller, Young Kim, knows the answer first hand. He spent most of his adult life avoiding romantic risks, until recently, when he met someone who inspired him to have the insane courage to wear his heart on his sleeve. With a story both hilarious and heartbreaking, Young discovered that the truth can set you free. 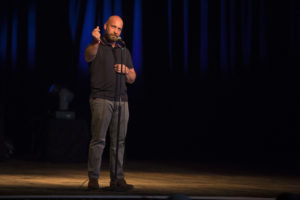 Richard Kerhin on stage at May All Stars

The next teller, Richard Kerhin, has also done some emotional digging to find the truth – about his cocaine addiction. Getting to the root of why he was using, and his belief in love, is what helped him to stop. What keeps him going is the connections he has, and he credits Ex Fabula with connecting him with a storytelling community that has inspired him to feel worthy of love.

Loving connections with siblings are some of the strongest we’ll ever have. For Tony Anderson, the memories of jokes played and relationship advice given by his older brother Bruce in their adolescence left a lasting imprint on his adult life. Tony also learned a lot about resilience and strength from his other brother, D, in more recent years, after the tragic death of their father and Bruce in a car accident.

Death can have an effect on familial connections – as Patti M. Rosenberg learned after her husband, Stan, passed away. Connecting with their sons at that time was difficult if not impossible. But a mix-up with a medicine bottle full of marijuana that made it through TSA on the trip to spread her late husband’s ashes brought them together, as she explained with a self-deprecating delivery that had the audience in stitches. “I’m a mule!” she exclaimed.

A life-changing event can shift your trajectory in ways you never could have predicted. For Barbara Leigh, that event was a car accident that left her partially paralyzed and wheelchair bound. As she recovered and learned to live with her new reality, Barbara decided to pursue her passion for theater. She created a show based on her life, which has toured around the country, allowing her to connect with all sorts of people.

Sloppy handwriting is rarely something to brag about. In Eugene Pitchford’s case, however, his clumsy penmanship was the one thing to save him from being arrested for trying to rob a bank. His story recalled his first year of teaching, and his excitement about getting paid a full-time teacher’s salary. What started as an innocent trip to the bank during the lunch hour turned into a deposit slip-induced nightmare involving bank security and the police.

Sometimes, the desire to disconnect can have unintended consequences. When final teller Mel Miskimen set off for Dublin on a solo trip for some time away from her husband and sons, she never imagined she would spend hours every day talking to her husband on the phone (using a pre-paid phone card, of course) – or that her biggest Irish adventure would involve trying to settle a $3,000 phone bill from her hotel. 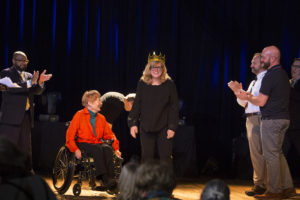 Patricia M. Rosenberg, Winner of 2018 May All Stars

During a short break to collect audience votes, Carolina Mulvey-Videlawas honored for her two years of dedication and hard work as the Ex Fabula Community Connector and Public Ally. Carolina is moving on in a few months and will be missed immensely by the local storytelling community.

Without further ado, Patti M. Rosenberg, aka “The Mule,” was crowned the ALL STARS Season 9 winner! Congratulations to Patti and all of the other Season 9 ALL STARS, and thank you for your willingness to connect, laugh, cry and love through the power of storytelling.

Special thanks to season sponsors as well as ALL STAR event sponsors.